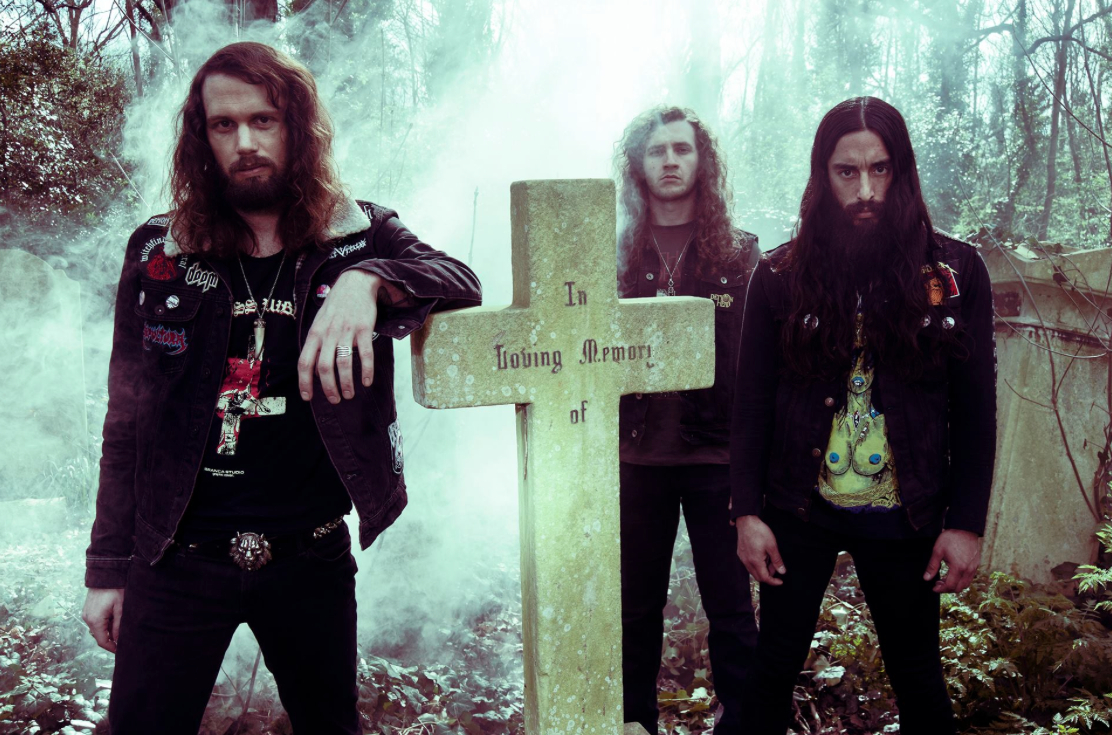 When you think ‘horror,’ you don’t necessarily think Fresno.

But Fresno’s Beastmaker is one of the best up-and-comers in all of doom and horror metal right now, and with the release of their stellar debut album, Lusus Naturae, back in March, you’d do well to check them out now before they start to outgrow places like the Empty Bottle.

Naturae drips with witches, creatures from Hell, and generally evil imagery that the band’s understated, menacing live set captured beautifully. Shrouded entirely in darkness save for a few spare color cells and a whole lot of fog, singer/guitarist Trevor Church, bassist John Tucker, and drummer Andres Alejandro Saldate (a.k.a. Juan Bonham) delivered their doom-laden, Sabbath-style riffs with a whole lot of volume. I mean, a whole lot. Seriously, it was the loudest show I’ve ever seen at the Empty Bottle, hypnotically so, and it gave songs like singles “You Must Sin” and “The Mask of Satan,” as well as the bulldozing set-closer “It” an added layer of punch.

Currently in the middle of their first North American tour, we caught up with singer/guitarist Trevor Church to discuss horror, the importance of imagery to the band’s sound, and touring America vs. touring Europe.

Christopher David (In the Loop): So you guys are from Fresno. Is there a scene there that supports this kind of music, or are you outliers in that sense that you’re the only ones doing what you do out there?

Trevor Church (Beastmaker): Playing in Fresno is like playing to a crowd of…nothing. A lot of death metal, but even that scene—it’s usually all bands and musicians attending those shows. There’s been a lot of venues closing, lately, and it’s fucked up, because the owners of the venues are often the promoters for the shows, or they’ve personally hired someone, and then they’re gone. There’s still one good venue, but they only do two or three stoner/doom metal shows a year, and we get on those bills, but it’s few and far between.

ITL: So you’ve been forced to focus your attention outside of that area.

TC: Yeah, we mainly play L.A., Oakland, San Francisco, Sacramento. Fresno is centrally located, so three hours and we’re in each of those places, and we can come home the same night – which is exhausting, but we do what we have to do. If we want to do this, there’s no other way.

ITL: Even though there are a lot of bands and venues in Chicago, we deal with that, too. There’s oversaturation here, so you’re going to Milwaukee, Rockford, Champaign, playing this little belt of other, accessible markets to stay going.

TC: A lot of this music feels like it’s dying here in the States. We’ve been working on some new merch for the fall with a message of bringing “doom” back to America! It’s weird, when we started, we didn’t really start out intending to be a “doom metal” band. I just wanted to be an old-school metal band, but we kinda just got thrown in there with it, and it actually feels right. I feel like there are very few doing the ‘horror’ aspect like we are, though.

ITL: That’s true, and that’s a great niche, and the great thing about that is that horror fans are typically very loyal. The video for “The Mask of Satan” incorporates a lot of that.

TC: Oh, yeah. Hopefully in the future, we’ll be able to get the rights to Black Sunday (NOTE: 1960’s Black Sunday is considered one of horror director Mario Bava’s masterpieces). I rarely write directly about movies, it’s usually my own short-story type ideas that are sometimes inspired by that stuff. We just didn’t have the means here in the States to do it. Rise Above gets away with a lot in Europe – it’s in the States where things are a lot stricter with regard to the use of that stuff. Uncle Acid went through the same thing with the video for “Melody Lane.” From our perspective, we’re trying to bring this stuff back in front of people, and no one’s making millions of dollars.
When we get home, we’re going to start trying to really bring more the video element in what Beastmaker is about. With Branca Studios, we have such a kindred friendship that I don’t really have to tell them what I want. And you’re right, I think, there are people who are into the horror genre who are approaching us now. The guy that did the video for “The Mask of Satan,” for example, wanted us to come to England, and that was way more than our budget allowed for. The imagery is really important to me, and we want it to be completely original.

ITL: The imagery ties into your sound so perfectly, and there are definitely a lot of horror fans out there ready to support the kind of band you are. It’s an underserved market as far as that goes.

TC: Off the top of my head, the only other band in California I can think of is Orchid, and I’m friends with those guys. That’s a big deal to me, to have a band that I really love in our backyard like that, they follow us, and we do the same. Other than that, California is more into the stoner-psyche thing, and we get thrown into that, and I start to feel like a bit of an outcast. Then we go to Europe and we play with Blood Ceremony, that kind of band, and I feel like, ‘this is home.’

ITL: Have you guys seen a lot of support from European fans?

TC: Oh, it’s like a whole other ballgame. We’ve been seeing it a lot on this tour. I was really skeptical at first, because of how Fresno is, and I don’t know what other towns have. I’ll tell you the best venue in the United States we’ve seen so far is Saint Vitus in New York. The décor, the vibe, I came alive there. We’ve been meeting a lot of people younger and older who have been into metal for a long time. It makes me want to tour the U.S. again. Though maybe not in the summer again. *laughs*

ITL: Especially in the South, I would imagine.

TC: The South was brutal. We started in the Northwest, beautiful weather, and then you get down south and you never stop sweating.

ITL: New Orleans is worth it.

TC: The people in New Orleans are fucking awesome. I will drive that far out of my way any day for the kind of love they give the bands. Music is our whole life, so whatever we have to deal with, I’ll tolerate it.

For more on Beastmaker, including the current tour and album, click here

To hear the new album, here