Writers’ “Next to Normal” a Moving Staging of an Important Work 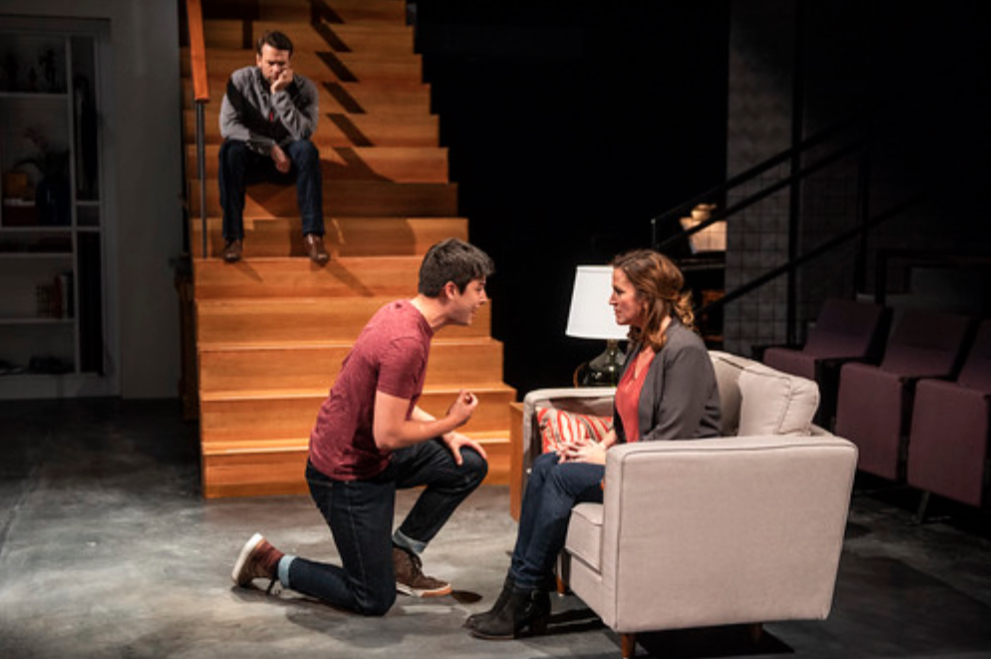 When “Next to Normal” debuted on Broadway in 2009, it enjoyed an uncommon level of success – three Tony awards, the Pulitzer Prize for drama, and numerous re-stagings across the country. And in seeing a fresh production of the musical at Writers Theatre in Glencoe, I was reminded of why the musical was such a hit, and why it continues to attract audiences a decade later: remarkably powerful and uncompromising, the show (music by Tom Kitt, book and lyrics by Brian Yorkey) is one of the fullest realizations I’ve ever seen of Stephen Sondheim’s 1980s innovations, and although Writers’ staging has some flaws, its inventiveness and performers do the show’s legacy proud.

Set in a prototypical American suburb, “Next to Normal” opens with a scene that is, for most audiences, quite familiar: mother Diana Goodman (Keely Vasquez) sits on the steps of her home, awaiting the early morning arrival of her rebellious son Gabe (Liam Oh); her daughter, the ultra-ambitious, ultra-sassy Natalie (the dynamic Kyrie Courter), awakes early to finish her homework; and her seemingly befuddled husband, Dan (David Schlumpf), checks in on her…and races back to the room when she promises sex. A song (the famous “Just Another Day”) bubbles out of the activities, until something unexpected happens – Diana, in a fit of hysterics, begins making several ham and cheese sandwiches on the kitchen floor, her motions increasingly hurried, frantic.

It’s the first introduction of Diana’s mental illness, and over the course of the musical’s two and a half hours, Kitt and Yorkey peel back the layers of Diana’s neuroses with brutal realism, exploring her endless list of medications, her weeks of therapy, and how her illness – and the tragedy at the center of it – has been slowly tearing her family apart.

Clearly, this is a musical with heavy themes on its mind, and David Cromer’s direction handles those many elements with energy and sympathy. A Tony award-winner for “The Band’s Visit,” Cromer’s touch is most evident in the show’s choreography, and how it complements Regina García’s dynamic scenic design. Using the vertical nature of the Writers stage to its full potential, Cromer’s actors move up, down, and around the circular area, as Keith Parham’s brilliant lighting brings out unexpected contours and surprises to the material. For a musical as layered and nuanced as this, it is thrilling seeing the staging and choreography intensify the themes.

The ambitious staging, though, also contributes to the one weakness of this production: the sometimes awkward balance of Andra Velis Simon’s musical direction and Cromer’s actors. Vasquez and Schlumpf are both very capable actors, and they wring an impressive depth of emotion from their characters; they are also, however, relatively thin-voiced, and their singing is often overpowered by the musicians. Furthermore, Cromer’s direction often has the actors spread out across the performing space, and with the musicians then entering that void, it can be difficult making out the intricacies of Yorkey’s lyrics. I’m sure Cromer and his team will find the right audio balance in subsequent performances, but the effect on opening night was occasionally frustrating.

It’s a small part, though, of a brilliant, daring musical, one that is absolutely worth your time.