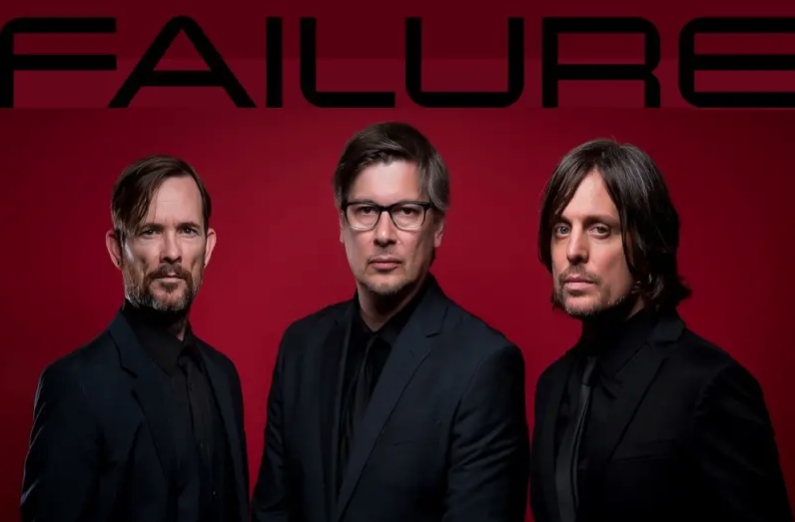 Unbound to any generation, scene or movement, Failure build upon an enduring catalog of inventive, inimitable and intriguing albums, as relevant today as they will be tomorrow.

programming], Greg Edwards [vocals, guitar, bass, keys] and Kellii Scott [drums, percussion] – have inhabited a universe of their own, orbited by seminal albums such as Comfort [1992], Magnified [1994] and Fantastic Planet [1996]. The latter received a rare 5-out-of-5 rating from Alternative Press as the group earned the public adoration of everyone from regular tour mates and friends Tool to Depeche Mode who openly praised the band for their cover of “Enjoy The Silence”. Following a 17-year hiatus, 2015’s The Heart Is A Monster re-established the band as a sought-after headliner in addition to attracting the praise of Rolling Stone, Pitchfork and Entertainment Weekly, to name a few. 2018 saw Failure continue forging ahead, releasing their fifth full-length album: In The Future Your Body Will Be The Furthest Thing From Your Mind.

In keeping with this spirit, the latest body of work represents a significant first for the three-piece. For the first time, they released music in “quadrants” as four EPs throughout 2018, namely In The Future, Your Body Will Be, The Furthest Thing and From Your Mind. The final piece would be consumed within days of its completion.

Steeped in the band’s own unique and evolving tradition, In The Future Your Body Will Be The Furthest Thing From Your Mind signals another natural leap for Failure. Stated in a recent RollingStone interview,“Beyond excited to play the new material live,” Failure’s Ken Andrews said in a statement. “I feel, as all artists should, this new album is our best work to date, pushing our sound into challenging new spaces. If early rehearsals are any indication of what’s to come, I think our fans are going to be very pleased.” As with all of their music, it will continue to ring out for a long time to come. “When you listen to us, I’d like for you to be intrigued,” Ken leaves off. “To really appreciate what we’re doing, I feel like you have to listen to it a few times. You have to really dig in and stay a while to get the reward.”

Join JBTV at 6:30PM on April 4th as we welcome Failure back to the studio for a second performance!