Indie Brit-Pop Band, Wolf Alice, Returns To Chicago With An Increasingly Building Fan Base That Sells Out The Metro 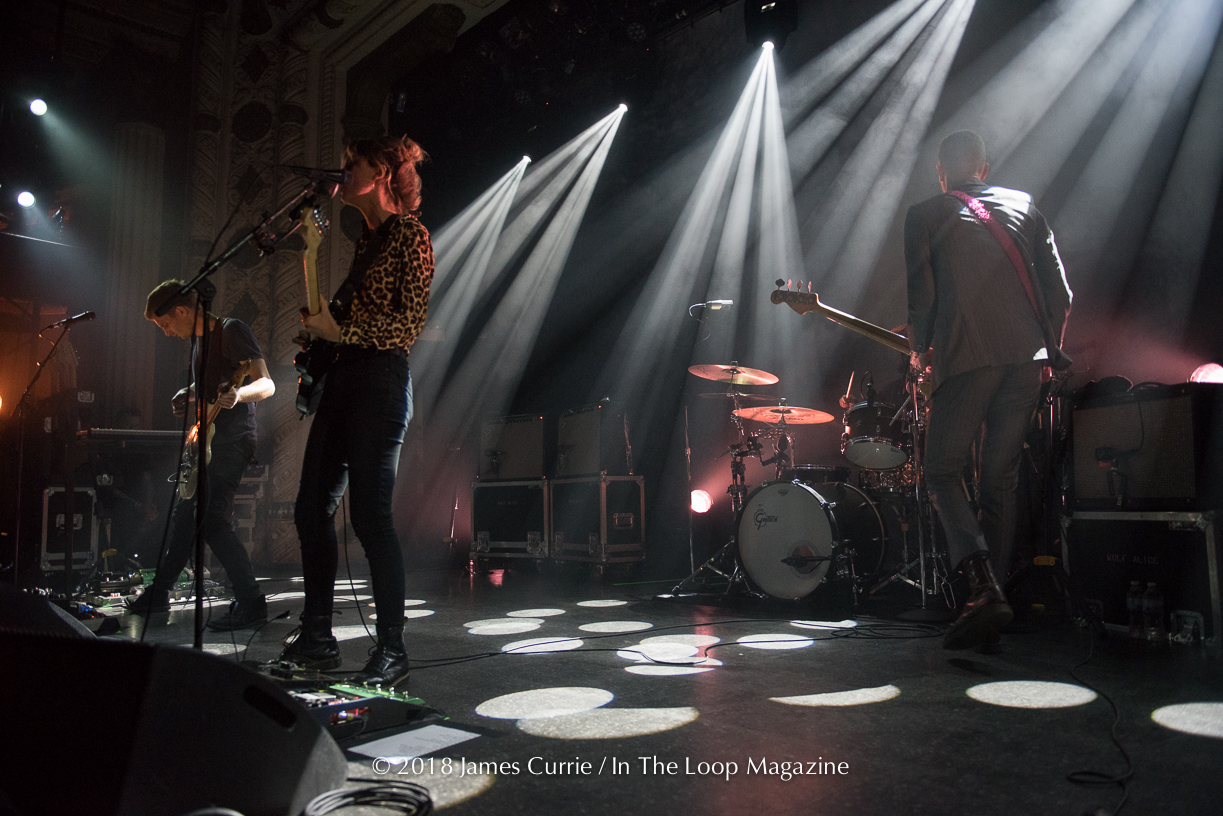 I have seen many great acts come through the Metro, but none have been greater than the English quartet, Wolf Alice. Touring in support of their recent release, Visions of a Life¸ the protean band graced the stage last night in a sold-out show with their blend of shoegaze, punk, and good old Britpop. Joined by their compatriots, The Big Pink, both bands lit the venue with energy and electricity. The audience was enraptured and so was I.

Along with Wolf Alice, The Big Pink emerged onstage amidst a haze of dark, violet light and opened the show with some powerful rock. Seeing them onstage was perhaps the biggest surprise for me personally since I believed they had broken up five or six years ago after the release of their second album Future This. In fact, I first came across this band at a rummage sale back home in Connecticut a few years ago. For some reason, this particular sale resold “damaged” and returned goods from Urban Outfitters and American Eagle, mainly clothes, shoes and sometimes brand new, unsold records as well.

One day, I poked through a box of these new records, which, unfortunately, only consisted of Frankie Rose’s Interstellar, EMA’s Past Life Martyred Saints, and The Big Pink’s Future This. Having heard none of these bands before but still curious, I decided to buy Interstellar for its gnarly cover and Future This, for two simple reasons: 4AD was the label and Paul Epworth was the producer listed. When my brother saw me with these albums, he threw a hissy fit. “Why the hell are you buying these albums when you don’t even know the fucking bands?” He whined. Because he was unfamiliar with how his wiser older brother operated, I said, “Hey man, they’re like five bucks.” When I got home and played them, both those albums were surprisingly good. However, I was relieved with how well my hunch for Future This paid off since the album was immensely decent and turned out to be an underrated electropop gem. There were a number of great songs on the album, “Rubbernecking”, “Stay Gold”, “Hit the Ground (Superman)”, and the best,“Give It Up”. When I learned more about The Big Pink, I was dismayed to find out about the critical backlash Future This received and believed that was the reason why I found all these records of theirs at this random rummage sale in a backwater Connecticut town. In the years afterwards, I lost touch with what the band was up to and it wasn’t until I was at the Metro, reading their name on the marquee, when I realized, “Hey, this band still exists!” On a stranger note also, Frankie Rose is slated to play at the Metro as well. It is funny how life turns out!

Back to the Big Pink. When they began to play, I was surprised to see that the morose duo that was on the cover of Future This turned out to be a trio onstage, with one half of that duo, the guitarist Robbie Furze and the other half, Milo Cordell absent. Furthermore, their sound was not the heavy expansive electropop rush I expected but a more conventional rock sound. Some of their songs such as “Dominoes” switched from a decadent electronic anthem into a rather derivative, but nonetheless epic rock sound. To put it bluntly, The Big Pink I saw and heard onstage was not the fantastic band I heard on their record. They were two different bands to the point where I was frantically googling the names of other bands named “The Big Pink” to see if maybe I was confusing them with some other band. Nope, they were still the same band, but with a different sound. Future This was nowhere to be heard and much of their set consisted of new material from Empire Underground. Dismayed as I was, there were a few standouts such as the soaring epic, “Hightimes”, which proved a good listen, but again sounded no different from any other rock song playing now. In essence, their decadent, lush electronic character was gone and I was disappointed.

After the Big Pink, a hush fell across the audience as they waited for Wolf Alice to take the stage. The air was tense with anticipation, nervous laughter erupted in different places, and mothers were hanging onto their kids, hoping their innocence would remain uncorrupted by the onslaught of rock about to take place. When the onslaught began, it started as a minor ripple as the band walked to the stage. The quartet took their places with the singer Ellie Rowsell standing in the middle, looking like a forlorn, haggard beauty with her eyeshade and leopard print shirt. Wolf Alice began with “Heavenward” a soaring magisterial epic made even more so with Rowsell’s wondrous voice, that hearkened back to the shoegaze tide of My Bloody Valentine and Ride. They then switched tacks with the snarling punk royale “Yuk Foo” which would have been an abrupt uncomfortable shift had it not been for just how brilliant the band played. The bass thundered, the drums boomed, the guitar crackled, and while this flow of epic music poured, Rowsell stood above it all as she strode across the stage detached and unbothered by the clamor of the audience.

Every band I have seen had their weak points, but with Wolf Alice, every song was brilliant and their presence scorched the Metro like a wildfire. “Don’t Delete the Kisses”, was glorious, especially when hearing Rowsell’s voice live. It was unbelievable. It flew and carried the audience with it. My favorite songs, “Planet Hunter”, a stunning shoegaze epic and the psychedelic “Sadboy” took on new life listening to them live. The frenzied finish of “Sadboy” already epic on the album Visions of a Life, was turned into a cathedral of brilliance as the music roared and swept across the entire hall. While they hit all of their great hits, the real show did not begin until the latter half of their set, when they turned the dial from shoegaze to punk. From that point on, I have no idea what happened during the rest of that set. I tore off my earplugs and dove into the mosh pit as the music roared and thundered like a freight train. The rest of the set was all a wondrous blur and while everyone was colliding with each other ad throwing glitter bombs left and right, Wolf Alice came to life. The bassist ran to the front of the stage, egging the audience to get even more hyped. The energy was so overwhelming, that even Ellie Rowsell shed her aloof bearing, jumped in the audience and crowdsurfed while singing, “Giant Peach”, from My Love is Cool. It was brilliant.

When the show was over, the eyes of everyone in the audience were gleaming with enlightenment. In the end, Wolf Alice is poised to be the greatest English band to have emerged since Oasis. They are the quintessential protean band, hopping effortlessly between shoegaze, punk, and the Britpop of Oasis, the Verve, and everything else. In short, Wolf Alice embodies every great English band one can think of. They are England and for those of us lucky to see them last night was to see the progress of a rock band on a meteoric path to greatness.

EDITORS NOTE: In The Loop Magazine has been following Wolf Alice just about since their debut in the States. We’ve been watching their growth since the first show at Subterranean then over to Lincoln Hall, Lollapalooza and now the Metro. This is a band we believe in and strongly support. There is a reason. You should come out and see for yourself if you haven’t already.

For more on Wolf Alice, the current tour and latest album, click here

For photos from the live show at the Metro, click here