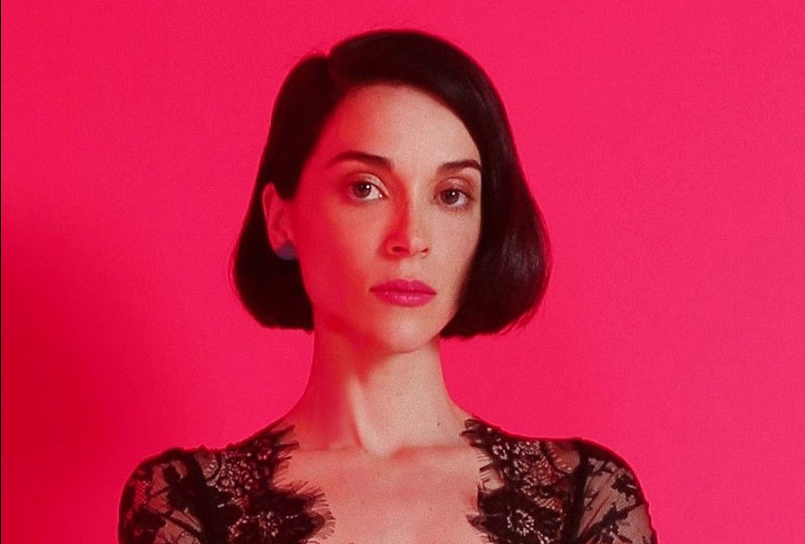 The list of artists who have used the twin pillars of fame and celebrity to play around with the ideas of fame and celebrity is long – beginning, arguably, with the late, great(est) David Bowie and Ziggy Stardust, the alter-ego his fame had allowed him to create, and which gave him the greatest fame of his storied career. Do it too early in your career, and it may come across as ironic, indie-rock nonsense. Do it too late in your career, and you come across as desperate. Timing is everything, when it comes to using the platform of rock-stardom to playfully mock— and thereby unironically align oneself with—rock-stardom.

Thankfully for all of us, Annie Clark—otherwise known to the world as St. Vincent—has nailed her timing.

To anyone paying attention over the course of Clark’s first four albums leading up to last year’s electro-pop masterpiece Masseduction, her ascent to stardom has been something to watch, her records ever-evolving slabs of intricately written and elegantly executed studio porn, with hooks that consistently defy genre and a style that falls somewhere between Kate Bush and Prince filtered through the cold electronica of ‘80s Gary Numan. And at her Chicago stop on the Masseduction tour this past Friday, Clark proved how and why she’s headed toward permanent membership in that elite club of artists who will forever write their own rules.

Entering the Chicago Theatre, concertgoers were given old-school, xeroxed ‘programs’ for the show, akin to that of a high school drama club on pink paper with ransom note lettering, that laid out the show in three acts. First was “Genesis,” i.e. the openers – Clark’s own aunt and uncle, acoustic duo Tuck and Patti, with whom Clark spent her formative years touring and learning the nuance of performance. For part two (titled “Fear”), Clark took the stage, alone, in a pink leather outfit that wouldn’t have looked out of place on Sheila E. circa 1985. Opening with a set of greatest hits from her first four albums, the stage gradually unfolded in curtained- off sections, with Clark moving from mic to mic, a visual representation of her movement across the stage.

Then, part three, titled “Fantasy”: Masseduction, “performed as a multimedia piece, my live ‘Lemonade.’” As a mission statement, it couldn’t have been clearer, and for the remainder of the night, the crowd watched as Clark, on a circular center-stage, backdropped by mini-movies depicting creepily futuristic mockeries of show prep, makeup chairs, plastic surgery, and album promotion (one song featured Clark approaching a bank of press conference microphones before vomiting pink paint and glitter), work through the entirety of the new record. The whole thing had a decidedly David-Lynchian atmosphere, of characters who knew they were characters singing to an audience, of a lone artist delivering her vision of the world, herself, and our collective consciousness through a deliberate filter of artificiality.

To that end, notice that, earlier, I said she was alone. She was, indeed: there was no band for this show, nothing but Clark and her guitar, with the entire backing band on tape or behind the scenes, highlighting the fact that St. Vincent is an entity unto herself but not alone – and as a statement on our current culture’s obsession with celebrity through the filter of social media and web ‘presence’ (which, let’s be honest, is anything but real), it was as much as masterpiece of performance art as the album itself. Not that Clark wasn’t there in body and spirit – she was more than appreciative, telling the crowd of her love of Chicago before introducing “New York” – because as the program said, “we all get to decide what power looks like on us and for us.”

And of course, let us not leave her guitar-playing in the dust, because as anyone who saw her SNL performances a few years ago knows, she has weirdly incredible chops, a propensity toward a kind of mechanical, ear-wormy riffage that comes out at random intervals and halts everyone in their tracks. A clear subscriber to the less-is-more school of melodic soloing ala

The Edge and Mike Campbell, Clark never fails to surprise in her phase-shifting moments of inspiration.

A great part of the pleasure in this performance was the very performer-esque aspect of it, subtle at times and overt at others. A freshly-coifed St. Vincent answered phones on a video loop during “Young Lover” and sported fresh plastic-surgery bandages during a room-shaking “Los Ageless,” and earlier in the show, Clark stood at one end of the spotlit stage, singing the refrain from “Cheerleader” at a giant, shadow version of herself on the opposite curtain. “I don’t want to be a cheerleader no more,” she wailed at a larger, less-defined version of herself, the symbolism of which should have been lost on no one. To cop from a certain Starman’s promo materials circa 1972, “Annie Clark is St. Vincent. St. Vincent is Annie Clark.” May that line remain blurred as we watch one of the best artists of our time continue growing into whatever her fantasy decides she should be.