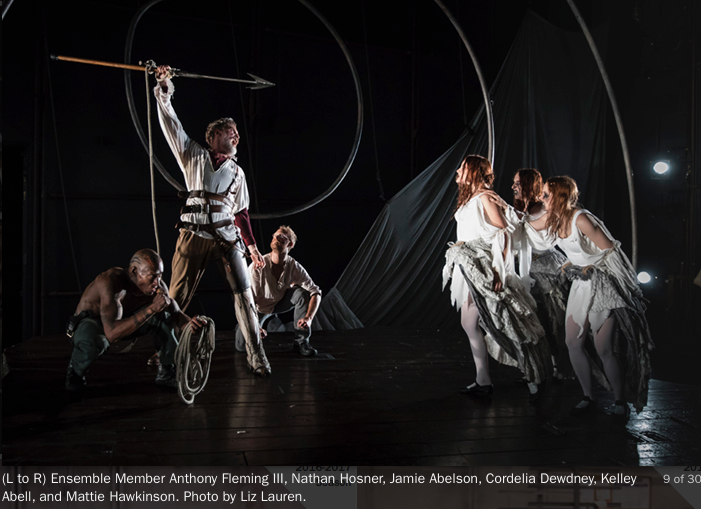 Let’s be direct about it: Lookingglass Theatre’s production of “Moby Dick,” a remount of its world-premiere staging from 2016, is a truly spectacular piece of theater, one that shatters the basic parameters of what is possible on a dramatic stage.

Equal parts musical, drama, and ballet, the production – adapted and directed by Lookingglass ensemble member David Catlin – simultaneously captures the grand adventure, sheer terror, and utter weirdness of Herman Melville’s classic text, one whose narrative has all but entered the collective unconscious: “Ishmael,” as he famously tells us to call him in those legendary opening lines, grows restless with mainstream society and decides to join a whaling expedition, unaware of the fact that when he signs on for a three-year contract aboard the Pequod, he is entrusting his safety to Captain Ahab, a learned, charismatic, and increasingly insane man who is driven to kill the mysterious white whale that took his leg in the previous year’s whaling voyage.

Moby Dick is far from an accessible text; indeed, it was panned by critics when it first appeared in 1851, many of whom harpooned the novel for its slow pacing and extremely precise descriptions of the nuances of sailing. The triumph of Catlin’s adaptation, thus, is how he balances the details of 19th century sea voyaging with the driving force of Melville’s plot. Whether we are following the exhausting process of checking oil barrels for leaks, watching Ahab descend further into murderous madness, or, in a sensationally performed sequence, beholding an impromptu religious ceremony as Ahab christens his harpoon, Lookingglass’ production pulsates with urgency and, remarkably, humor, and it never lets up across the show’s two hours and 45 minutes.

And then there are the show’s two most stunning qualities – it’s acting and choreography. As Ahab, Nathan Hosner is a million miles away from the finance guru he played in Court Theatre’s “The Hard Problem.” His face obscured by a bushy beard and hideous scar, his Ahab is equal parts inspiring and frightening, capable of rousing the crew to action on moment and endangering their lives the next. It is a performance every bit as ferocious as the great whale itself, and his booming voice and quivering eyes dominate the stage – which, of course, does not suggest that the rest of Lookingglass’ cast is not up to par. As Ishmael and Queequeg, Jamie Abelson and Anthony Fleming III make for very appealing “bosom buddies,” and their friendship is a constant source of comedic relief amongst the show’s pitch black darkness. As first mate Starbuck, Kareem Bandealy is wonderful, his earnestness and passion always begging Ahab to stop his fruitless pursuit for vengeance. And as the show’s chorus, Kelly Abell, Mattie Hawkinson, and Cordelia Dewdney are perfection, their beautiful voices harmonizing and choreography drawing out the danger and beauty of the ocean.

But again, that choreography! “Moby Dick” poses an immediate problem in its staging – how to simulate an endless ocean on a static, solid stage. That’s where the true genius of the show comes through. Catlin, along with choreographer Sylvia Hernandez-DiStasi and rigging designer Isaac Schoepp, fashioned a system of ropes, ladders, and pulleys that vault Lookingglass’ actors into the air, raising them 20 feet above the stage. From rowing boats, to climbing the ship’s mast, to sinking overboard, the actors re-create the effects of water and depth in astonishing ways. Fleming and Micah Figueroa are particularly capable, although circus performer Javen Ulambayar performs the most physically daring sequence of the show, an agonizing drowning scene that incorporates multiple actors and jaw-dropping displays of athleticism.

In short, I cannot stop saying good things about Lookingglass’ “Moby Dick,” and from now until September, I will urge everyone I come into contact with to see it.