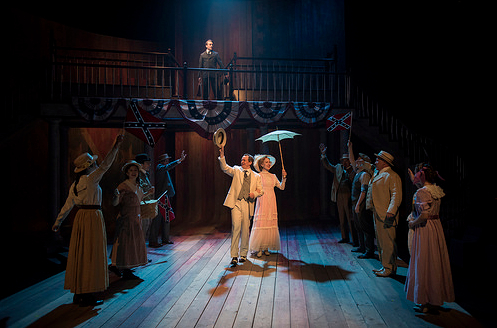 Writers Theatre’s production of the Jason Robert Brown musical “Parade” is the kind of show that makes my heart sink – a technically perfect, ravishingly performed piece of theater that is nonetheless contaminated by its source material, in this case the troubling historical perspective of Brown and book writer Alfred Uhry.

Set in Atlanta in 1913, “Parade” has all the necessary ingredients for a classic musical. Based on the trial of Leo Frank – a Jewish New York transplant who was falsely convicted of murdering a 13-year-old girl, and then lynched by a mob after his death sentence was commuted – the show has a glorious sweep to its stories and songs. Across its two hours and 15 minutes, we watch the transformation of Frank’s marriage from a cold, obligatory partnership to one of deep and lasting love; the town of Atlanta unite against Frank in anti-Semitic zeal, egged on by yellow journalism; the outrageous coercion of witnesses against Frank during his trial; the political establishment’s cowardly embrace of those anti-Semitic elements for electoral gain; and the heartbreaking, violent end for a good, decent, committed man. Within the context of the musical, Frank is a uniquely sympathetic, tragic figure, and Brown’s engaging music, which touches upon folk, gospel, and R&B, bathes the story in wondrous show tune light.

And indeed, no musical could ask for finer artists than the ones behind this production of “Parade.” Michael Mahler’s musical direction is perfect, and Erika Mac’s choreography is lively and engaging. Mara Blumenfeld’s costumes are delicious, Christine Binder’s lighting is stunning, and Scott Davis’ scenic design, with its North/South duality painted upon it, is among the finest I’ve ever seen. And the cast is uniformly stellar: as Frank and his wife Lucille, Patrick Andrews and Brianna Borger are deeply sympathetic, their voices blending beautifully; as Jim Conley, a Black man who was coerced to lie on the stand about Frank, Jonathan Butler-Duplessis oozes charisma; and Jonah D. Winston and Nicole Michelle Haskins (both playing dual roles) are effortlessly engaging.

So on the merits of its songs, performers, and production, “Parade” easily warrants high recommendation, and I’ve no doubt that the show will be a top contender for Jeff awards later this year. Why, then, do I have such reservations for the show? Simply, it’s a matter of the historical record. Make no mistake, what happened to Leo Frank was a tragedy, and “Parade” does a very fine job of capturing the gross injustices that took place. Confrontational art is one of the necessary mechanisms through which change takes place in a democracy, and Brown and Uhry are to be commended for reminding modern audiences of Frank’s story, which is sadly resonant in today’s xenophobic climate.

Yet as bold as Brown and Uhry are in telling Frank’s story, they make a mistake long familiar to observers of art set in early 20th century South – they romanticize the period to an offensive degree, while simultaneously ignoring the caste system that governed the land for 100 years after the Civil War; indeed, Uhry already committed such historical sins with his Pulitzer Prize-winning play “Driving Miss Daisy.”

Such compromises are apparent from the start of “Parade.” The opening song, “The Old Red Hills of Home,” is a soaring, masterful piece of musical theater. A lone Confederate soldier takes the stage, preparing for an impending battle. Halfway through the song, the timeline leaps ahead 40 years, and we see the same soldier, aged and missing a leg, triumphantly marching through the streets of Atlanta, on Confederate Memorial Day, as he is joined by a large crowd of his fellow Southerners, all saluting the sacrifices of the men who died defending Southern honor. The harmonies are spectacular – I’m hearing them in my head now as I write this – and in the multiple productions I’ve seen of “Parade,” it never fails to invigorate the audience.

The problem, alas, is that the number presents a deeply incorrect history of the Civil War. Consider the these lines from the song’s opening measures:

I go to fight for these old hills behind me

These Old Red Hills of Home

I go to fight, for these old hills remind me

Of a way of life that’s pure

Of the truth that must endure

Pray on this day as I journey beyond them

These Old Red Hills of Home

Let all the blood of the North spill upon them

‘Till they’ve paid for what they’ve wrought

Taken back the lies they’ve taught

And there’s peace in Marietta

And we’re safe again in Georgia

In the land where Honor lives and breathes

The Old Red Hills of Home

As an old man, the soldier’s rhetoric is even more sweeping:

We gave our lives for the old hills of Georgia

The Old Red Hills of Home

Not much survives of the old hills of Georgia

But I close my eyes and hear

All the treasures we held dear

The rushing of the Chattahoochee

The rustling in the wind

And Mama in the kitchen singin’

And me and Lila swinging in a tree

These sentiments – of the South fighting for its homeland, of the North aggressively attacking the “pure” Southern way of life, of an idyllic, Antebellum South with such “treasures” as delicate breezes, homemade biscuits, and pure streams – all are miraculous manifestations of the Dunning School, a line of historical thinking named after William Archibald Dunning. A Columbia University professor in the early 20th century, Dunning successfully rebranded the Civil War not as a battle over slavery, but as one of Southern honor featuring civilized gentleman, not slaveholders.

To say the historical record refutes that premise is an understatement. Consider this March 21, 1861 speech from Alexander H. Stephens, explaining the South’s reasons for seceding:

The prevailing ideas entertained by him and most of the leading statesmen at the time of the formation of the old constitution, were that the enslavement of the African was in violation of the laws of nature; that it was wrong in principle, socially, morally, and politically. It was an evil they knew not well how to deal with, but the general opinion of the men of that day was that, somehow or other in the order of Providence, the institution would be evanescent and pass away.

Our new government is founded upon exactly the opposite idea; its foundations are laid, its corner- stone rests, upon the great truth that the negro is not equal to the white man; that slavery subordination to the superior race is his natural and normal condition. This, our new government, is the first, in the history of the world, based upon this great physical, philosophical, and moral truth.

Stephens is not exactly a household name in 21st century America, but few figures were more foundational to the Confederacy: a representative in the U.S. House for decades, he was the vice president of the Confederate States, and after the Civil War, he returned to the House, and was later elected governor to – you guessed it – the state of Georgia, the same state he represented for decades and the same state where he made that speech in 1861.

So yes, Southern honor and the Southern way of life were both at stake in the Civil War – that way of life, however, involved the enslaving, torture, and rape of four million people, who as property constituted nearly 20 percent of all wealth in the U.S. And although it may appear that I am taking the opening song of “Parade” and spinning wildly from that point, consider this – at the musical’s close, Frank’s widow announces that she intends to stay in Atlanta. “I’m a Southern girl,” she says, before proudly joining the ensemble in a reprise of “The Old Red Hills of Home.” This is not a commentary on the Southern way, but an embrace. There may be some ugliness, but they still have their pride.

Such are the racial compromises that course through “Parade,” and they are visible in many other moments. Take, for instance, the character of Thomas E. Watson, a similarly unknown (but similarly influential) figure in Southern politics. A leader of the Populist Party, Watson was elected to the House in 1890, and he pursued a rigorous policy of racial and economic equality that united poor whites and poor African Americans. When his political fortunes soured, however, Watson relaunched his political career with an anti-Catholic, anti-immigrant, virulently racist stance, and his electoral fortunes soared. Through his publications Watson’s Magazine and The Jeffersonian, he wielded enormous influence in Georgian political life, and his rebirth reached its apex in 1921, when he – the Populist who received just 29,100 votes when he ran for president in 1908 – was elected to the U.S. Senate.

None of those details come through, though, in “Parade,” where Watson is reduced to a rabble rousing anti-Semite. Although well played by the talented Jeff Parker, the Watson of “Parade” is a villain through and through, and Brown and Uhry miss the chance to use the character as a uniquely perfect commentary on American politics. They make gestures toward that point – District Attorney Hugh Dorsey (well played by Kevin Gudahl), who prosecuted Frank, used his renown for a successful bid for Georgia governor – but it misses the larger scope of the era.

There is one song in “Parade” that touches on the time’s racial divide. Titled “Rumblin’ and Rollin’,” the song features two Black house servants mocking the furor over the Frank trial, and (correctly) pointing out that none of the Northern governors protesting Frank’s trial seem all too concerned about Southern lynchings and the brutalities of segregation. It’s a fun song (performed with gusto by Winston and Haskins), but as the only time the show steps outside its historical gaze, it feels like a throwaway – especially considering that Frank’s trial strategy, which saw his defense team make blatantly racist gestures to the audience (how could Frank commit this murder when Black people are so much more violent?), is never touched upon in the musical.

I realize I’m among a very small minority in bringing up these points, and indeed, the performance of “Parade” I saw was rightfully rewarded with standing ovations at its conclusion, ovations that will likely continue through its run; however, as the novelist William Faulkner (himself a Southerner whose fiction made racial compromises) wrote in 1951, “The past is never dead. It’s not even past.” And we need to think deeply about how that past is reflected in our art.