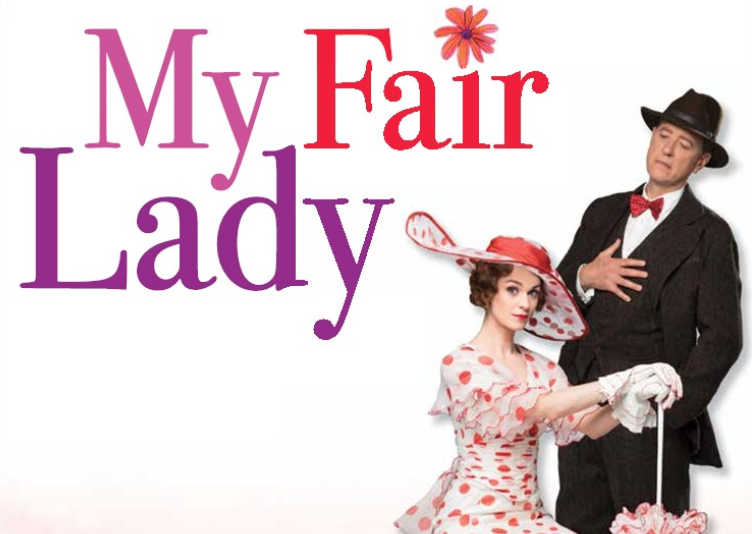 Alan Jay Lerner and Frederick Loewe’s musical “My Fair Lady” is among the most beloved of the classic musicals, with multiple Broadway stagings and a film – starring Rex Harrison and Audrey Hepburn, and directed by George Cukor, no less – to its credit. Therefore, it’s hardly surprising that the Lyric Opera chose the musical as its latest exploration of the popular American songbook, and I am most delighted to report that “My Fair Lady” continues the opera house’s winning streak.

Closely based on the George Bernard Shaw play “Pygmalion” (indeed, much of the musical’s book is lifted straight from Shaw’s pen), “My Fair Lady” concerns the unlikely social rise of Eliza Doolittle, a Cockney flower girl living in the margins of 1950s London. After an unlikely meeting outside the Royal Opera House with Henry Higgins – an outrageously condescending (but admittedly talented) professor of phonetics – Eliza becomes the subject of a wager between Higgins and Colonel Pickering, a fellow phoneticist. The wager: That using his ingenious methods of speech coaching, Higgins can transform Eliza from a “draggle-tailed guttersnipe” into a lady, one of such refinement and sophistication that she would be confused for a duchess.

What commences is pure 1950s musical heaven, with witty (and at times barbaric) repartee, sweeping character development, and a hell of a lot of wonderful songs from Lerner and Loewe, chief among them “Wouldn’t it be Loverly?”, “I Could Have Danced All Night,” “On the Street Where You Live,” and my personal favorite, “A Hymn to Him.”

Such fine source material, though, would not soar without the right cast and production, and the Lyric’s elegant touch elevates “My Fair Lady” just as it did for “The Sound of Music” and “Carousel.” Tim Hatley’s sets fill the Lyric’s performing space with a modern, sophisticated air; Anthony Powell’s costumes are spot on; and the orchestra, with conductor David Chase at the helm, is sharp and focused.

And driving the material forward is the cast of “My Fair Lady,” which lends its own stamp to the show’s familiar material. As Eliza, Lisa O’Hare is an absolute charmer, bringing ballerina-like grace and impeccable comedic timing to the roll; and as Henry Higgins, Richard E. Grant (who will be familiar to many patrons for his work in “Gosford Park,” “LA Story,” “The Player,” and other films) is an energetic, deliciously ostentatious fellow, wrapping himself around Lerner’s lyrics with unrestrained glee. Another standout is Bryce Pinkham, who’s soaring tenor and natural stage presence makes him a perfectly memorable Freddy Eynsford-Hill (a suitor of the reformed, elegant Eliza).

Some have criticized the Lyric’s musical treatments in the past, and indeed, some of those same criticisms have fallen on this production of “My Fair Lady” – that the performing space is not adequate to the needs of an American musical, that the productions uncomfortably combine operatic/musical elements, etc. And it is true that seeing a musical at the Lyric is a profoundly different experience than seeing it at, say, The Goodman, or even Theater Wit or Stage 773, but given the caliber of talent behind this production, the end result more than speaks for itself.