It’s Only A Rock ‘n Roll Exhibit, But I Like It: The Rolling Stones Exhibitionism Hits Chicago 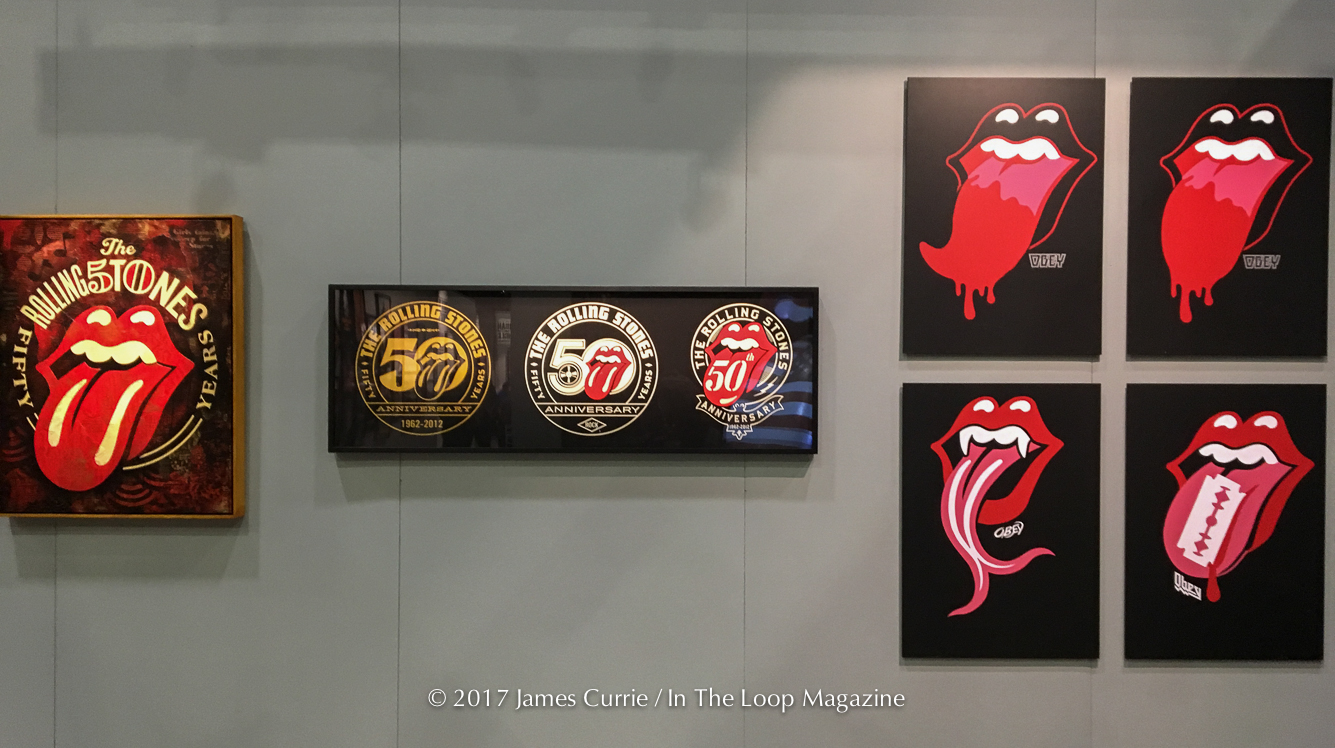 Traveling rock band road exhibits seem to be a hot trend as of late. A couple years back we saw the David Bowie Is… exhibit come through town with great fanfare and now we get The Rolling Stones Exhibitionism exhibit at Navy Pier. This marks a growing trend in pop culture and music as the two collide on the beaches of Lake Michigan, rocking the pier as only the Stones can.

I’ve experienced several of these traveling, residency style rock n roll exhibits in my day as well as those home base ones like Graceland, Sun Studios, Chess Records and The Allman Bros. Big House to name a few. It started back in the mid 90’s when KISS did the KISS Konvensions. Others have been The Beatles, Alice Cooper and even the Monkees. All with the same direction and path to fandom with nostalgic items and trinkets like costumes worn on tours, hand written pages from lyric sheets and behind the scenes making of interactive displays. Each giving their own take and personal spin on musical legends. The Rolling Stones Exhibitionism follows suit.

As if washed ashore from London, the Stones exhibit tumbles down the family fun compounds of Navy Pier. The recently revamped venue and hall serve as a vast layout for the bad boys of London. Exhibitionism is located at the far end of the pier on the second floor overlooking the muddy waters of the lake and giving a back view to our amazing skyline. No Bridges To Babylon needed to get here. Just be prepared to pay as much as a ticket price to park – $28 yikes!

When you first enter, you are offered a set of headphones and mini tablet that’s synced to the walkthrough of the exhibit. A Bigger Bang for the experience. Upon starting it, you’ll hear the background and details on each scene, main props and displays as well as tales from the boys themselves. I highly recommend picking one of these up. You’ll not only miss some important details of the tour, but also miss out on hearing from Mick, Keith and Charlie on their life’s adventures.

The first gallery space we enter is deep red. Like the iconic logo lips. A wall that states, “Ladies and Gentleman” in large, back- lit block letters surrounded by projections on the side walls outlining the band’s timeline.

Behind that, we enter an open ceiling spaced lined with an assembly of TV monitors playing an array of video clips, stills, movies, interviews, commercials and more.

Next, we round a corner that takes you through a mock set up of the Stones old apartment life they lived back at the start in London. They (Jagger, Jones and Richards) lovingly refer to this decrepit old flat as, “a beautiful dump”. It’s pretty bad and I’ve lived in more dumpy college apartments from coast to coast than most. This one would definitely leave you with at least Sticky Fingers.

After that, we exit into the band’s recording studio. Here, we find Charlie Watt’s 1965 Ludwig Sky Blue Pearl drums. A kit he used most from 1965 to 1968. A placard near the base states, “Everyone in the early ‘60s wanted Ludwig, so I got mine from the same place Ringo got his, I think, which was Drum City, in Shaftebury Ave. Ringo’s was dark grey pearl and mine was sky blue – very camp.” (UK slang, Camp = The art of acting or portraying something or someone as gay, without having a sexual preference for the same gender.)

Other items in this room included a re-creation of the band’s studio from the late 1960’s era complete with tablas, guitars, studio walls, piano and lyric sheets on a music stand. The back walls illuminated with videos of the band playing in the studio and recording. You’ll also see recording equipment, amps, gear, reel to reel tape and more. Another adjoining section followed was filled with more personal books, journals and sheet music.

A highlight to many musicians donned the next halls walls. Display case after display case filled with guitars, harmonicas, lyric sheets and the likes encompassed the room. You’ll see the collection of guitars that made such iconic recordings as “Their Satanic Majesties Request”, “Beggars Banquet”, “Let It Bleed” and more. One whole case filled with Jagger and Jones’ harps.

Next we come across artwork. Original album artwork, tour posters, dioramas more lyrics and sheet music and paper trinkets and rounding out of that hall brings us to a video room. Here, you can watch, what else, videos of the band. A select highlight reel.

After you get your fill of video clips, you leave the room to enter into a hall lined with Andy Warhol artwork. Original masterpieces created for the band, mainly Mick, by the New York artist in his prime.

We’re almost through it all now, more than half way done. The next great hall is filled with the band’s iconic clothing. Suits, jackets, hats, platform shoes, feather boas and leather clad pieces covering 40 years of the band’s look and brand. From the Piccadilly circus styles of the mid 60’s through the wild feather lined jackets and devil horns Jagger wore to strut down countless stages.

The final display room is somewhat of a surprise. The venue asking us to keep it on the down low but basically, it’s a trip backstage. To experience what it’s like during a Rolling Stones concert.

Just before you leave the exhibit, you’re treated to a 3D concert from the Rolling Stones live. Fully immersing yourself into a concert with banging sound and amazing Real-D 3D glasses and video experience. A first of it’s kind for the Stones.

Of course you can’t get away from any exhibit without a trip through a gift shop, this one is no different. Once you leave the final room, you enter right into the Rolling Stones Exhibitionism shop. It’s filled with everything you’d expect like t-shirts, mugs, buttons, posters, souvenir post cards and books, but you’ll also find a few unique items like $400 Rolling Stones edition headphones, (some girls) might find the bathing suits a sweet buy at $250, $400 umbrellas, wallets and yes “Iconic lips” Pez dispensers for a mere $8.

The whole experience should take you about an hour to get through. After everything you see, hear and experience, you might need an Emotional Rescue. A couple of lovely ladies leaving the exhibit the same time I did were all a gush about it. They explained to me how seeing the Stones live is an experience itself and this exhibit gave them the same feeling, Satisfaction.

This is something every Stones fan will want to experience. Even if you aren’t the biggest fan, it’s still pretty entertaining. Lots of history. A good design and layout. A true rock n roll adventure. It would have been nice to see more set pieces, concert props, personal items and Brian Jones things, but otherwise a solid experience.

The Rolling Stones Exhibitionism opens to the public on Saturday April 15th and runs through July 30, 2017. It’s located at Navy Pier in Festival Hall B.

Side note: Downstairs below Exhibitionism, is a tie to the British band. A small gallery of a man whose been documenting the Stones on film since the 1970’s, Paul Natkin. His photographs line the hallway in one section of the South East wing. You’ll see some iconic images tucked away behind a red roped VIP section. A video interview of Natkin plays on another wall in front of a group of benches as he talks about his connection with the Rolling Stones. Make sure you stop off here a take a look. This man is a local Chicago legend in the world of photography. Cost = Free.

For more on the Rolling Stones Exhibitionism in Chicago including tickets and event times, click here

For photos from the exhibit in Chicago, click here