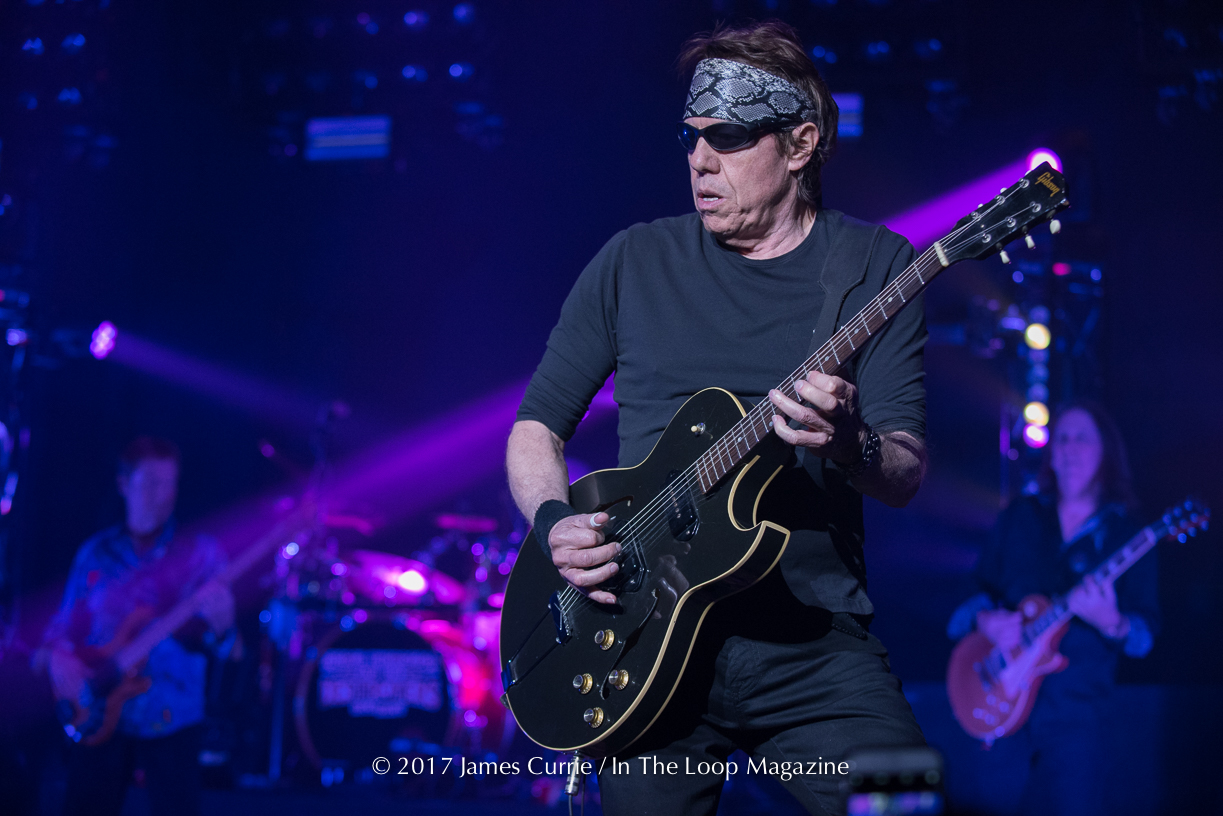 The guitar slinging, finger plucking, six string slide genius known as George Thorogood brought down opening night of his two night stay in St. Charles, IL at the Arcada Theatre. He, along with his Destroyers, played through the classic rock boogie driven tunes with fervor. They paid tribute to fallen rockers and lost legends in their profession and brought his brand of humor to encompass it all into a tight hour and a half package of rock and respect. All this on just the first night.

We all know George Thorogood and the Destroyers as that bar rocking, blues boogie belting power house from Delaware. The band that defines badass biker tunes, bar brawls in movies and summertime fair ground love. Thorogood’s sound is unmistakable. His brand stems from his love of rock n roll. His trademark look of perfectly quaffed hair, wrap around black sunglasses, black t-shirt, black jeans and a touch of rattlesnake hide. His sound, from his black (Blacktooth) or white (White Fang) Gibson ES-125 electric hollow bodies and that unmistakable whiskey soaked voice. It all still stands the test of time as great rock n roll should.

On this night, we get a mix of classic Thorogood hits as well as his own favorites in the form of cover tunes. The show opens with his drummer, Jeff Simon’s drums cross lit with blue spot lights center stage as Barry McGuire’s track, “Eve of Destruction” belts out through the PA system. This lead into “Rock Party” then “Who Do You Love?” After which, the band takes their first mini break.

Thorogood takes a pause and address the audience for the first time saying, “The hassles are over and welcome to the Tuesday night rock party ladies and gentlemen here at the beautiful Arcada Theatre.” He continues on with, “I’m sure that everyone’s got the news (pauses in emotion) but you know… Chuck Berry is not dead. He did not die! He’s just got no particular place to go.” Then the band rips into Berry’s, “No particular Place To Go”.

(For a clip of that song in the performance, click here)

As the night progressed, George Thorogood and the Destroyers continued to rock and entertain as only they know how. The hits continued, the audience interactions grew. Thorogood’s a bad ass through and through, but has a comical side too. Expressing his adoration of himself and knowing just how good he really is. There was someone in the front row that seemed to capture Thorgood’s eye as he kept coming back to a lovely young woman dancing and signing along with every track. A playful flirting as Thorogood not only does with with his female fans, but his guitars. He handles his hollow body beauties like a true romancer, fondling them, caressing them and even waggling his tongue like a snake charmer and licking them.

During the song, “One Burbon, One Scotch, One Beer”, he breaks the song down into segments. Talking to the crowd and mentions St. Charles by name (not Chicago) as being a true hidden gem. This of course makes the house go even wilder as they take great pride in being from St. Charles and NOT Chicago out there.

More hits were played as well as more covers. During another break, Thorogood made a dedication to another one of his idols. “I’d like to dedicate this next one to a great American, Mr. Johnny Cash.” Thorogood exclaimed and then tore into the Cash classic, “Cocaine Blues” During a guitar solo in the song, Thorogood pointed to his guitarist, Jim Suhler, and said, “Come on now, make a Texas boy feel good!” guiding the audience over to witness and appreciate his lead guitar soloing efforts. After they finished, he shouted, “They don’t make em like that anymore do they!?”

Other tributes where made throughout the show that included other Chuck Berry songs and The Rolling Stones. They played “Get A Hair Cut” and after he said, “How does it feel to be seventeen years old again!” Reminding folks to take life easy and remember the good ‘ol carefree days.

Thorogood smiled from ear to ear throughout much of the show. You could tell he was was truly happy to be there. The audience was strong and gave the positive feedback every rocker craves. He rewarded them again saying, “I just want to say thanks to all my loyal Illinois fans… and Chess Records.” Then raged into “Bad To The Bone”.

They ended the regular set with the fan favorite, “Move It On Over”. It was 10PM on the dot. They left the stage but returned quickly to say, “We talked to the house backstage and they said the curfew has been lifted! It’s rock n roll national anthem audience participation time. This is Rock n Roll! Are you with me!?” George Thorogood and the Destroyers jumped right into an 8 minute rendition of “Johnny B. Goode” while getting the audience to sing along with the chorus and dance in their seats.

The night ended with the light show going dark and the band walking off stage. The national anthem plays through the PA and the band walks back out. This time silent holding square white poster cards that spelled out the name, “C H U C K”. “Rock and Roll Music” follows them off one last time. This was the end of night one. Get ready for night two St. Charles. If it’s anything like tonight, you’ll be in for a real rock n roll treat.

For more on George Thorogood and the Destroyers including current tour, click here

For photo’s from the Arcada Theatre show in St. Charles, click here

Setlist for George Thorgood and the Destroyers at the Arcada Theatre in St. Charles, IL March 21, 2017

George Thorogood and the Destroyers @ Arcada Theatre (St. Charles, IL) Lollapalooza Announce 2017 Lineup And Returns Even Greater Than Before