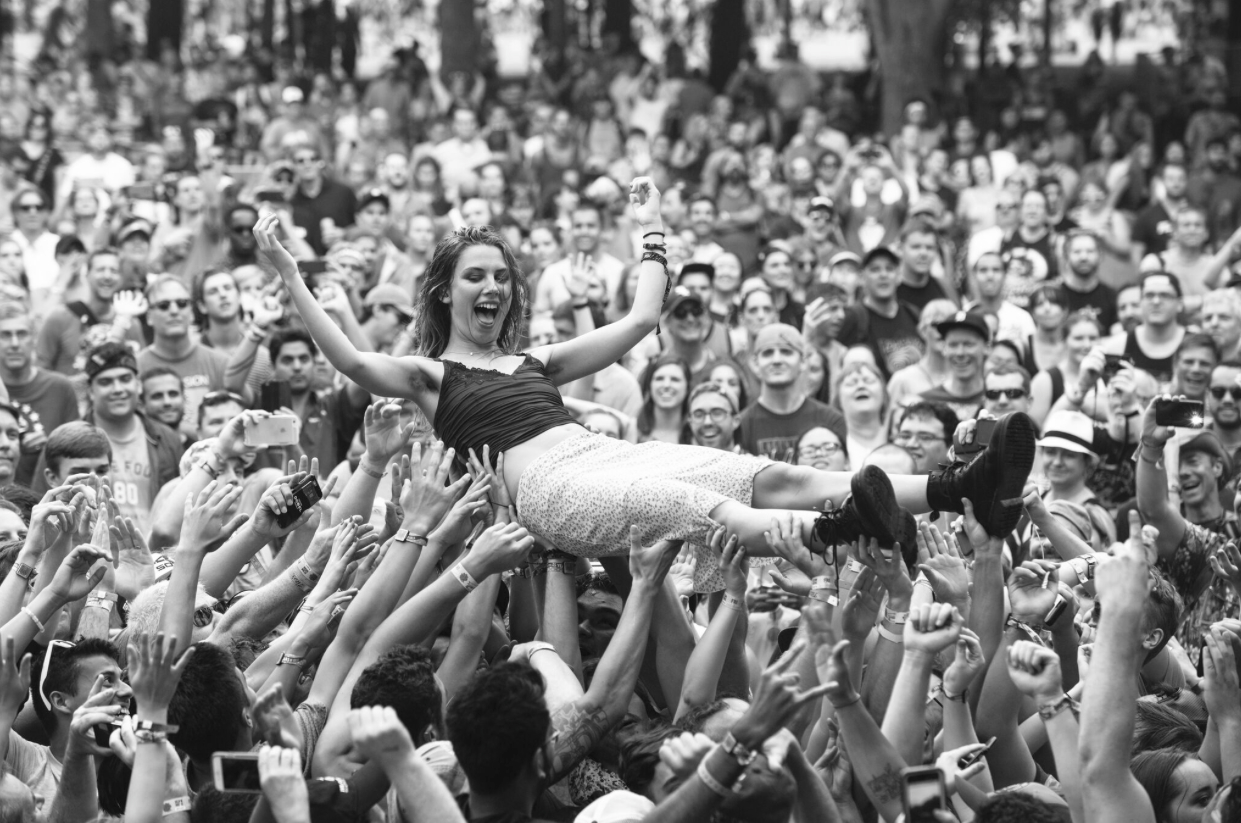 The Joy Formidable– After seeing Potty Mouth, a girl punk outfit from Boston, rock the BMI stage, I walked into Joy Formidable fumbling an attempt to play “Passerby” on the Bud Light Stage. Front woman Ritzy Bryan embraced the moment of imperfection to say “fuck them USBs”, calling out other artists that establish perfection before they even walk on stage. When they launched into the song afterwards, they created a powerful wave of distorted rock madness that proved their point well— it was hard to believe it was created by only three musicians and destroyed any track played through a laptop.

The Joy Formidable rocked out harder than any band I’ve seen so far this weekend— their energy and madness consumed you. The noise interlude resurrected from their final track “Whirring” felt like a shoegaze dream as Bryan and bassist Rhydian Dafydd rapidly strummed their instruments over a calming keyboard track. They also showed the madness behind these jams with their stage presence. At one point, Bryan knocked down a stack of her amps while performing one of these jams and looked like a complete badass in doing so. Sometimes, that’s the result when rock and roll takes control, and The Joy Formidable embraces that.

Leon Bridges– Leon Bridges is commonly compared to the modern day Sam Cooke and was really the only artist of his kind at Lollapalooza on Saturday, if not the whole weekend. His set, which was composed of many songs from his debut, Coming Home, are swift and never attempt to overwhelm your ears— Bridges aims to swing with his audience about his feelings of love and life to make them feel cool and collected. It’s a reflection of R&B music that can sometimes feel lost in the past, but the young soul singer brings it back home as if its never been lost.

Bridges did find one way to way to surprise the Lolla audience with a sexy and groovy cover of Genuine’s “Pony”. His band surpassed the beat’s easily recognizable vocal sample and laid down smooth jamming for him to sing over— you could only recognize the song before the chorus if you caught on to the bass line. In a land where sex and lust crawl through many artists tracks, Bridges made such topics a beautiful subtlety during his Saturday afternoon set.

Jane’s Addiction– Given that this year rings in Lollapalooza 25th anniversary, it was necessary to see the band that started it all, Jane’s Addiction, rock out and reintroduce its roots to a modern day audience. They did so by playing Ritual De Lo Habitual, which is also celebrating its 25th anniversary this year, in its entirety. The album is loaded with hits and felt perfect for a live atmosphere. The band’s performance was tight and exciting, especially Dave Navarro’s exploratory guitar work. Perry Farrell can still hit his notes too, but it was hard to dictate any of the lyrics he sang. Considering how high his vocal range is, I think we can cut him some slack, though.

After running through the album, the band brought out a few guests to help them celebrate. Tom Morello of Rage Against the Machine, who played a legendary set at the festival in 2008, scratched his way through a crazy guitar solo during “The Mountain” and smiled as he strummed along with Navarro. To conclude the set, The Smashing Pumpkins’ Jimmy Chamberlin, who has a history with the festival’s touring days, joined the band to close their set with “Jane Says”.

One of the most awe-striking aspect of the performance was the explicit sexual air created by the band’s three dancers, one them including Farrell’s wife Ettzy Lau. The women straddled a 4×4, square-piped apparatus and danced to heightened the lustrous energy behind Jane’s definition of rock and roll. Lau performed as the face of the dancers and, at one point, made that known when she straddled and grinded her husband in the middle of the set. At one point, jaws dropped when one of the dancers undressed Lau and covered her with a sexy red lingerie, which the only strip tease I’ve ever seen during a rock show. Bravo, Jane’s Addiction.

Grimes– Grimes is the perfect bridge between the indie and EDM acts at Lollapalooza this year. During most of her set at the Lakeshore stage on Saturday night, bass tones boomed over the sound system, resulting in one of the rowdiest crowds I’ve seen all weekend. She whipped out her controversial-but-amazing “Go”, which is stacked with EDM wonder, “Oblivion” and “Be a Body” from  Oblivions, and a number of selections from her latest album, Art Angels. Front woman Claire Boucher’s vocals mixed up the vibe of the electronic bangers with her sugary, high-pitched vocals and powerful screaming, making her audience think about the diversity of the performance. Even Grimes could fit on Perry’s stage given her electronic background, Boucher’s perspective on music is something that will make you dance, feel uncomfortable, reinterpret your perspective of her, and then dance again.

Grimes’ way of soothing the crowd after a series of bangers was probably one most people didn’t recognize, but it was beautifully ethereal, nonetheless. While she caught her breathe, a cover of Franz Schubert entered the atmosphere, which was built by subtle synth tones and multiple layers of sustained vocals. It brought some peace into the air that helped end her set with a smile.

Red Hot Chili Peppers– The Red Hot Chili Peppers are always a convenient headliner choice at Lollapalooza, given its history of alternative rock lineups since its spawning. But since the festival has found it’s home in Chicago, many mixed opinions arise when their name appears on the festival lineup’s first line. At their first headlining performance in 2005, the band played with its most celebrated lineup, which included original guitarist John Frusciante, and was supporting Stadium Arcadium, an album loaded with many of their most successful singles; one could say that RHCP were at their peak. But that was over 10 years ago, so what could they possibly do now to live up to the responsibility of headlining Lolla?

Their 2016 performance would be their second in five years without Frusciante and with replacement guitarist Josh Klinghoffer. When the band first toured with this lineup, it felt like one centered on its greatest hits, but this time around, it’s obvious Klinghoffer has brought out the punkier sides of Anthony Keidis, Flea, and Chad Smith, resulting in a headlining performance worth celebrating on Saturday night.

The jams tucked into their set are reminiscent of their Mother’s Milk era, which were continuously high-energy and funky and added exciting context to the series of hits and new material. “Dark Necessities” and “Goodbye Angels”, both songs from great new album The Getaway, are built by groovy riffs that mesh perfectly with their past material and never felt awkward. They even whipped out some rarities like “Blood Sugar Sex Magick”, bringing their funkiest side to the front of the mix. Most importantly, everyone on stage was all smiles as they cruised through their set on the Samsung Stage, proving the Chili Peppers are invigorated with new life and plan to add to their legacy with more excitement to come.

Kidzapalooza! Where The Little Ones Gather To Rock Out At Lollapalooza Lollapalooza 2016 Aftershow Review, GRiZ At The Mid