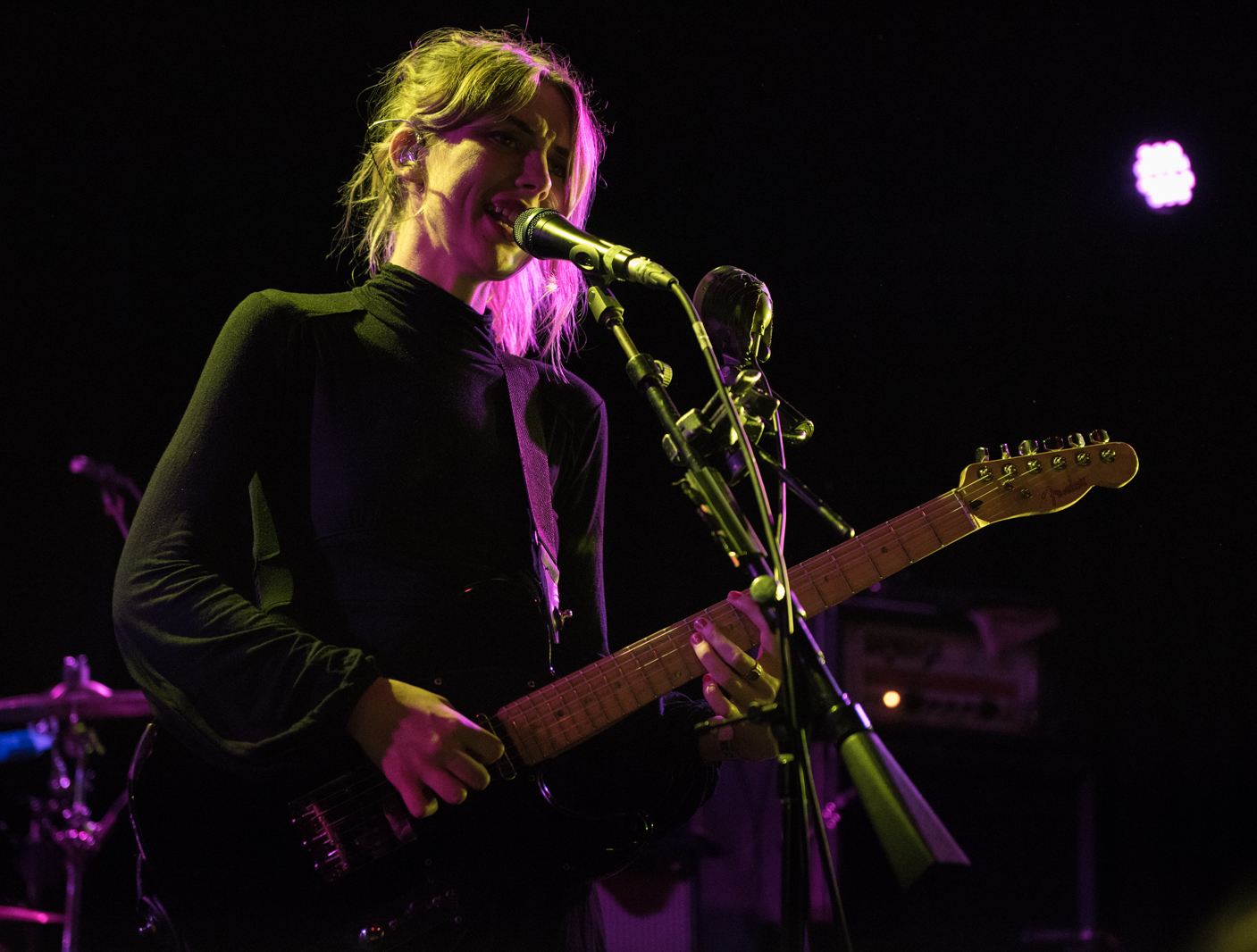 London based, Wolf Alice, played a sold out show at Lincoln Hall tonight in front of a crowd of VERY enthusiastic fans. Though a fairly new band to the music world, they already have quite the following, and it’s gaining steam in part to several appearances on late night TV on shows like Conan O’Brien and James Cordon. They’re even getting mainstream radio play with the most recent hit, “Moaning Lisa Smile”. Tonight, their second return to Chicago in the same year, proves even more how they’ve grown, starting with a larger venue – with a sold out show.

First, here’s a little info and background on the band. Wolf Alice are a four piece indie rock band from North London, UK. They originally formed in 2010 as a folky-pop band, but soon added new members and made a few changes that created a new sound. Their sound is varied, but mainly rooted in the alternative rock vein. Their style has been described as folky grunge. You can definitely sense a 90’s altern-pop feel about them. Think Hole and early Smashing Pumpkins with a tinge of Alice in Chains. They have two EP’s and one studio album just released this summer.

The first time the band toured through Chicago was less than a half a year ago. Wolf Alice played Subterranean in Wicker Park in March. Oh what a difference a half a year makes. That show at Sub T (which only cost about $12.00 to see) was not sold out. The band was still working the touring the states kinks out and traveling in a van. This time around, they were back, playing a much larger venue and now touring in style in a large tour bus. A pretty amazing feat for any band to do.

Wolf Alice took the stage after “Made Violent” and “Drenge” opened the night. When the smoke finally cleared from Drenge, we see Ellie Rowsell, Joel Amey, Joff Oddie and Theo Ellis take the stage and proceed to rock the house.

It was a dimly lit set with lots of blue, red and strobe lights. (No smoke machines here). They started their set off with the mid tempo track, “Your Love’s Whore” from their latest and first full length release album, “My Love Is Cool”. They followed that with a mix of tracks from their first couple EP’s and more from the new album.

They interact and banter with the audience.  They jump in the crowd.  A crowd of young women came be seen surrounding the stage around Joff and Theo with Cheshire Cat smiles.  Ellie timidly commands the stage, while Joel keeps the beat going on and on.

They ended with the big rockin’ track, “Giant Peach”, one that really got people jumping, but that wasn’t it. They soon came back to an encore that included the ballad, “Turn To Dust”, “Blush” and their monster hit, “Moaning Lisa Smile”.

After the band crushed out 16 songs, they retreated backstage and left the audience wanting more. We’ll they obliged, but in a different way. They came out and meet with the fans.

I had a chance to talked to them about their tour through the US, being in Chicago and what do they do for fun on the road.

Guitarist Joff Oddie, who kindly admired my beard,  said, “They are glad to be back in Chicago again and it’s a little better this time.” He went on to say, “The first time we came through we played at this small club called Subterranean. It was our first time on a big tour though the States. It wasn’t as nice as this time. Now were traveling in a large posh tour bus. Last time was in a van. That was no fun.” I asked what they like to do in the new digs. Oddie said, “It’s really great. We can actually sleep comfortably and play games and watch movies. Not bad at all.”

Oddie also talked about how, “absolutely huge America was” and how “riding in this bus was going to make it easier.” The next stop on the tour was 2 days away. He said he was looking forward to sleeping and watching movies in comfort.

For tonight’s show, there was a special limited edition poster made. But much to their surprise, we’re not aware of it. Oddie and Ellis were all a little shocked and questioned each other about where did it come from? They really liked it, but wanted to know how did it come to be? The tour manager walked by and they asked him. He said, “Yeah, we know about it. It was a last minute deal”. It’s all good.” So everything was OK after all. We (the fans) got an cool piece of artwork to commemorate the night and they gained even more loyal fans.

Joel Amey, the drummer for Wolf Alice said he was, “happy to play here (Lincoln Hall / Chicago) but that he was, “tired and ready to relax on the bus”.

Front woman, Ellie Rowsell was quite for the most part. She seemed to distance herself slightly as opposed to the others, but said she was happy to be in Chicago as well. She signed items for fans and took pictures before retreating to the bus.

Theo Ellis, the bands bass player was last out. He appears to be the wild one of the bunch and a crowd favorite as they cheered for him as he walked out. He was the most shocked to see the special edition poster. He stared at it with conviction and questioned the couple who brought it up to get signed. At one point he leaned over to Oddie and asked, “Did you see this?! Do you know anything about it?” To which Oddie replied, “Ya, it’s cool. Apparently it’s all worked out.”

There are reasons why a band “makes it” today. Wolf Alice is a prime example of how it works.  First and foremost you have to make great music, but that’s not enough. Yes, marketing and promotions are a big part, but you need to connect with the fans. That means constant touring, especially at the beginning, lots of fan interactions that include social media outlets and in person are all needed.  Wolf Alice are it right now and destine to be much greater.

You can still catch Wolf Alice on the road this year.  Their next stop is in Austin, TX to play the ACL Festival before wrapping up the US leg of the tour in Dallas on October 18th. If they come through your town and you get a chance to see them, do it -but good luck. Most of the remaining US dates are sold out.

For more information on Wolf Alice, the tour, the album etc., click here.

For photos from the show at Lincoln Hall, click here.

For videos from the show at Lincoln Hall, click here.