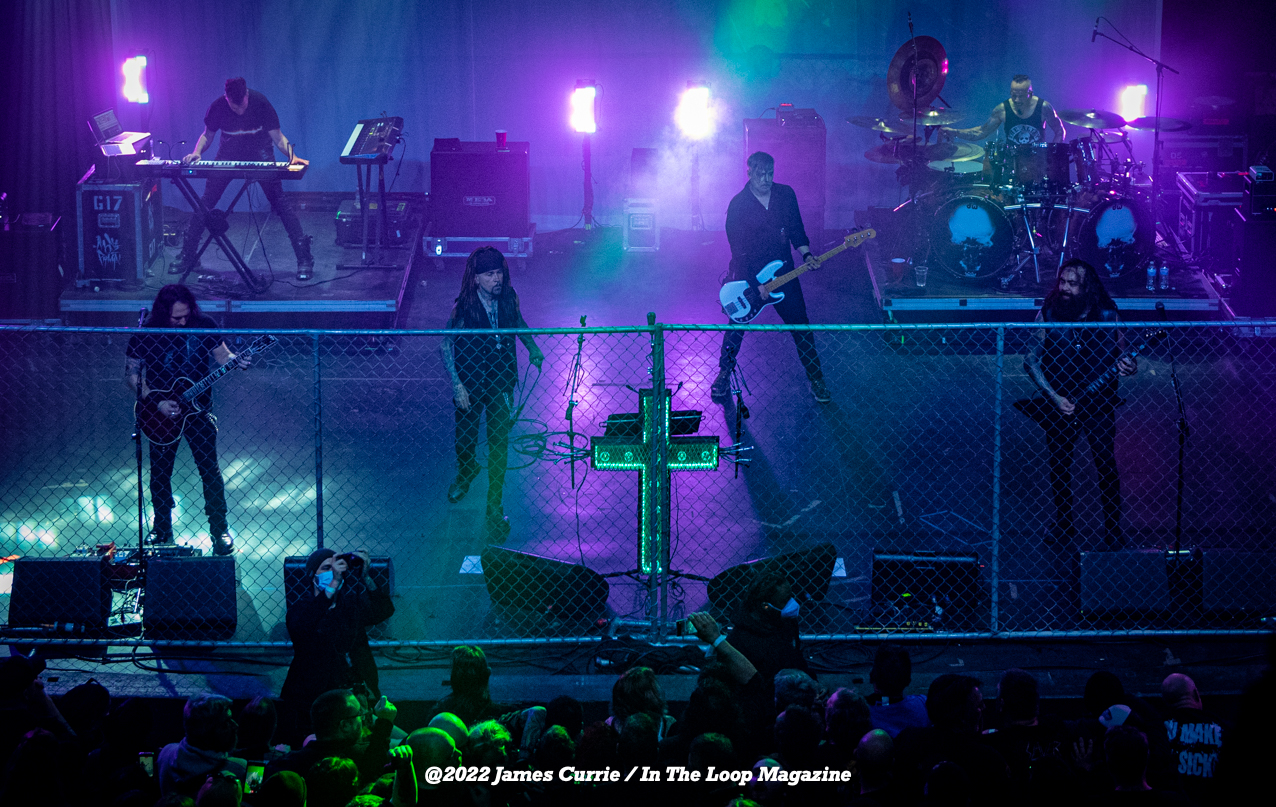 It’s no secret it’s been a rough road for live music these past couple years. COVID-19 delayed, cancelled and postponed nearly every tour set in place since early 2020. Ministry was not immune to the delay as they’ve been restructuring the much touted and anticipated tour, Industrial Strength Tour. Originally, it was billed with Industrial bands KMFDM and Front Line Assembly but after several starts and stops reformed into another version that is admittedly more hard rock and metal than industrial with acts, Corrosion of Conformity and Melvins, but none the less, sold out The Riviera Theatre.

Many wondered how the turn out would be as several online chats sparked negative feedback with the new lineup changes. Those concerns were soon addressed as the night progressed and the house filled to capacity. The line to get in began well before the show’s 7PM start time and fans continued to roll in throughout the night. By the time Ministry took the stage, it was elbow to elbow.

North Carolina’s Corrosion of Conformity kicked off the night. A band that’s been around nearly as long as Ministry as Woody Weatherman leads the band into its 40th year in 2022. Fronted by Pepper Keenan for most of that time, the sludge metal band got the house primed with tracks spanning their 4 decade career ending with the fan favorite, “Clean My Wounds”.

Up next was Seattle area stoner doom rock band, Melvins. Another legacy group that has influenced a generation of bands from the Washington state area for 30+ years. Bands like Nirvana, Soundgarden and even Tool have sited Buzz Osbourne’s band as inspiration for their existence. And there’s good reason, they have created a new sound that resonated with so many creating a sub genre of rock that still runs deep today. Osbourne, McDonald and long time drummer Dale Crover opened their set off with the theme song from ‘Sanford and Son’ then right into “The Kicking Machine”. They played through a dozen songs ending with the droning feedback driven track, “The Bit”.

The stage was cleared and roadies brought out “the fence”. A visual reference and throw back to Ministry’s “In Case You Didn’t Feel Like Showing Up Live” video and “The Mind Tour / The Mind Is A Terrible Thing To Taste” Tour from 1989/1990 where the band was closed off with chain link fence as they climbed around it like spider monkeys at the zoo and fans bashed bottles and cans into it like a segment from The Blues Brothers chicken wire cage scene. This was supposed to be the anniversary for that legendary tour. Initially, this didn’t seem like it would work and seemed more of a gimmick, but once the show progressed, along with the video backdrops and song selections, we soon seen what Jourgensen had in mind and it worked.

Ministry broke out some deep cuts and classic tracks spanning nearly the bands 4 decades of music history (sorry With Sympathy & Twitch)  capped off with an encore featuring songs only from their latest album, ‘Moral Hygiene’. As someone who’s seen Ministry many, many times in his life, I’ll say this show was different. The classic tracks had a renewed feel and sound and worked really well. From the audience reaction, I think we can all agree as a collective, this was a good combination.

So what made these songs sound different? There seems to be several factors for this. One being the forced time off due to the pandemic. For a long time, at least a year, the band didn’t get together and play. No rehearsals. No gigs. Just time to work on things at their own pace. A time to refocus and Jourgensen himself seems to have just done that, refocused and refreshed. Another reason was Jourgensen recent move and the redesigning of his home studio. Done shortly before the pandemic shutdown and California fires, he relocated and rebuilt a new studio. For anyone that’s ever moved, you know how refreshing it can be to make a move. You deep clean and come up with new things to focus on and create. For Jourgensen, it was music.

The last thing I see for the change was the physical band lineup. Ministry has always been a rotating lineup of members coming and going, but this time around we see new members on guitar and drums that add a new dimension to the sound structure. Taking over on guitar for Sin Quirin is Monty Pittman. A session and gigging player who’s played with everyone from Madonna (Yes, that Madonna) to Prong. In this roll we see him taking on the darker side of rock holding down stage right. Armed with a simple guitar rig set up, the sound was still somehow full.

Another major change was bringing back touring drummer, Roy Mayorga. Mayorga sat in on drums in 2017 when Ministry played Riot Fest in Chicago. He’s back now and contributing on the recordings as well as the live tour. Bringing in his vast background of session and studio work that reaches wide in the rock community from Stone Sour to Soulfly.

Another fairly recent addition was former Tool bassist, Paul D’Amour. After scoring D’Amour through his dentist connection, Jourgensen brought him in on the last tour supporting Slayer’s farewell tour and kept him. He’s now a permanent and contributing member and fitting right in with his background in alternative art rock.

These musicians diverse backgrounds and unique playing style mixed into the already established Ministry sound has made it different. Joining long time band mates John Bechdel and Cesar Soto seem to have blended the old, with the new and it works really well together building new color into the classic tracks with new riffs, fills, tempos and breaks. These are sounds you can only hear live. And it’s a breath of fresh air giving new life to these timeless hits.

Highlights from the night included hearing “Breathe” (the song the kicked off the original 1989/90 tour), ‘1000 Homo DJ’s’ cover of ‘Black Sabbath’s’ “Supernaut” and “So What” off 1989’s ‘The Mind Is A Terrible Thing To Taste’. Each with a new spin that doesn’t detract from the original but when you hear it today it’s somehow different and you love it. Other surprises included rarities from one of Jourgensen’s side projects, ‘Pailhead’ where we got not one, but two songs, “Don’t Stand in Line” and Man Should Surrender”.

Ending the set with “So What”, the fencing comes down. Jourgensen comes back up front and thanks the audience for coming and says, “Chicago has always held a special place to him” Continuing with “Coming home feels fucking great.” He then let us know what’s up next explaining the first set was classics of old shit for us to enjoy but this next set is all new. They kick off with “Alert Level” followed by “Good Trouble” and ending with the ‘Iggy and Stooges’ cover, “Search and Destroy”. And destroy they did as fans crowd surfed throughout the night, chanted along with the hits and massive confetti canons went off covering the Riviera and its guest in little black paper.

For those who have been on the fence about going to this show, let me tell you, you will regret not going once it’s over. Jourgensen, notoriously not a fan of playing classic Ministry songs in the past, just may not break these out again for who knows how long.  In a previous interviews with In The Loop Magazine stating, “I just don’t like rehashing the past shit. I know that the fans like it, but I always want to move forward in music”. He also said, “So, I’m doing this for the fans, I’m giving it back to them if this is what they want.” But for how long is the real question. Sure, it’s great to hear the songs that we grew up with, but I like hearing new stuff too and seeing a band grow. I love the legendary songs like everyone else, but need the new as well. If you haven’t seen this tour, you need to. It may be your last chance to hear these songs live again.

For more on Ministry and the Industrial Strength Tour, click here

For photos from the show at The Riviera, click here