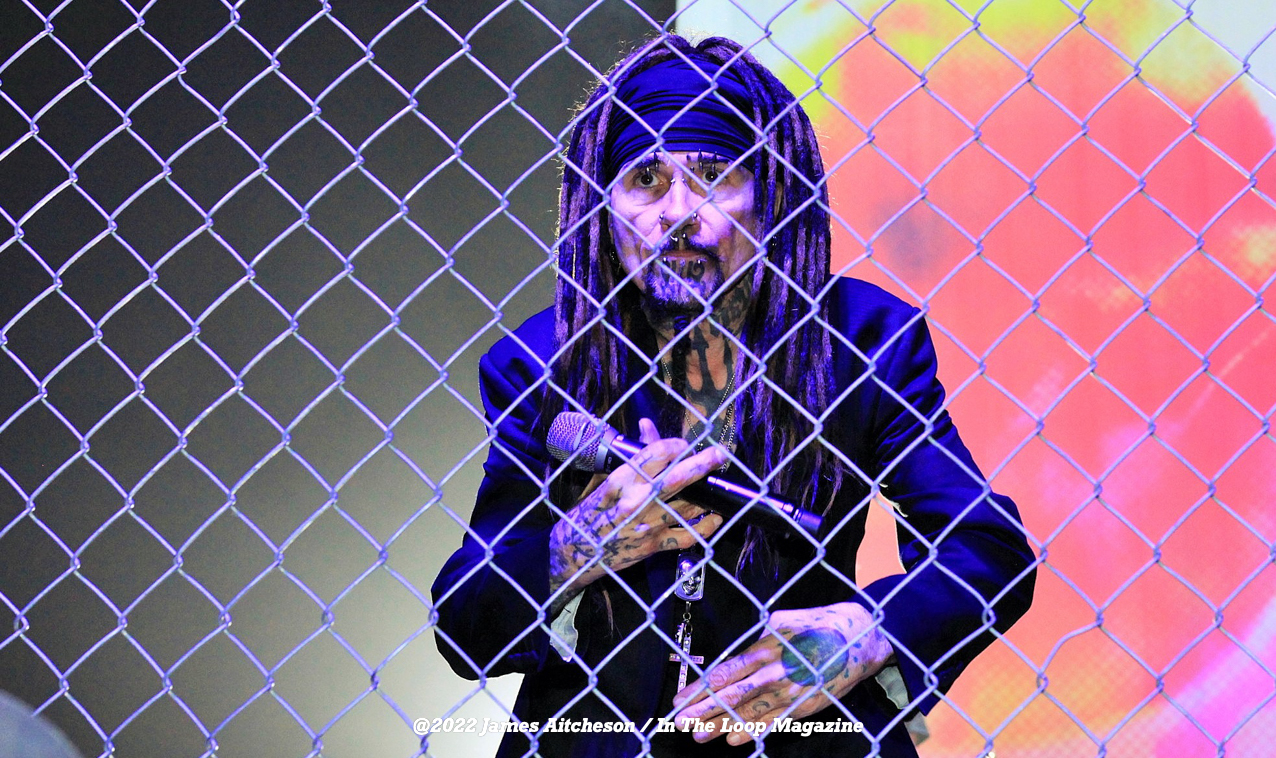 In The Loop, On The Road Series: Ministry @ Ryman Auditorium Theatre, Nashville, TN

Rev. Al Jourgensen brought his traveling revival to the hallowed grounds of the legendary Ryman Auditorium and his preaching (singing) shook the floors like an old clergyman ranting of the rapture. No, literally, the floor moved during the bombastic, fierce and LOUD performance this Saturday eve, and it was marvelous.

I’ve seen Ministry numerous times and I couldn’t quite recall a time where Al addressed the crowd prior to a performance, but his great understanding of music and history showed as he took the time to honor this historic venue and show his appreciation to be able to share his musical gifts on this legendary stage….and what a stage it is festooned with glass cases rich in history from original handwritten Johnny Cash lyrics to a suit from Bill Monroe, the venue is an absolutely gorgeous monument to music.

Now on to the show – COC and The Melvins ripped through their sets of sludge metal and sludge grunge that made your sternum rattle, some critiqued this as an odd pairing to open the tour but the sure fit when it comes to ferocity musical width.

Ministry started by blasting through a set that included some rarely heard gems from the Mind Is A Terrible Thing To Taste album, since this tour was a celebration of the 30th anniversary of the record, of course. From ‘Breathe’ to ‘Burning Inside’ these scorchers were met with banging heads and raised fists – these are Ministry classics. Where the real surprises came was with the band dusting off other songs that were recorded during the MIATTT album but ending up on one of the Luxa/Pan producing teams many side projects. Most notably was a couple from the Ian MacKaye collaboration ‘Pailhead’, two songs: ‘Dont Stand In Line’ and ‘Man Should Surrender’ were a joy to hear all these years later, great songs and they sound as fresh as anything recorded by a ‘heavy band’ in the last 20 years. Other non MIATTT classics like NWO made the set list … a song who’s warning some 30 years ago reads as fresh today as it was then, and a new mix that the band played of the song should be recorded and released – a fresh take one of Ministry’s finest songs. For the encore the fence came down and 3 tracks off of the new Moral Hygiene album were played – tight and aggressive these songs fit right in, especially ‘Good Trouble’ as the venue sits about one block from John Lewis Way and a massive mural in his honor.

A quick note about the band, Cesar Soto has really cemented himself as spine of the live band and along with veteran axeman Monte Pittman they have really provided the best 1-2 guitar punch since the Svitek-Scaccia days. Mayorga on drums is a monster, D’Amour on bass lively and Bechdel on keys has long been the glue: This may be the best live version of Ministry in 20 years – fresh, intense and technically on point.

For photos from the Ryman Auditorium Show in Nashville, click here