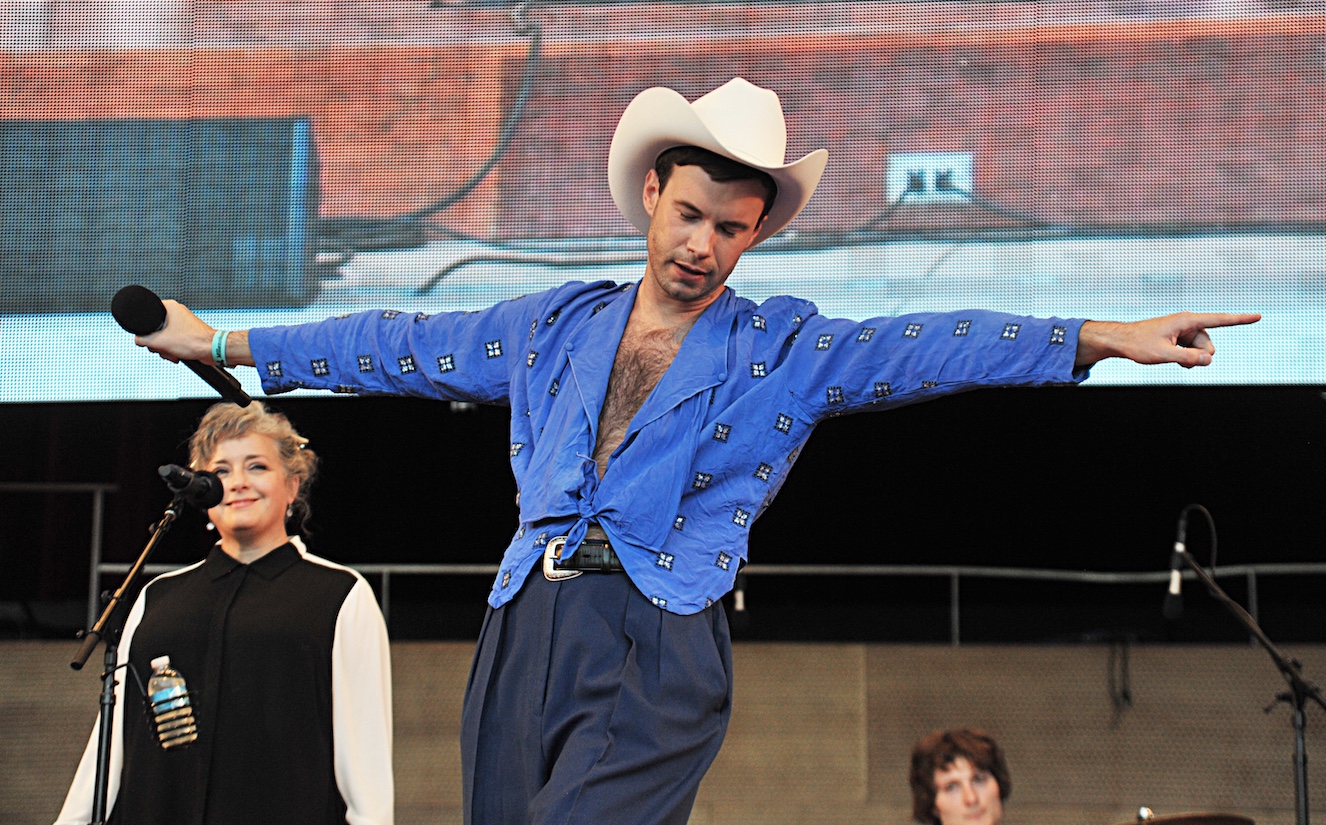 You would think it would be enough that California ex-pat Andrew Sa has, in the last five years, established himself as the owner of one of the most elegant and beguiling voices to land in Chicago (think of the oddball love child of Billie Holiday before smack and whiskey ravaged her voice and a young Bryan Ferry before he lost his soul). You could assume that landing a popular residency with his Cosmic Country showcase at the Hideout Inn while popping up in various musical/theatrical events like the David Bowie inspired flaming (brilliant) mess Floor Show, or producing his own extravaganzas (his Killer Ballads: A Night of Murder Ballads and Other Songs about Death at The Old Town School of Folk Music was one of the best shows of 2019) would be more than fulfilling. As evidenced by his August 16 show and film premiere for Andrew in Anotherland, as part of the city sponsored summer concert series at the Pritzker Pavilion in Millennium Park you would be sorely mistaken on all accounts.

Sa’s romantic attachment to country music is, by now,  legendary. No one has quite the skill and precision in this town to conquer nuanced chestnuts like Bobbi Gentry’s “Ode to Billie Joe” or Patsy Cline’s reading of “Walking After Midnight,” while shrouding them in just a whisper of melancholy without over kill. The moment of religious transcendence for me was his take on Iggy Pop and Bowie’s “China Girl” in Floor Show, with him dressed in Judy Garland drag near the end of her life. That reading gave the song a dark, spooky, twisted vibe which transformed the yellow brick road into a shadowy grime soaked back alley.

For this concert, which served as a hearty appetizer for Sa’s bonkers take on Alice in Wonderland, he surrounded himself with a killer band (Spencer Tweedy, Lane Beckstrom, Liam Kazar, Dorian Gehring, Sima Cunningham, and Macie Stewart) and some of the most stunning vocalists around (Kelly Hogan, Hawk Coleman, Alex Grelle, Cunningham, and Kazar).

The movie, Andrew in Anotherland, finds a slightly sad Sa tumbling down the rabbit hole with the help of some bitching weed where he meets Grelle (as a wild eyed  Edgar Winter clone), Hogan (who delivers a slightly neurotic take on her song “They Shoot Horses Don’t They” dressed as a prim Nurse Ratched), Coleman (as a slyly cool funk prophet oozing charm during a percolating version of Talking Heads’ “Slippery People”), and among others drag goddess Lucy Stoole (doing a straight faced cover of Prince’s “Cream”). That hardly covers all of who and what is packed into this mini-epic with numerous cameos crammed in like sardines (among them Max Goldstein, Robin Lee, TransFat, Tenci, SuperKnova, Space Gators, Garnett Williams, and Sam Cantor) or the pizazz and punch that director Jesse Morgan Young uses to fuel the visuals and soundtrack. Andrew in Anotherland is dizzy, loopy, energetic, sly, funny as all get out, and this years’ big flaming masterpiece. Coming after the concert, it was also pretty exhausting and exhilarating…but in a good way.

The live show got off to a relaxed start with Sa joined by his band for a throaty take on Chris Issack’s lilting “Wicked Game” which found him sounding drugged and seduced rather than befuddled as in the original. Sa had too much fun with the Jumbotron projection of himself behind him until Kelly Hogan sauntered out and joined him for a bluesy duet on “Under the Boardwalk.” The both of them had a fine time with “Sand” before vocalist Connie delivered a searing midtempo version of “I’d Rather Go Blind” and drenched the pavilion with naked soul and a stark glimmer of sad desperation. As if there wasn’t enough drama with that performance, Alex Grelle came out next, dressed in ermine. black velvet and pearls for a slightly over the top straight-faced reading of Annie Lennox’ “No More I Love You’s” which was refreshingly queer, a touch torchy, and altogether enthralling.

Next up were Cunningham and Stewart as OHMME with a pretty forward acoustic version of The Sugar Cubes “Birthday” which shimmered and glowed. Liam Kazar, sporting a full head of pink curls then joined Sa for a reading of “No Time for Eternity” and a solo run at “Shoes Too Tight,” both from his just released Due North (on Mare/Woodist Recordings). “Shoes to Tight” with its measured womp gave the show a lift and Kazar, who has turned up in performance on WGN Television as well as his pop-up food truck is shaping up as someone to keep an eye on. All of this melded into the arrival of Hawk Coleman who has one of the grittiest, sweatiest raw soul barks on the planet. For this outing he ripped through Aretha Franklin’s “Rock Steady” with a soaring thunder and minute precision that seemed highly appropriate (the audience seemed to think so…half of them put that brie and white wine down and started shaking those asses like the fate of Western Civilization depended on it). After all that gyrating and stomping, Sa and Cunningham brought the show to a nuanced close with a gently damp duet of the old Nazareth rocker “Love Hurts” which was so lovely it brought back the tears.

I shudder to think on what is Sa’s next venture, whether it be music, film, or theater but i am looking forward to it. The turnout for this show was sizable enough that he and all of his fellow performers on that evening are no longer unknown names and word of mouth will give them the audiences they deserve. Here’s hoping …