Australian Swam Rock Legends, The Scientist, Release More Tracks To New Album Due Out This Summer 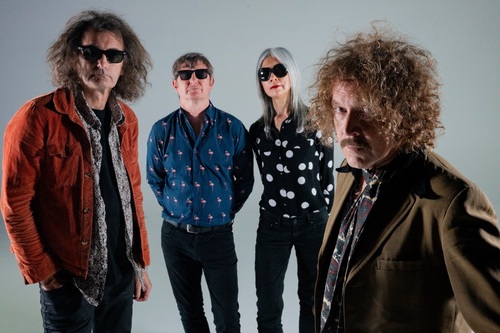 The Scientists’ powerful brand of deranged swamp-rock returns with a vengeance on June 11, when Los Angeles’ In The Red Records unleashes Negativity, an all-new magnum opus featuring the first new full-length album by the Australian band’s penultimate line-up in 35 years.

The first track from the album, Outsider, was released last month, along with a video, directed by Andrew Watson. I Wasn’t Good At Picking Friends, the second track taken from thealbum,premiered on Henry Rollins’ KCRW show over the weekend and is out today on all digital platforms. Says Kim Salmon; “So Tony Thewlis, the Scientists lead guitarist, sends me a riff and immediately a chorus pops into my head singing “Beware, the Ides Of March!”. Now this is inappropriate coz’ this is a ‘chorus’, as in a Greek Tragedy, and the line’s from Shakespeare’s depiction of ancient Rome! It don’t matter! It’s only Rock n Roll. I run with it. No soothsayers, just a chorus of female backing singers! So what do I sing? Well obviously! I’m Julius Caesar now and I have to turn “et tu Brute” into a punk rock song! How do I do that? Well, Tony’s riff makes the racket people have come to expect from the Scientists! Add to that equal measures of drum and bass chaos and throw in an atonal fuzz guitar solo for good measure! Sounds like the Scientists to me! Will the punters buy it? We don’t care! I guess we’re still the same old punks we always were…..”Negativity is the third Scientists release and the first full-length album for In The Red. The current quartet cut the single “Braindead”/“SurvivalsKills” in 2018 and the five-song 2019 EP 9H2O SiO2, the title of which translates (in a hat tip to the lyrics of the group’s classic “Swampland”) as Nine Parts Water, One Part Sand. Those recordings were issued in conjunction with the group’s first two U.S. tours during that period.

Salmon, who founded the Scientists in Perth in 1978, says with a laugh, ““My attitude was, old bands doing new stuff, it’s always rubbish. I just wanted to leave it alone. I thought, well, if we just snuck a single by every once in a while, we could get away with it.” Happily, rousing receptions during the band’s American treks and a sense that fans would welcome a new full-length project resulted in sessions for Negativity.

The album was completed transcontinentally: With the band producing, Myles Mumford (who worked on both the earlier In the Red releases) and Jozef Grech recorded. Negativity – the Scientists’ first full-length collection of new material since their 1987 last bow Human Jukebox, recorded by a trio fronted by Salmon – is the culmination of a long journey for its four members. In 1984, Salmon, Thewlis, Sujdovic, and Rixon, who had moved from Perth to Sydney on Australia’s east coast in 1981, relocated to London to try their hand at the larger English market. Salmon, his wife Linda (who was then managing the band), and their son moved into a house also occupied by 20-year-old Cowie (then known by her maiden name, Leanne Chock). Salmon recalls, “Linda kind of appointed Leanne to be our tour manager, and she did an amazing job of it. She really paid attention to details. And she was as much of a rock ‘n’ roll animal as Brett or Boris or Tony.“When Brett left the band in 1985, we tried a bunch of drummers. The thing was, they were all proper musos and brought baggage to the band, and it wasn’t welcome. Leanne had been teaching herself drums from what she learned from watching Brett, with no knowledge of music whatsoever. We gave her a chance, and it sounded like the band again.”

Embroiled in a conflict with their Australian label, the quartet entered a London studio with producer Richard Mazda in mid-1985 and re-recorded several of their old hits in an attempt to reclaim their catalog. The resultant Karbon Records album, the ferocious Weird Love, became the only Scientists record to see contemporaneous American release when it was issued by Big Time Records’ U.S. imprint in 1986. By that time, Cowie had exited the group, which called it quits the following year. However, you can’t keep a good Scientist down, and in 2004 Salmon, Thewlis, and Sujdovic booked some live dates employing hired hands on drums. Salmon says, “When we got to Sydney, for the encores we got Leanne up. And people were saying, ‘Hey, get her back in the band!’ We thought, OK, if we do it again, we’ll get her. Leanne is part of the Scientists’ essential chemistry.” Over the course of the next 15 years, the reconstituted Scientists returned to the stage and the studio. In 2006, they played the All Tomorrow’s Parties festival in London; a concurrent date at the Shepherd’s Bush Empire was recorded and released as Sedition in 2007.

The Numero Group’s comprehensive four-CD box of 2016, A Place Called Bad and the label’s subsequent LP reissue of Weird Love ignited wide acclaim and refreshed interest in the group, and prefaced the association with In the Red. The present situation of band members in two far-flung countries has led to some changes in both writing and record production for the Scientists.

As in earlier years, Salmon is still the principal songwriter, but now all hands contribute to the material. Salmon’s interest in drumming has played a large role in that reorientation. “I’ve been sort of teaching myself drums over the years, and I’m probably still the world’s worst drummer,” Salmon says. “I’ve been sort of jamming beats all along. I kind of cook ‘em up in my head, just getting a good groove going. I’d jam away on the drums in a practice room, and if I got something good that I could sing to, I’d start recording myself and send it over to Tony and wait for him to send me a riff back. And that’s how we wrote most of the album. I realized after the fact that Tony should be the riffmaster.“Generally what happened was, Tony sent the riffs back, and then Leanne, Boris, and I got together, and the three of us knocked the songs into shape. That’s how everybody’s name got on the songs. In that part of the recording, Leanne does take a very active role. Once you start talking about form, how you’re going to execute it, she’s very much part of the writing process. They’re all part of it.” Raw, freewheeling, and spattered with the high-voltage sound the Scientists have drawn from such influences as the Stooges, Suicide, the Gun Club, and the Cramps, Negativity is jubilant, unpredictable listening. A solid crop of fresh originals is highlighted by the opening statement of purpose “Outsider”; the offbeat, yowling waltz “Naysayer”; the hilarious, self-mocking “The Science Of Suave,” which Salmon says was inspired by the work of his countrymen the Moodists; and the utterly surprising “Moth-Eaten Velvet,” a Velvet Underground homage in ballad form that features a three-piece string section.

Instrumental guests on the album include producer Mumford, who contributes trombone on “Make It Go Away,” and Salmon’s daughter Emma, who essays piano and background vocals. In all, Negativity is a typically bracing, unpredictable, wild, and loud affair that will engross both longtime Scientists aficionados and new arrivals as well. Offering a summation, Salmon says, “People think of the ‘80s as being keytars and mullet haircuts, but there was another side to all of that, and we were part of it. This record is another thing again. It is like a contemporary version of the Scientists of the ‘80s. To me, that’s cool.”

7. The Science Of Suave

8. I Wasn’t Good At Picking Friends

One thought on “Australian Swam Rock Legends, The Scientist, Release More Tracks To New Album Due Out This Summer”