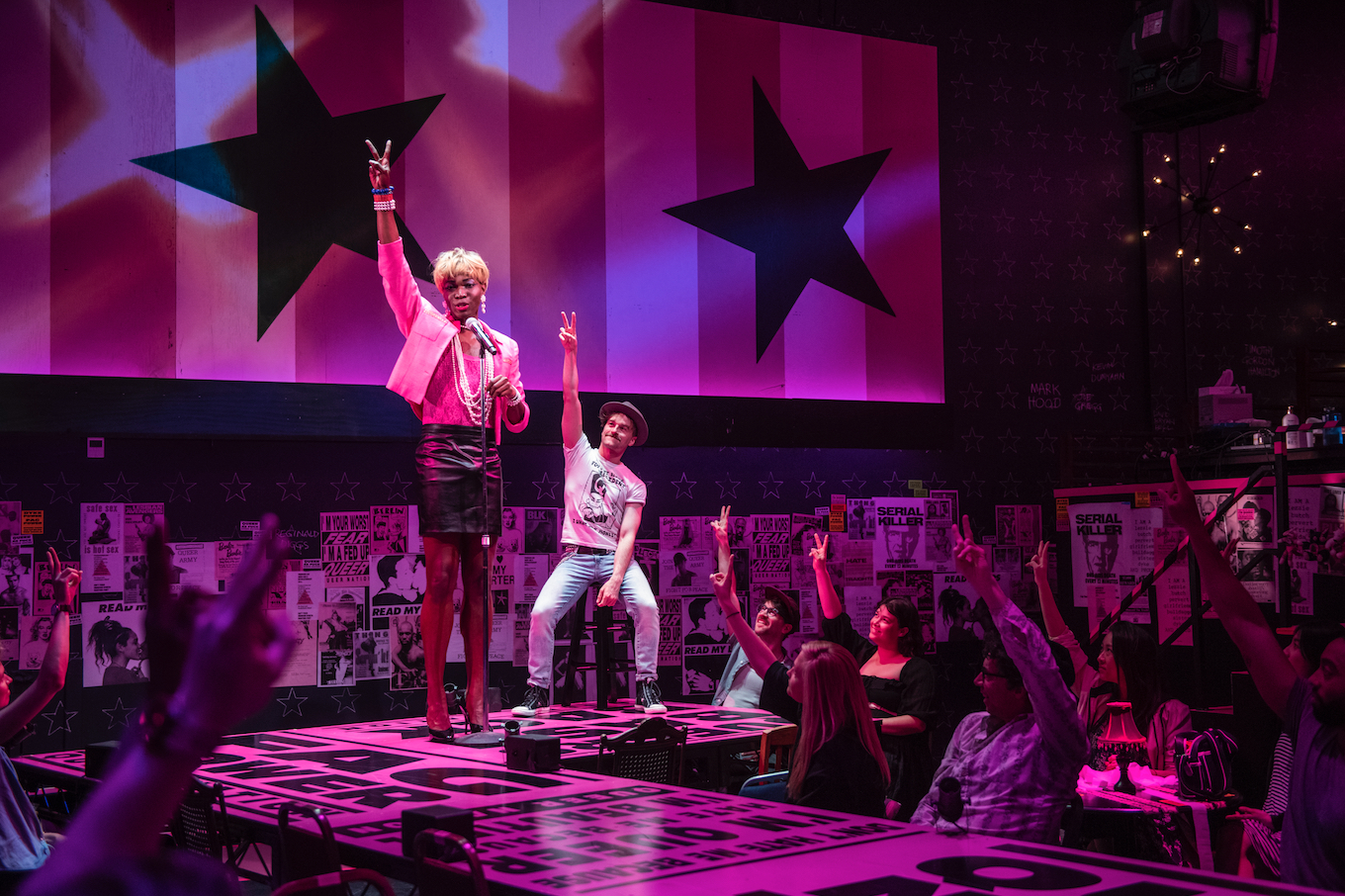 “Ms. Blakk for President,” the new Steppenwolf play from Tina Landau and the Oscar-winning playwright Tarell Alvin McCraney, is thrilling before it even properly begins: there is David Zinn’s spectacular scenic design, which transforms Steppenwolf’s entire upstairs theater in a runway space equal parts glamour and urban grit, with tubular-televisions descending from the ceiling and posters/chalk writings upon the walls; there is Lindsay Jones’ sound design, which booms out such ‘80s stalwarts as Whitney Houston and “You Spin Me Right Round”; and most importantly, there is the play’s cast, which mingles with the audience and, critically, owns the runway/stage, performing upon it to various degrees – whether it’s Jon Hudson Odom’s burlesque or Sawyer Smith’s spectacular dance moves (right down to a flawless splits!), the pre-show immediately thrusts the audience into both queer and drag culture of the early ‘90s, an essential achievement for a show this considerate of historical relevancy.

Set in 1992, “Ms. Blakk for President” is, as the title would betray, concerned with a presidential run, but not a rudimentary one: Joan Jett Blakk (McCraney), the drag queen persona of Chicago performer Terence Smith, is running for the Democratic nomination on the Queer Nation ticket, all in an effort to force LGBTQ issues into a national political platform. With homophobia entrenched in U.S. society and the AIDS epidemic still very much present, there is a fierce urgency to Blakk’s candidacy, although her campaign is hardly one of dour talking points; rather, McCraney’s Blakk is vibrant and vivacious, working the crowd and making various proclamations (including “legalizing all drugs and taxing the shit out of them”). Complementing Blakk’s stump speech is a delightful music video that plays across the televisions, featuring McCraney and the wondrous bass of house music.

From there, the show explores both Blakk’s biography (which included a mayoral run here in Chicago in 1991 against Richard M. Daley) and her efforts to take the stage at the Democratic National Convention in New York City. Along the way, we are treated to some remarkably honest scenes of writing and acting from McCraney, Landau, and their terrific cast. This is not surprising – McCraney’s “In Moonlight Black Boys Look Blue” was the basis for the Oscar-winning film “Moonlight,” and McCraney received an Oscar with director Barry Jenkins for their adapted screenplay – but it is enormously moving watching McCraney’s Blakk describe the central importance of David Bowie in her sexual awakening, or the moment when, halfway through the show, we see Blakk out of drag as Terrence Smith, clad in jeans and a shirt, wearing no makeup. The moment follows a failed attempt to enter the DNC (a New York cop stops the flamboyant Blakk outside the Madison Square Garden venue), so Blakk decides to dress down in an effort to enter the DNC and profess Queer Nations’ platform. It’s a moving, albeit painful moment that perfectly captures both the joys and tensions of radical politics: sticking firm to one’s truth (by 1992, more than 100,000 people in the U.S. had died from AIDS), yet feeling the urge to compromise for the sake of greater exposure to the electorate.

Ultimately, Ms. Blakk did not make it to the DNC stage, and her candidacy never did take off; yet, it is thrilling seeing this dynamic character – one who I knew nothing about, prior to the show’s start – receive such a warm, reverential tribute; furthermore, this play asks us to realize that nearly two decades after her run, Ms. Blakk’s platform is more accepted in American politics than at any time before, yet critical work remains to be done – and this bold effort from McCraney and Landau is undoubtedly part of that work.