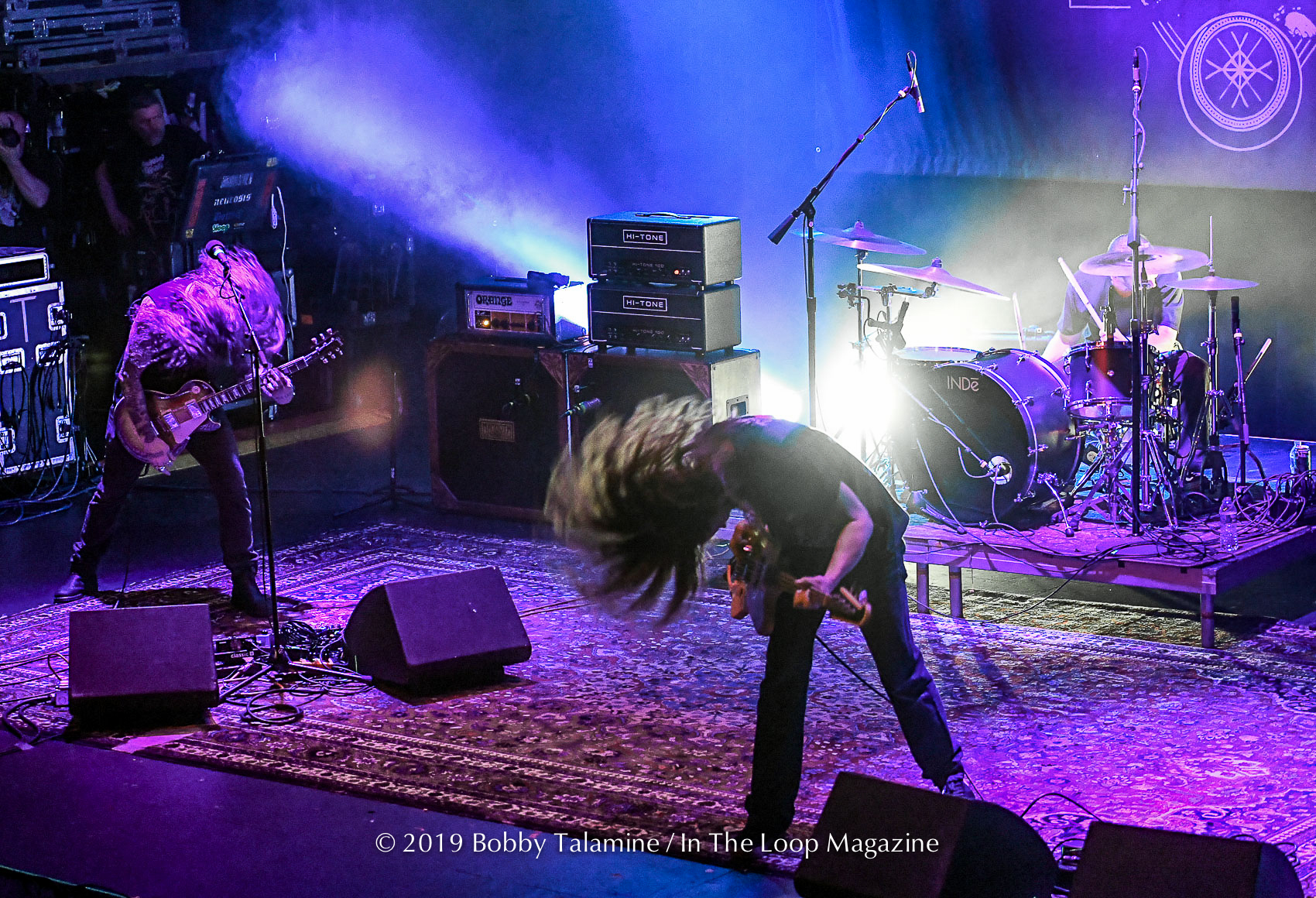 By all intent and purposes when witnessing YOB performing live, you have to focus your attention on its frontman- Guitarist / Vocalist Michael Scheidt, what with all he’s been through the past couple of years with hellish medical scares and whatnot.

This is a truly special band on so many levels, made more so for surviving all the scary bullshit, come out the other end somewhat intact, release an album of epic and downright heaviness in “Our Raw Heart’ and continue what you do best- perform these motherfuckers live, pushing amps and in house PA’s to their limits.

This is cathartic and much needed Doom, where your soul aches for more of this, done so righteously and with such verve.

Oh how I’ve missed this kind of music done so right.

Heavy and heavier and heaviest from the start, with blast furnace beats brought to you by the thunderous Travis Foster, and the top heavy yet oh so nasty Bass by Aaron Rieseberg.

This three piece are so inspiring, and so on point, dredging up pain with improvisation at a moment’s notice- the true definition of a three piece acting as one and the same.

How is this done so elegantly and cleanly?

Simply look at how Michael has placed himself onstage, stage left / audience right, facing right at bassist Aaron, when not head thrashing and hair raising to the insanely heavy beats, he’s staring down Aaron waiting like a viper for the next riff attack.

That- and there’s no subtracting on volume throughout this monumental set, with the initial crunch of guitar, followed by epic riffs after epic riffs.

There’s nothing like spiritual and cathartic healing through all things doom, brought to you from the wunderkind Michael Scheidt, clearly reveling in the might and fury, all bathed in sweat 2 songs in, and even during a guitar breakdown four or five songs in, starting again from scratch with a trusty Les Paul, and even that couldn’t derail this band from pushing forward.

What else can you say about this band – this epic performance?

Look at it this way.

And again coming full circle: Michael Scheidt’s triumph over acute diverticulitis, and coming out the other end, and simply getting on with it- we have music to create, above and beyond.

Yeah baby. My kind of guy. A true survivor, a warrior, with the heaviest and most earth shaking riffs not heard from anyone else in a long time.

Lord- we welcome thee, and are blessed to hear these guys slay away at Chicago’s Thalia Hall.

(with Levy Seynaeve of Amenra)

6. Breathing from the Shallows

And now for a complete 180 from opener Amenra:

The life of the party, where all hell breaks loose on the main floor of Thalia Hall, a circle mosh pit is observed, splitting the main floor crowd into two, front and back, and what looks like a mosh pit in diameter of at least 20 yards in circumference.

There ya go- the build up to all things YOB, courtesy of Denis “Snake” Belanger, Lead Vocalist for Voivod.

They waste no time in building up a kinetic and frantic party frenzy, zipping about onstage to rally the masses, trying their best to hold true to there original material- but alas, things go off the rails on occasion, deliberate- who the F knows, and  we don’t care.

The crowd eats it up, what with the other original longtime member of Voivod- drummer Michel “Away” Langevin.

It’s Michel who does his absolute best to keep the band intact song in – song out, a time machine of epic proportions for a band as crazy as this- the main man responsible for the creation of the mythology of the post apocalyptic vampire Lord Voivod, and the man responsible for all the science fiction themes at the core of the band’s universe.

Crazy as that sounds- the chaos and mythology and utter weirdness works and works and works when these knuckleheads perform live, without a care in the world, except for the occasional hard swig of beer, and then on to the next tune of sorts.

Batted down with awesome Lead and Rhythm Guitar from Dan “Chewy” Mongrain, flailing away with unconditional abandonment stage right / audience left, eyes rolling skyward in all the fun as if he’s in on the joke, but who cares at this point, and the heavy bass beats supported by Dominic “Rocky” Laroche, who seems the most sane onstage as if that’s to be believed- but again- who the F cares..this is one of the most iconic of all Canadian thrash metal bands.

And you better be in on the party fellas.

I mean all in.

Again- fun times- even in the unpredictable moments.

Amenra- A Belgian band currently on tour in the states opening for the band YOB.

Transfixed from the start of their performance- I was.

Didn’t know anything about the band at all- no investigating at all prior to seeing them perform live at Thalia Hall Chicago.

Colin H. van Eeckhout- kneeling what looks like in prayer facing the drum riser, back to audience, possesses two drumsticks which he deliberately cracks together in a conscientious beat, slowly, deliberately, with the building drone of guitar from Mathieu Vandekerckhove, building in atmosphere and spiritual intensity that has to be witnessed to be believed.

From the start, you can hear a pin drop in the venue- everyone silent, observant, letting the band, accompanied with striking backdrop visual art, progress in their unique take on otherworldly metal, for lack of a better term.

Although insanely hard to photograph these guys from beginning to end- what with the dimly lit atmospherics, let alone 98 percent of the show Colin’s back is the facing the audience, looking towards the drummer Bjorn Lebon, as if in a spiritual trance, letting out sudden shrieks of despair as the music builds and builds.

Amenra describe their performances as “spiritual communions”, and now I know why.

Even limited to only 45 minutes of set time- this was truly a special performance from beginning to end.