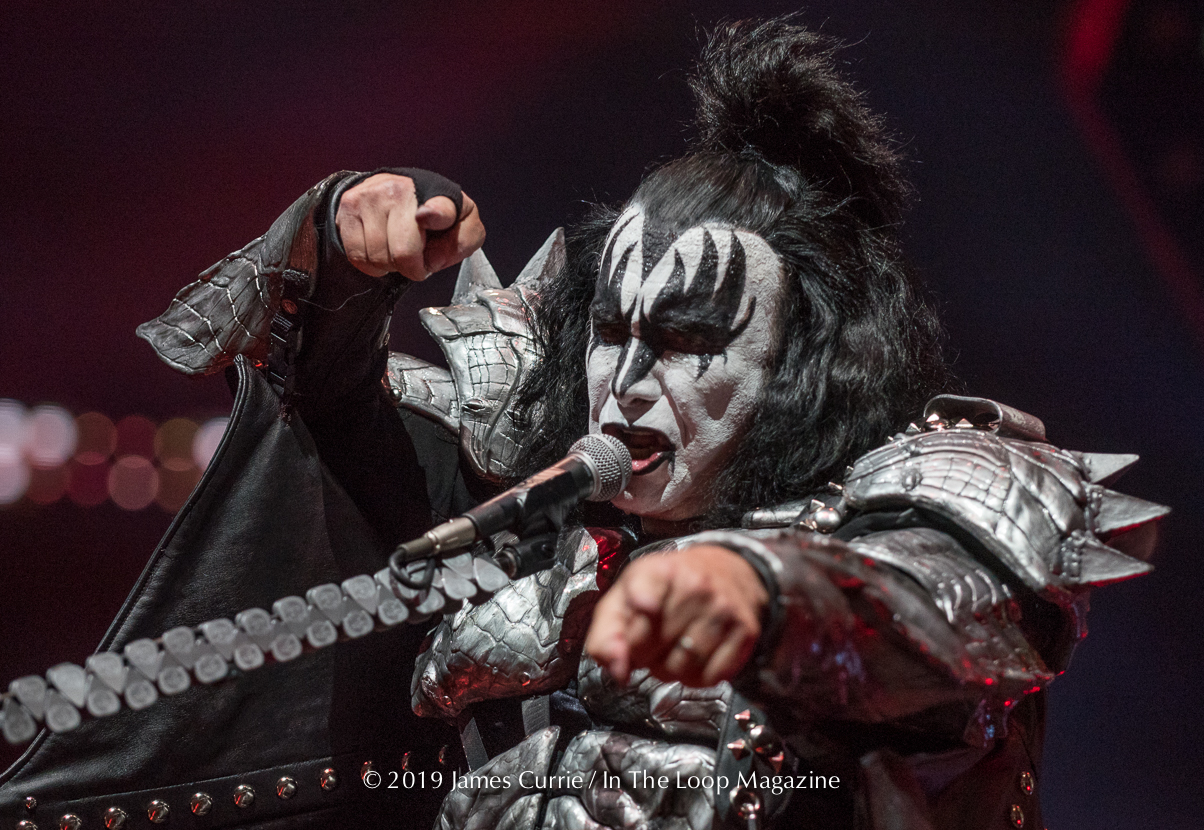 With enough fireworks, pyro, and flashpots to light up the next forty new years, Paul Stanley, Gene Simmons, Tommy Thayer, and Eric Singer made good on their promise to end KISS’ legendary forty-five year career with their biggest live spectacle ever this past Saturday at the United Center.

Much has been made over the last ten or so years about the likelihood of rock bands actually retiring; indeed, KISS has already had one ‘farewell’ tour (which did indeed prove to be farewell to founding members Ace Frehley and Peter Criss), and everyone from Motley Crue to Black Sabbath have had their owns shots at a final goodbye. It could be argued that as long as people are willing to turn out in droves for a band after more than four decades in the game, why end it at all? While we can’t know for certain that this is truly it, it the career-spanning setlist did indeed feel like the end of something, and all indications point to this truly being the ‘end of the road.’

And, as one would imagine, it was one hell of a party. Paul Stanley, the ultimate ring-leader of KISS’ psycho circus, remains one rock’s greatest frontmen, and what more can be said of Gene Simmons’ iconic stage antics? Every trick in the book was on display, as Simmons’ breathed fire at the end of “War Machine” (one of the band’s smartest setlist returns in recent years), spat blood during “God of Thunder,” and generally walked a line between his menacing demon persona and the flip side of Stanley’s coin as the band’s on-stage MC. (Of course, largely gone are the hip-thrusts and suggestive behavior of yesteryear, as the KISS crowds of 2019 are three-generations deep, and small children in various stages of makeup were abundant; it’s sweet to see, though it does offer some sugar-coating over songs like “Love Gun” and “Heaven’s on Fire” that spell out the band’s mindset pretty clearly already.)

Guitarist Tommy Thayer and drummer Eric Singer both got their solo moments to shine, with Thayer shooting rockets from his guitar and Singer’s turn at the piano for the lead vocal on stalwart ballad “Beth” coming across as surprisingly affecting. While it’s the elephant in the room that most diehard fans would have preferred to see KISS’ last tour as a final reunion with Frehley and Criss, not an unkind word could be said about the ‘other two,’ as both are strong players and excellent showmen in their own right. Besides, that argument dates all the way back to the early ‘80s and comes with little fresh perspective on KISS’ position for an entirely new generation of kids and teenagers who never knew the original lineup to begin with. That KISS has sustained their career over nearly a half a century is no small feat, and that doesn’t just happen as a result of cartoons and schtick.

It comes from classic melodies and singalongs like the ones behind “Cold Gin,” “Lick It Up,” and “I Was Made for Lovin’ You” (a rare treat, as the band hasn’t trotted their biggest hit out in many a tour, and it sounded great). It comes from the bombastic riffs of “Deuce,” the cocksure swagger of “Do Ya Love Me,” and of course, the all-time greatest party anthem, “Rock N’ Roll All Nite,” which saw Simmons and Thayer carried in the audience on hydraulic lifts that threatened to span the length of the United Center. It comes from, as Stanley noted toward the end of the show, a concert truly becoming a night you will never forget.

When it comes to KISS’ legacy, what will be said, particularly in light of how the rock scene and concert industry have both evolved over the last forty years? The simple version is that KISS learned how to sell what excited them; say what you want about the marketing, the toys, the lunchboxes: watch any video from ’76 and tell me that those guys don’t absolutely love being on that stage together. Before they were a cultural phenomenon, they were dudes from New York who wrote some timelessly great songs about sex, partying, and good-natured hedonism—four guys in a loft who wanted to change the world, the dream of most rock bands at that flashpoint when they have nothing to lose.

The more accurate, far-reaching answer is that KISS, more than any band save for The Beatles, connected a kind of escapist fantasy to the world of rock n’ roll, and it changed everything about what came after it. The band has noted that the makeup designs somehow brought out their alter egos, who they truly wanted to be – no doubt, those same makeup designs are responsible for thousands of young musicians figuring out who they truly wanted to be, too. That’s nothing short of a rock n’ roll miracle, and here’s hoping we still see some of those after KISS have finally hung up their dragon boots.

For photos from the KISS show at United Center, click here