An Evening With Pat Metheny At Chicago Theatre 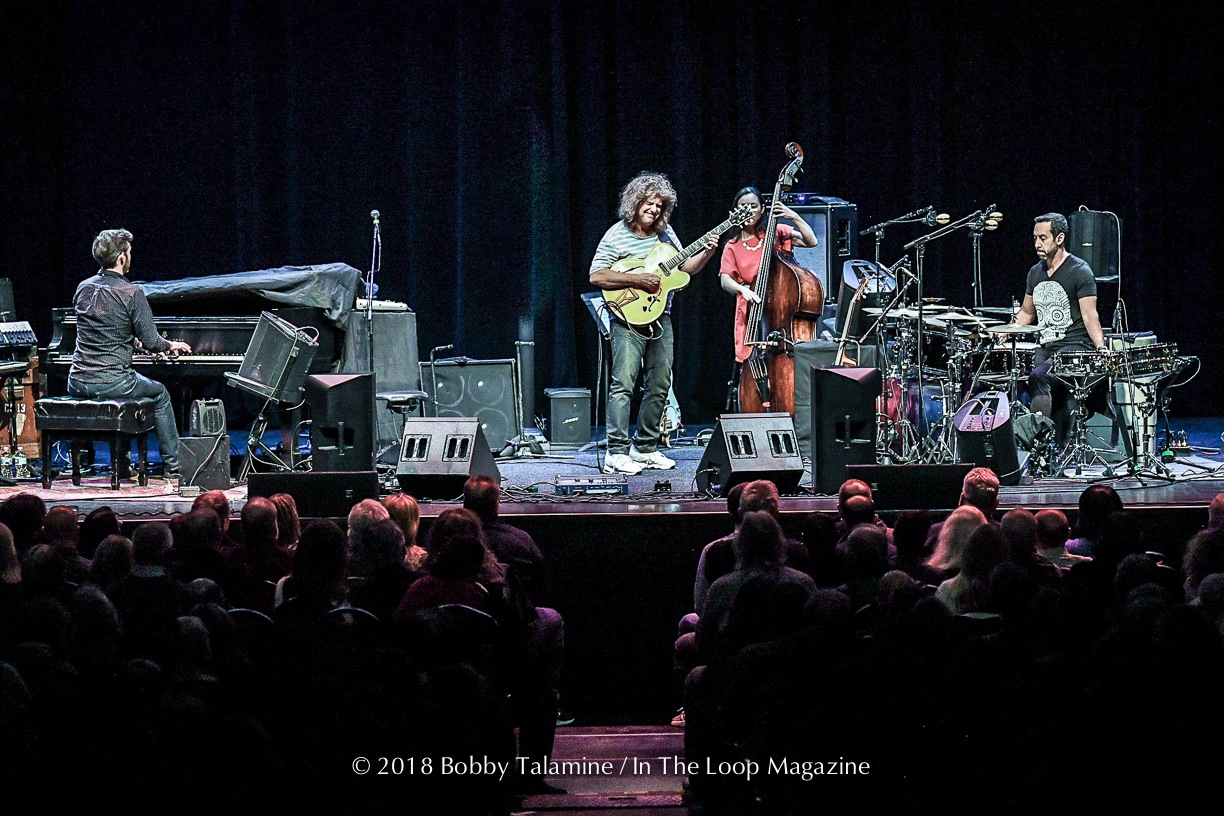 Pat Metheny, without a doubt, is a true rock star of Jazz. I really don’t know of any other way to put it out there. Pat’s unending popularity, the top notch musicians he always surrounds himself with, even in the way his roadies come to his aid in switching out instruments at a moment’s notice. Clearly when it comes to the guitar switch, it’s almost like witnessing a Nascar pit crew in the midst of a ten second tire change.

Pat’s current band, with pianist Gwilym Simcock, Bassist Linda May Han Oh, and drummer Antonio Sanchez, is a tight, ever present in the moment and virtuosic unit that is comfortable within Metheny’s large catalog of music.

Pat Metheny still has a contagious enthusiasm when it comes to performance: still bending notes and contorting his face in unison, down to his comfortable looking and relaxed look: always in blue jeans and white tennis shoes, a pull over shirt with stripes, and hair that’s turning gray and still unkempt, but cool. Can’t think of another jazz guy quite like him in appearance, and yet so gifted to his craft. And the show starts with Pat alone onstage, with that amazing acoustic 42 string Pikasso guitar of his.

A work of art, the Pikasso: strings running horizontally like any true acoustic, and yet strings also running at a 45 degree angle in between the double neck, making you wonder what the F- how do you play this thing, and not feel the least bit intimidated? The Pikasso is a custom instrument created for Pat Metheny back in 1984, with Pat assisting in the design, making it clear at the onset he wanted an instrument “with as many strings as humanly possible”. From previous interviews with Pat: the reason why he only plays it for one song, and why it never really is used much is because the instrument  is nearly impossible to keep tuned, let alone the time involved to keep it in tune. One song, the first song of the set with the Pikasso- well that’s fine by me. The song is called the “Pikasso Guitar Intro”, and it never ceases to amaze, both in the overall sound you hear, and in the complexity of it all. At some moments, you swear you’re hearing an acoustic symphony, like an army of acoustic guitars.

And then off we go into the set, starting with “So May It Secretly Begin”, into one of Pat’s first compositions “Bright Size Life”. It’s at this time I have to reflect on Pat’s trio of amazing musicians: Gwilym, Linda and Antonio, all accomplished in their own right, flexing their formidable chops when solo, let alone in full band mode, bouncing off each other with counter melody and then back again, all the while keeping things in check. From nice and serene melody and chords, to front and center free jazz, Pat’s band can do it all. And as for Pat: his playing is still as timeless as ever, and oh so recognizable.

You have to give Pat credit, playing the way he has for decades on now, growing as a player and as a writer, constantly experimenting, both in his writing and playing, let alone in the bands he’s developed over the years from the ground up. You want improvisational fireworks, you come to a Pat Metheny performance. You’ll leave shaking your head in wonderment like me, and I’ve been seeing Pat Play for over 40 years now, which truly is a testament to his talent and craft.