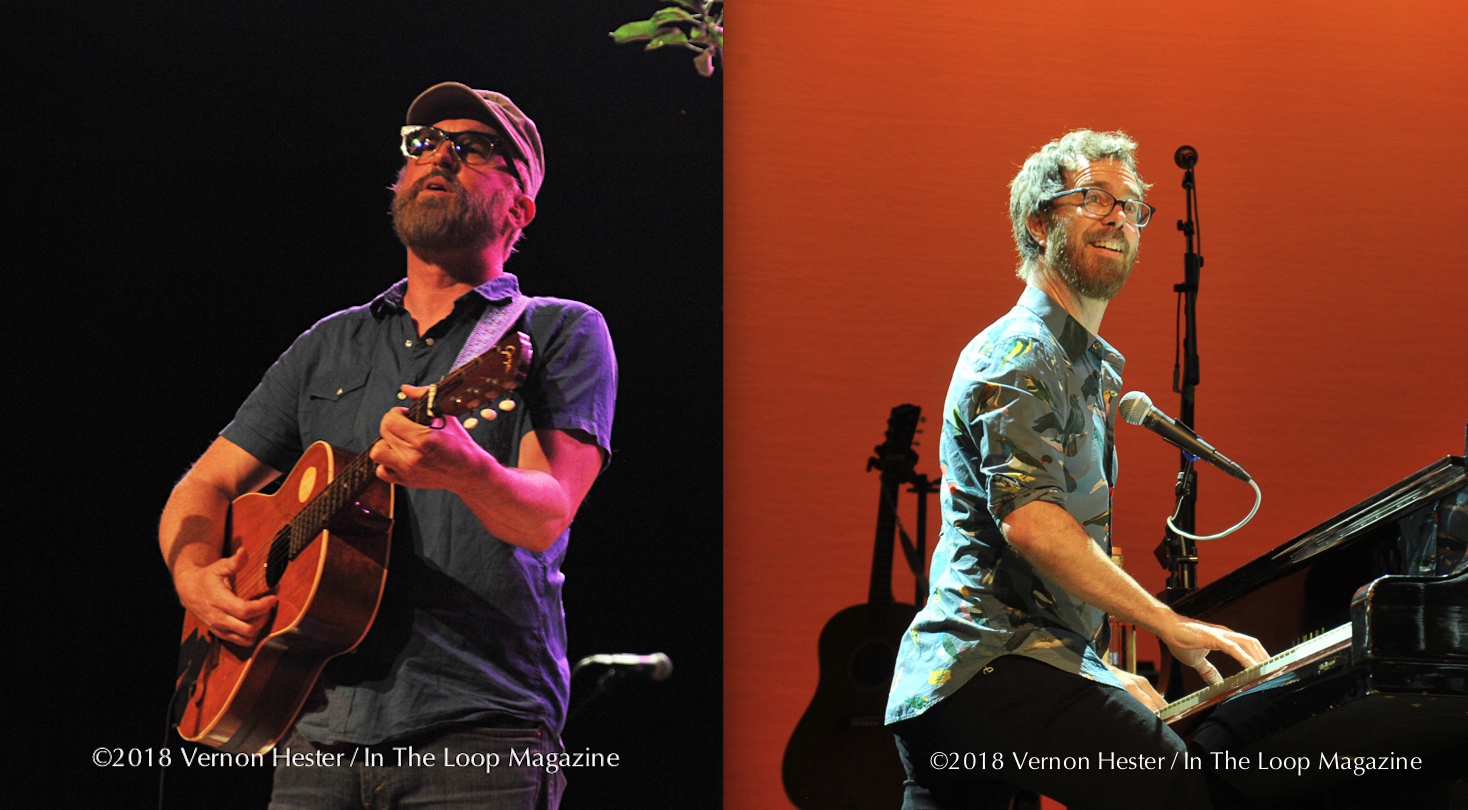 The idea of a double bill with Ben Folds and John McCrea and his band Cake (featuring Vince DiFiore on trumpet, Xan McCurdy on guitar, Daniel McCallum on bass, and Todd Roper on drums) suggests a collegiate hoedown with smart alecks. Granted, both artists emerged in the 1990s and offered something new for the time; Folds, a variation on brainy pop served up with an everyman sincerity and Cake a shockingly severe deadpan humor delivered with wit and intelligence. That both would tour together and fill the tasteful confines of Ravinia on a warm August night to capacity a good twenty years later seemed like a stretch. But with the scent of various chiantis and steaming wheels of brie wafting through the hot breeze and to the delight of a near sold out crowd they did it handily. A big clue as to where the night was headed could be gleaned from the inclusion of The Tubes’ novelty song “Proud to be an American” in the overture music. As Fee Waybill crooned “I’m proud to be an American and I wi-ish-ish every other kid could be one,” it was clear, at least for this night,  Ravinia belonged to the smart asses.

The opener, Boston trio Tall Heights,  took their swirling angelic harmonies in unexpected directions. Paul Wright on cello and Tim Harrington on guitar sound like Catholic choirboys but, with the aid of drummer Paul Dumas and a clutch of meaty songs they projected a sound that was anything but “sweet baby wimp.” “Hell to Pay” was delivered with a side of muscular bile while “Not Like it Was”, with an assist from Cake trumpeter Vince DiFiore, featured cascading harmonies and a wistful tone. “Spirit Cold” was elegiac and lyrical while building tension towards a cliff hanger climax while the capper, “The Deep End” ended with Wright and Harrington jamming for the close.

A giddy  Folds promptly appeared (Tall Heights served as his backing band) and started misbehaving  from the start. His opener, “Annie Waits,” was punctuated with him popping up and down like a bunny for a response from the audience at the chorus. After a breezy “Battle of Who Could Care Less,” Folds threw goofiness to the wind with an instrumental tv theme song he claims he was inspired to write upon his return to Ravinia. “The Mean Streets of Highland Park” sounded exactly like what he said it was and it heralded the end of Folds’ good natured try at comedy.

The rest of his set had more of an emphasis on dramatic readings and muscular rocking out and it was exactly what one could expect from the artistic advisor to The National Symphony Orchestra at The Kennedy Center in Washington D.C.. “You Don’t Know Me” rang with a surprisingly cagy rage while “Do It Anyway” was powered like a sports arena anthem. “Fred Jones” was rather low key, and the presence of  McCrea who joined Folds for a duet of the song didn’t seem to add to it. Still, “Zak and Sara” and “Rockin’ the Suburbs” ended Folds’ segment with a satisfying punch.

If Folds got more involved and serious as his set went on, McCrea seemed to be on his own little planet for Cake’s entire set. Coming out to the theme song from the film Rocky (“Gonna Fly Now”), McCrea scooted through “Frank Sinatra” and “Sheep Go to Heaven” with a shuffling ease that gave the impression that he really didn’t give a damn. That notion was put to rest when a fan screamed out, “I LOVE YOU!!!” to which McCrea shot back, “No you don’t, there is no such thing as love…it’s all narcisim.” All of this was really an introduction to McCrea’s patented deadpan humor, and though I was familiar with it in small doses, I had no idea of his skill at ladling it on for ninety minutes. As a master of subtle wit, the man has a talent for almost saying what you would think he would say and then defusing it with a bit of left field snark.

The melancholic break up song “Mexico” was dedicated to the five Mexican individuals that McCrea counted in the audience from the stage and just as soon as he finished singing it he upended the tone by cracking, “Maybe this song is about child welfare…” If his jab at President Trump and the whole Isis mess didn’t have the ring of a bloody jab, the rollicking “Sick of You” drove the point home. While continuing the tradition of Cake giving away a potted tree during performances, McCrea warned the then un-named recipient that the band would be checking up on the condition of said tree in the future before relating a mildly amusing aside about an “evil British woman” who won and then vanished off the face of the earth.

If McCrea seemed to get carried away with his own brand of snark, he saved himself and the evening with “Perhaps, Perhaps, Perhaps” which had a ramshackle charm reminiscent of Wimpy, the hamburger loving glutton in the old Popeye comic strip. Then came the tidy finish…the straight up pop nugget “Walk On By” followed by the avuncular “Never There.” “Never There” I found to be a distinctly appropriate finish because its the clearest example where Cake’s components come together into a heady mix. Between DiFiore’s clean and energetic horn lines, McCallum and Roper’s percolating rhythms, McCurdy’s subtle fret work, and McCrea’s discombobulated inflection-less “singing (this guy makes Wednesday Addams seem like a Vegas show girl) its hard to deny that Cake has something far more then subtle is distinctive, ironic, and unique.

“Battle of Who Could Care Less”

“The Mean Streets of Highland Park”

“Sheep Got to Heaven”

Cake and Ben Folds @ Ravinia The Riot Fest Chicago 2018 Schedule Is Out. Time To Line Up Your Weekend Madness.