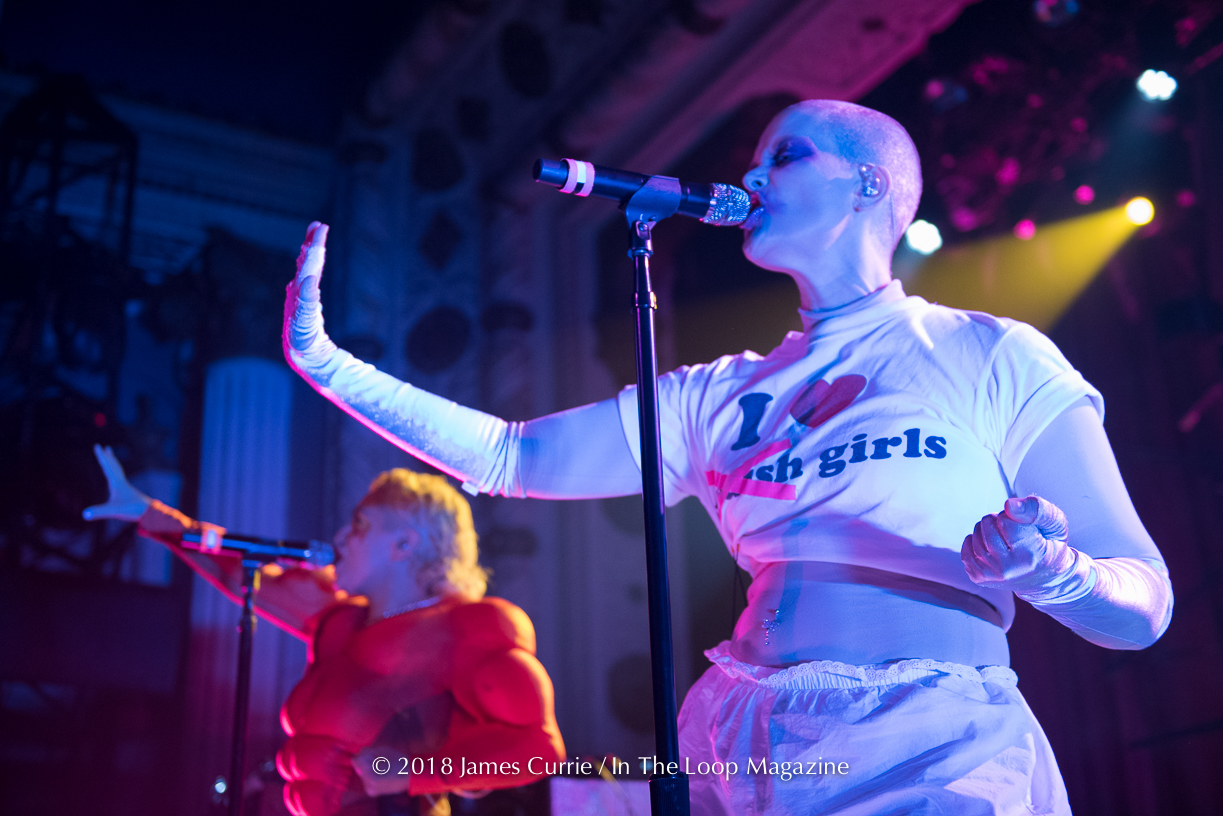 (Editors Note: Tegh was not the original reviewer lined up for this performance. He graciously stepped in to cover it knowing nothing at all about the band just hours before hand. Because of his diverse music background and adventurous spirit, he took on the challenge and Fever Ray gained a new fan.)

As someone who enjoys listening to music, there are many diamonds in the rough I encounter, bands that seemingly fall into the oblivion of time and reappear in the public consciousness thanks to the internet and those that command a loyal following wherever they go, but somehow fly under one’s radar regardless. It is in this latter camp to which the famed Swedish band Fever Ray belongs. In fact, I feel sheepish in saying that I only heard of this band yesterday. Even more so, considering I was to cover their set at the Metro that night in what was one of two sold out shows supporting their new album Plunge.

My feeling about being a fish out of water deepened upon arriving at the Metro yesterday evening upon seeing the size of the crowd and how everybody there were fans of the band, eager to see them after an almost eight-year absence from touring in the States. Bearing these handicaps in mind though, I walked away from their show completely impressed and amazed at their set, which was a fusion of electronic, afro-beat rhythms, a dazzling light show and the spirited performance from all the members of Fever Ray.

The opening act, Bunny Michael, was in the midst of her set. Situating myself on the second floor, I watched the artist deliver I think, the strangest set I had ever seen. Dressed in a gaudy and frilly yellow dress, she rapped and cackled like a hysterical hyena over, a karaoke machine playing her music. There was no backing band except for her and what looked like a stuffed animal on a string that she whirled around and whipped against the stage floor. Her rapping was average, and her onstage presence was unwieldy, in the sense that she would descend into hysterical fits of rapping but then deliver some interesting spoken word verses. However polarizing her set was, her last song “Lazarus”, proved to be a standout song, with its heavy beats,  oriental instrumentation and the slow, tough delivery of her rap.

After Michael’s performance, everyone waited in hushed anticipation for the moment when Fever Ray entered the stage. When the stage lights began to shine and whirl, everyone inside the Metro roared with approval. Soon, a woman appeared dressed in a green costume covered in leaves and flowers that looked like the villain Poison Ivy from Batman entered, curtsied to the audience and took her place at the drums. Soon other members arrived, all dressed in strange costumes. The keyboardist, for instance, was dressed in a striking black leather outfit while the singers were even more outlandish. One member was dressed in a muscle-bound costume, another was dressed in a blue epaulette-ed costume reminiscent of Sub-Zero from Mortal Kombat. Finally, Karin Dreijer (The Knife) (now sporting a bald look) was dressed in a white, rolled up t-shirt that stated “I Love Swedish Girls” with Swedish crossed out, pantaloon shorts with laced up leggings and with makeup like a deranged clown. The shock and awe value was in full effect.

Right from there the show began with the song “A Part of Us” from Plunge, an electro-pop jam that had everybody moving and kept on all through the set. The strobe lights and the afrobeat, electronic melodies were all on point and although, I had no idea what songs were playing, I became fully immersed in their performance. While the three singers gyrated, danced, and grinded against each other, I believe the real heart of the band were the two drummers and keyboardist. The three of them all fused these rich electro-pop layers on afro-latin beats reminiscent of the sound of Fela Kuti or Talking Heads circa “Remain in Light”, however with a clear alternative feminist twist. Songs like “Mustn’t Hurry” and “A Part of Us” all were buoyed this rich arrangement and even more so by the energetic and the overtly sexual performances by Dreijer and her fellow singers. In fact, there was one moment when the three of them formed an Eiffel Tower with one of the dancers eagerly pantomiming sexual motions in front of us. And this was an all ages show. Can’t imaging what the “After hours” performance is like.

Regardless of the crash sex-ed course we got, Fever Ray’s set was rightly brilliant in its onstage daring and in the quality of the music. The rollicking electro-afrobeat rhythms were complemented by softly epic songs, such as “Red Trails” and “Keep the Streets Empty” off of their debut Fever Ray. “Red Trails” in particular, stood out not for its distinctly Swedish accordion, but for the ominous red lighting that shone over Dreijer and another singer as they sang about the longing for a past destructive relationship. The overpowering emotion along with the somber accordion fed into a distinct sense of dread and discomfort that I found strangely captivating. The other song “Keep the Streets Empty”, was another somber, lumbering march about loneliness, that I believe was the best song in the set. Accompanied by booming, minimalist drums, the tale about loneliness was a welcome departure from those usual slow marches that I had heard in past shows such as “They Don’t Own Me” by Richard Ashcroft and “Do You Know What I Mean?” at the Liam Gallagher show. But while those songs crescendoed towards the end, “Streets Empty” never reached those heights, instead opting for a diminuendo finish, that was an interesting twist to how those kinds of songs usually end up.

The encore brought us the dark and haunting theme song from the television show, Vikings, “If I Had A Heart” and the upbeat dance track “Mama’s Hand”.

While there weren’t any lows during Fever Ray’s set, the band seemed as if they were rushing through their set at points. When it was over, I didn’t feel as if the show was actually finished. I was looking for more. I was still lingering, waiting for the band to reappear, only to be firmly ushered out to prepare for the late show that would happen in an hour. But regardless of how perfunctory the show was, everyone in the crowd walked away happy and satisfied after seeing one of the most incendiary bands currently touring the country. The line outside for the second show was another indication that there are many more fans in for a treat. Fans asking other fans “Well, how was it?”

In the end, I’m glad I took a gamble by attending the show. As stated, I had just learned of them hours before. At first, I believed the feminist overtones would keep me from enjoying their performance. Instead, the band entered their set with energy and in all honesty were brilliant. While, their quest to bring a feminist sensibility to music is welcome and admirable, the musicianship and talent of Fever Ray was amazing. Gender politics aside, Fever Ray is a phenomenal worldly electro-pop band and their lively, energetic show is something that no music fan should miss. They seem like an art school band with a purpose and direction that works.

For more on Fever Ray, their latest album and current tour, click here