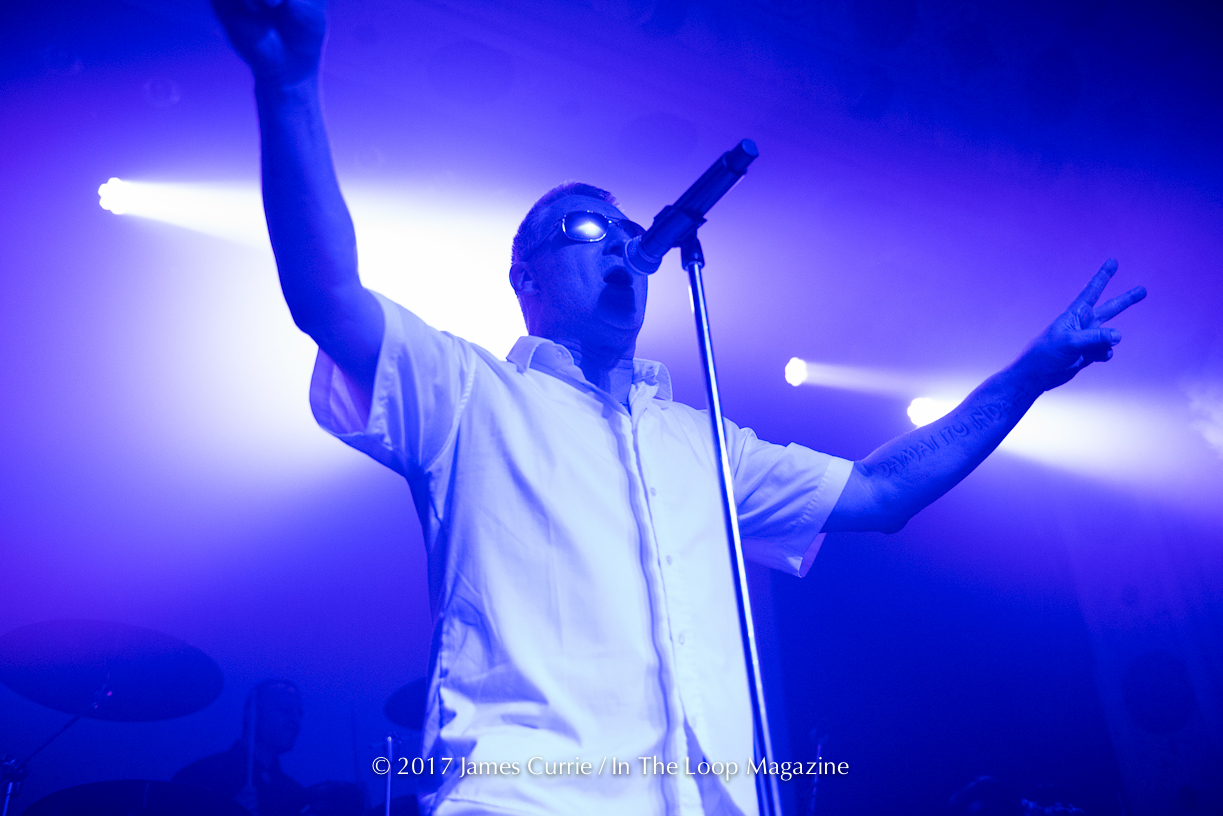 On a cold wet night yesterday, I stood in line waiting for the Metro to open up for the Revolting Cocks show. I had heard nothing from or about the Cocks except that RevCo, as they are known, were an industrial/techno super-group that included the colossus of the genre, Al Jourgensen from Ministry along with other notable European industrial artists. Although not a particular fan of the Industrial-electro-techno genre, I could not pass up the opportunity to see an iconic band, especially one so revered by many Chicagoans as the Revolting Cocks via Wax Trax Records! and the prospect of seeing Jourgensen onstage. Furthermore, I didn’t appreciate how great the band’s reputation was until I asked a coworker of mine, a guy who steered me towards the light of the Pixies and Butthole Surfers, “Hey, have you heard of a band called RevCo?”

“You mean the Revolting Cocks?!” He exclaimed and then laid down everything I needed to know about the band, of Richard 23, Paul Barker, Jorgensen, and how if it wasn’t for Ministry or RevCo, I would not see the likes of Nine Inch Nails and everything afterwards. Shored up with some knowledge and additional input from my editor, I hopped on the Red Line and found myself amid a crowd of mean-looking forty-and-fifty somethings all dressed in black, tatted up with grungy clothes sporting familiar names like “Ministry”, “KMFDM”, and “The Jesus and Mary Chain”. They all talked about how great the Chicago scene was in the eighties, with derelict venues hosting riotous DIY punk shows and of course, the greatness of Wax Trax records, the famed Chicago label that I unfortunately, was as unfamiliar with as the Revolting Cocks. When I made my way into the Metro, many people told me what a great show this was going to be and as it began, nothing prepared me for the musical onslaught I would hear when Frontline Assembly and the Revolting Cocks took the stage.

The show opened with a performance from the band Cubanate. The English trio lit the stage with their angry, heavy metal-style take on the industrial sound accompanied by a number of searing visuals in the background. As I watched everything from the balcony, the crowd went nuts, with several people trying to start a mosh pit once the boom of the drums hit and the singer snarled, roared, and growled his way across the stage like a lion. However as their set went on, their rough and messy sound all blended into one mass of booming drums and unintelligible growls, therefore making it tough for me to pick a song I enjoyed. Luckily, “Junky” proved to be the fix I needed, since the infectious chorus meshed well with the redundant drums and has since become a song to which I often return. Essentially, Cubanate began the show well, readying everyone in the crowd for the chaos that would play out when Frontline Assembly took the stage.

Their set over, I left my perch at the balcony and made my way into the crowd below since I felt I was missing out on the full brunt of the sound when they played. Weaseling my way to the stage, it was not long before Frontline Assembly emerged in a blinding haze of purple light. As the music swelled, the crowd roared and several people pushed each other around anticipating the mosh pit that would soon erupt. Sporting the strangest haircut I’ve ever seen, a tuft of blond hair that looked like a set of aborted dreadlocks, the singer Bill Leeb walked onstage and unleashed one of the best sets I’ve seen and heard at the Metro. Although looking more mature than most rockers today, he rocked and swaggered across the stage like a panther. He played the drums one moment during the instrumental interludes and then would start rapping or singing at that cool, leisurely tempo over a relentless and hypnotic techno march that had everybody dancing and quite literally brought the house down. People hurled themselves into each other with increasing fury, some crowd surfed across the audience, and the rest, like myself, danced to Frontline’s thunderous, apocalyptic funk. As this was going on, one guy even crouched down and lit up a joint. It was mayhem in the best way.

After Frontline Assembly, came the Revolting Cocks sans Al Jourgensen to my dismay. However, instead of Jourgensen, Richard 23 took the stage along with Paul Barker, a Ministry alumnus and the bassist for the band. Bluntly, the Cocks’ set began uneasily and was hampered by the fact that Richard 23 danced around like a drunk uncle at a wedding across the stage. The music first set from the group’s debut album Big Sexy Land, was a stark contrast to Frontline Assembly’s volcanic set. The music was indeed good, with a similar danceable and funky beat, but from the nonplussed faces around me and the lack of moshing, it was clear the audience was not feeling the music it did before. As Richard 23 began singing “Union Carbide” things began to improve especially with Barker’s chugging bass melody. Suddenly then, Richard 23 left the stage, telling everyone to go home because the show was over. Just as I was about to do so, I noticed that the rest of the band remained and so did the audience. Before I could understand what was going on, the music began again and a different singer emerged from the stage who was tall and lanky with a cowboy hat and a pink tank top. At first I thought it was Bill Leeb, letting his hair down, but in fact it was Chris Connelly, another veteran member of the band and currently the front man of the local Bowie tribute, Sons of the Silent Age.

Once Connelly got onstage, the whole band pulled off the most dramatic and only volte face I’ve seen in my life. The uneasiness at the beginning gave way to confidence, embodied by Connelly’s lively stage presence. When the band burst forth with their take on the cheesy eighties song “Let’s Get Physical”, the greatest and only version of the song that should exist, the sound was relentless, the bass thundered, the drums boomed, and the crowd moshed again. It was all brilliant, and surpassed Frontline’s set completely. While the two bands before were mired in dark, heavy, and brooding melodies, the Cocks let loose with their exuberant, tongue-in-cheek character even with the devastating drums and sampled beats, commonplace in the genre. From Connelly’s leg of the Cocks’ set, “Let’s Get Physical” was great, but “Cracking Up” a song from the album Linger Fickin’ Good, was the best song from their set. The frenetic pace and punchy, danceable beat of the song buoyed by Jason Novak’s great guitar skills brought their set to a blistering climax. Finally, the band closed their set with a 70’s cover of Rod Stewart’s “Da Ya Think I’m Sexy” during which Richard 23 returned to the stage wearing a flag for the Belgian national soccer team. All the members of the band danced across the stage as everyone in the audience sang along to the industrial send-up of Rod Stewart.

For photos from the Revolting Cocks show at Metro Chicago, click here

For a video sample of Revolting Cocks live in Chicago at the Metro, click here