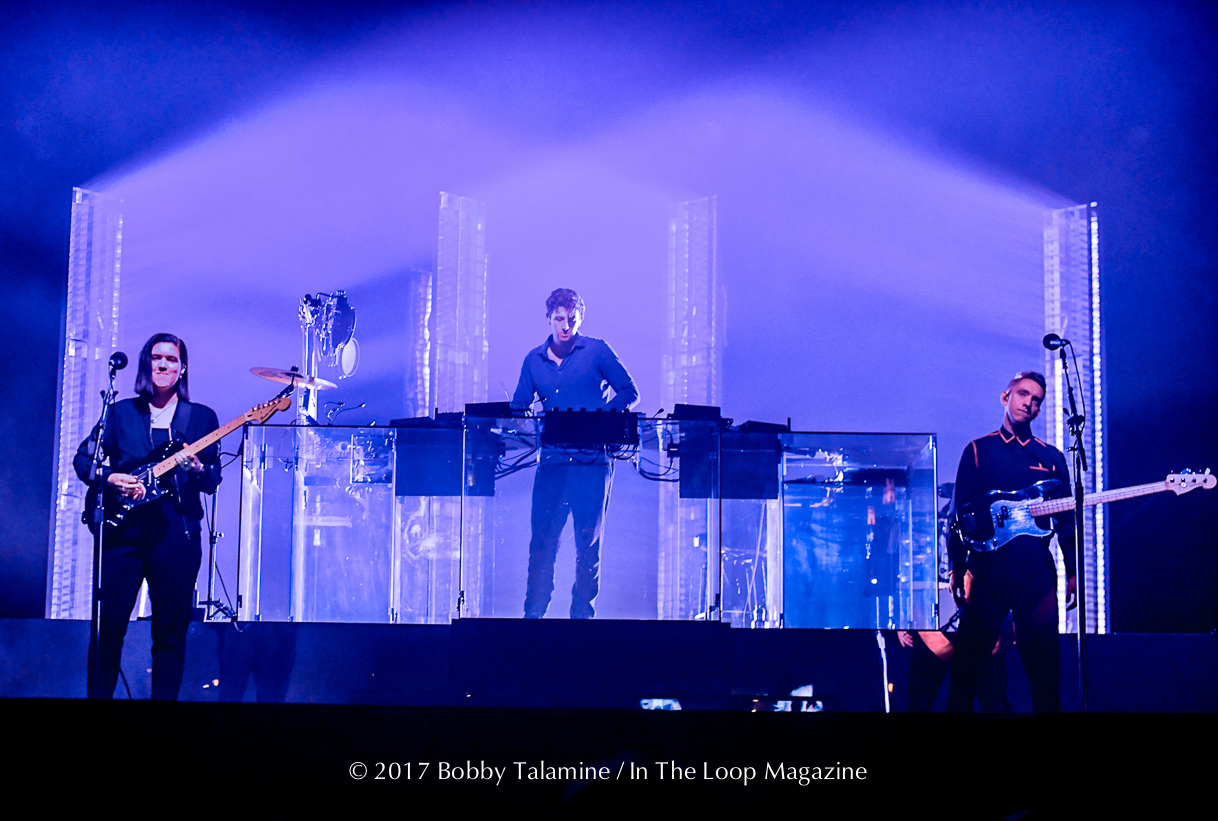 The xx: a vital blend of electronic balladry and sophisticated pop all molded into one. Since this is their second foray at the Aragon Ballroom, some three years ago, you have to give them credit for building on their sound and production.

Touring on their third album released back in January- “I See You”, Romy Madley Croft (Guitar & Vocals), Oliver Sim (Bass & Vocals), and Jamie xx (Keyboards & Producer), have expanded on their minimalist ’80’s alternative sounds that would prove to have a holding power on the past ten years of their existence. Partly it’s Jamie’s identifiable interest in pulsing beats and rhythms, and also equally it’s the interaction between Sim and Croft vocally sharing the songs.

The stage was an intricate set up of vertical mirrored paneled walls that rotated and spun vibrant and sometimes blinding colors depending on the mood of each song. Jamie xx stayed behind a clear plexiglass desk which housed his vast array of electronics and synths, along with various forms of percussion. Romy and Oliver were front and center, on guitar and bass, above a clear plexiglass floor that also held vibrant colors (mostly blue to set the mood) as they roamed about the stage.

The xx live pack a massive amount of drama and emotion into their subtle and elusively simple songs. The trio specialize in restraint, bleeding easily thru indie guitar pop, chill, and slowbeat dance songs that are sleek and all so eerily cool as well as captivating. Between the two vocalists, Oliver and Romy clearly know how to build thick tension out of such intimacy, doing more with vocal tradeoffs that are not meant to escalate an argument, but to describe awkward troubles ever present with no clear answers in the negotiations. Boy does it work time and again. Nothing is forced between the two. It’s captivating to behold, both live and on record.

I simply don’t know of a duo currently out today who have this command of shared vocal, where it doesn’t escalate into pomposity or technical virtuosity, and one- upmanship. A lot of established artists in all genres of music should clearly take out pen and paper, and patiently listen and dig into the true definition of male and female vocal which The xx has in spades. Jamie xx has upped his pop pageantry with more elusive slow billed ballads, breathing a hunger into the quiet and seductive beats.

The first single off their new album “On Hold” recalls early Human League with its slow burn boy- girl back and forth, each holding down their drawn lines in the sand as if it’s a subtle late night battle cry. Live, the songs are something to behold, and the Chicago audience is hopelessly reciting every word to every song. It’s beautiful to behold live and in person, because The xx clearly bring the sophisticated mood both musically and visually, and the result is as haunting as ever.

Opener was Sampha- a British singer – songwriter who has a subtle and soulful side to his songs that speaks well beyond his years. Trust me: you’ll hear more from this dude soon.