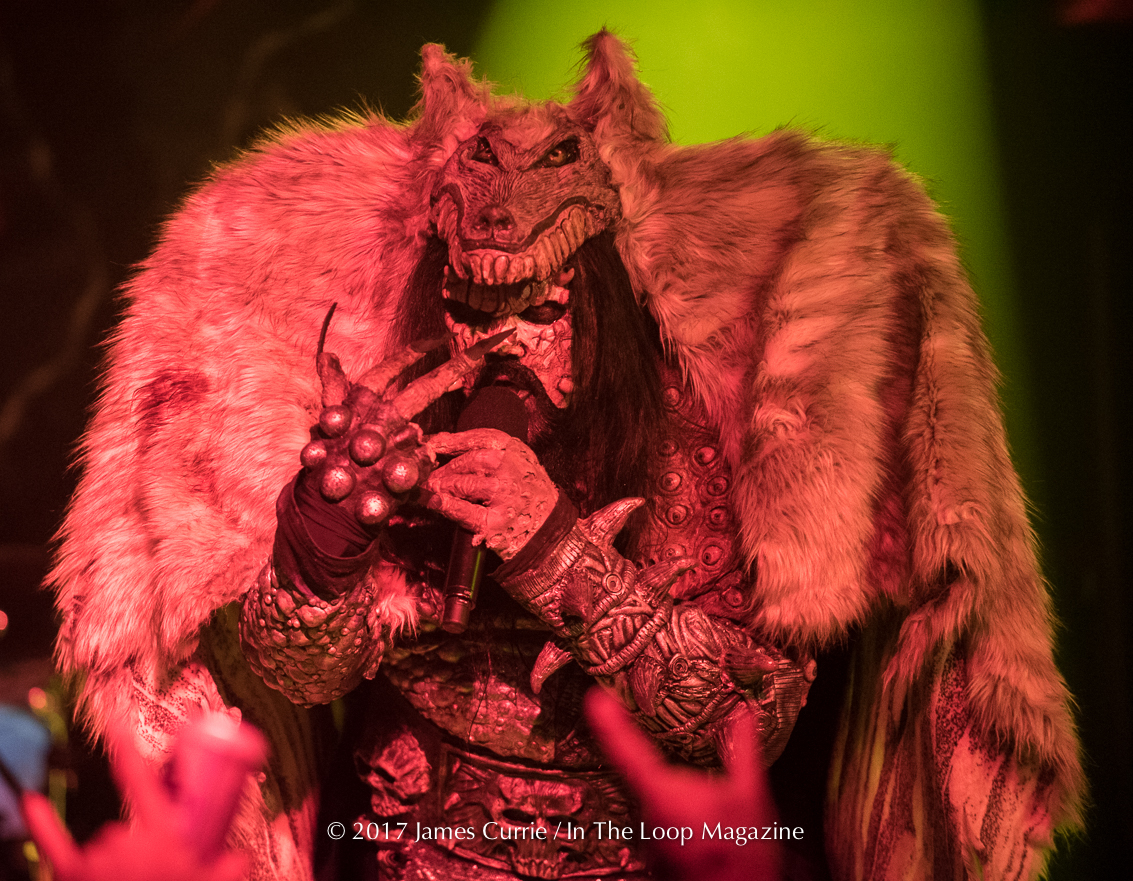 When I heard that Lordi was coming to Chicago I knew this was definitely a concert I did not want to miss. I heard about Lordi a couple of years ago and I wish I had a heard about them earlier, because I would have seen them sooner. Watching their videos and getting myself familiar with their music I realized they must put a lot of effort into their live shows. After their performance at Reggie’s I was obviously right.

This Finnish heavy metal band was formed in 1992 by Mr. Lordi; the band’s lead singer, songwriter and costume maker. Rounding out the mystical monster group is Amen on guitar, OX on bass, Hella on keyboards and Mana on drums. Before the show started, I was wondering how the band would fit on the small stage at Reggie’s with their elaborate costumes and setup. It was close quarters, but it made for a more intimate night where the band was nearly on top of the crowd in the front row.

This tour is in support of their latest album ‘Monstereophonic: Theaterror Vs. Demonarchy’ that came out in September of last year. The crowd was instantly into the show when the lights dimmed and their Skeletor mascot introduced the band and kicked into “Let’s Go Slaughter He-Man”. Most of the crowd were singing along while the rest of them were moving around and clapping following Mr. Lordi’s lead. The band kept the crowd’s attention as they jumped into “Babez For Breakfast”, definitely a favorite. There were a couple of skits during their set. One consisted of a nun trying to interrupt OX from playing his bass solo, but ended up getting choked and her stomach slashed open. The other skit was a pope character bearing a cross to try and conquer the great Mr. Lordi during “Down With The Devil”. The crowd watched on and cheered when the pope impersonator was defeated and quickly left the stage.

Breaking up the night also included solos from Mana and Hella, two great musicians in their own right who kept us entertained while giving their fellow bandmates a break. Another crowd favorite, “Hug You Hardcore”, got the crowd moving as they were chanting along with their fists in the air. The dedicated crowd wanted more and kept their screaming and chants of “Lordi…Lordi…Lordi” loud until the band reappeared for their 2-song encore. Lordi’s set ended on a high with the song “Would You Love A Monsterman”. Nearly the whole crowd was singing along as parts of the crowd were pumping their fists as others were clapping their hands above their heads. Lordi puts on a great performance and they have a great stage presence. Go see this show, because you will not be disappointed.

Mr. Lordi chanted during the encore getting the band back on stage.

For more on Lordi, including upcoming shows, click here

For photos from the Lordi show at Reggies, click here