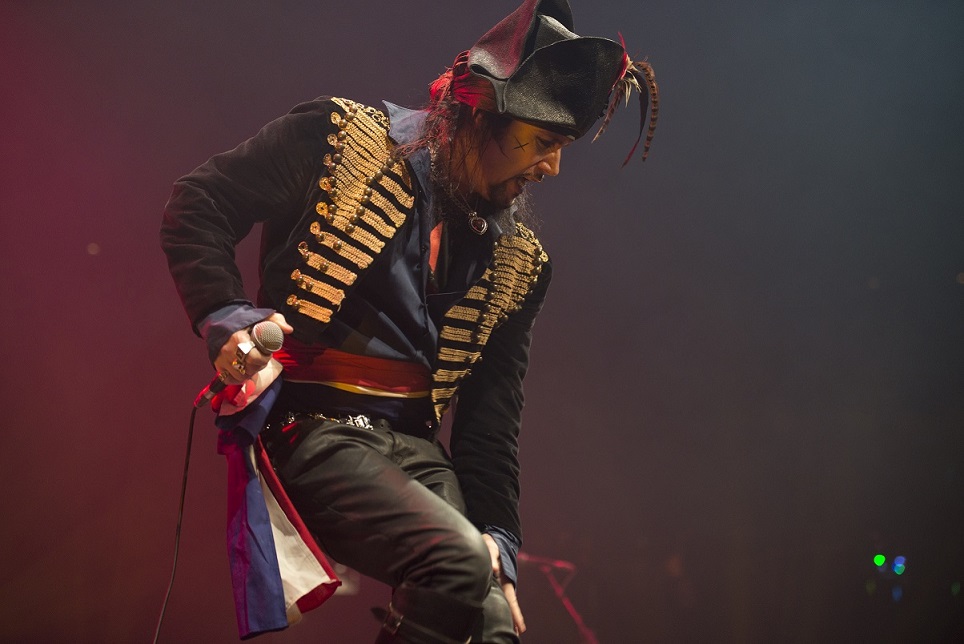 Last night, “Prince Charming” Adam Ant (62), played a sold out show at The Vic Theatre in Chicago. This show, as well as many on this tour, was sold out for some time and a welcoming event for all who attended. This was an emotionally charged performance by Ant and his band as his longtime guitarist and friend, Tom Edwards (41) passed just days ago.

This US tour dubbed, “Kings of the Wild Frontier Tour 2017″, just started January 23rd, in Washington, D.C. After a mere three days into the tour, tragedy struct. Guitarist and singer, Tom Edwards, died suddenly from apparent heart issues. A touching Facebook post about the tragedy was live just after: “On behalf of Adam and his band, we thank all of you for your best wishes and support during this most difficult time.” “Tom shared his musical gifts with the world and his spirit will live on forever.”

The band postponed everything for a few days to reflect, but soon went right back into it. A representative from the band said that Edwards wanted them to continue. The best way for them to deal with this tragedy was to power through it. But you could tell from Ant’s voice and mannerisms, it wasn’t easy. This was his friend after all and still fresh in his mind.

Adam Ant and Co. took the stage right at 9PM. As the tour was billed, the kicked right into the first track off “Kings of the Wild Frontier”, “Dog Eat Dog”. Adam Ant’s band now comprised of Ant, Joe Holweger (who’s bass guitar had the word, “Tommy” scribed into it, Andy Woodard, Will Crewdson and Jola performed the album flawlessly.

Even though Ant has been a performing musician for 40 years, he really seems on top of his game of late. Even more so than just a few years back when he last came through town. Ant, who got his musical career kickstarted from a movie called, Jubilee (1978) with his original new wave / glam band, Adam and The Ants, skyrocketed to fame through the early 80’s with the MTV movement and a string of pop hits. This tour really showcasing his talent as the “New Romantic Pop Punk” pioneer he’s become. The actor, director, producer and musician is more focused than ever. His vocals on point. His dance moves and stage demeanor completely fluid. His current backing band all in complete sync with each other.

The dual drummer combination of Jola and Woodward bring that tribal “Burundi Beat” front and center. It’s full, rich and encompasses the native rhythm sound that is Adam Ant. Hearing it live in The Vic, really made this live experience even better than imagined. It’s something you just can’t fully appreciate until hearing live and in person in a venue like this.

Ant’s appearance is equally impressive as he dawned his trademarked romantic pirate captain look. He’s still in great physical form. A challenge for most to maintain, he does almost effortlessly. The look complete with sequined lined jacket, draping belts, black leather trousers and captain kid hat. He even still has the familiar facial markings under his primed goatee bringing the pirate appearance to completion.

After an almost 2 hour performance, the night was complete. “Kings of the Wild Frontier” through the hits kept the fans on their feet the entire time. It was a performance that Tom Edwards (who passed way to early) would have been proud of. His bandmates did it justice. Adam Ant still proves relevant today as much, if not more, than his beginnings marking him a true artist who stands the tests of time.

Setlist for Adam Ant live in Chicago at The Vic: