An Evening With Maynard James Keenan: A Perfect Union of Contrary Things Seminar 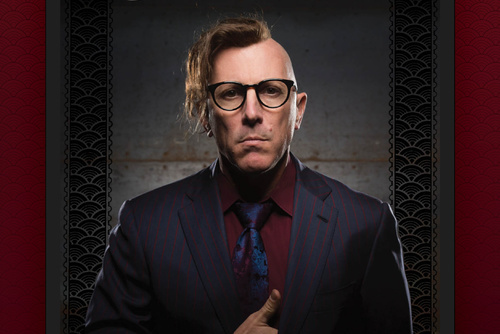 “When you come to a crossroads, you can either be crippled by doubt, or you can start down an inspirational new path. You have to put one foot in front of the other and remind yourself that there are no wrong choices.”

That quote instantly stood out to me and goes to show Maynard’s drive and inspiration that he developed growing up and still possesses to this day. Maynard James Keenan might be best known as the lead singer of Tool, A Perfect Circle, Pusicfer and a winemaker. What people might not know about him is that he is also an actor, a Private First Class, a comedian, an athlete, an entrepreneur, a family man and I believe a great inspiration to us all.

MJK’s new adventure down his next path is his authorized biography A Perfect Union of Contrary Things that he co-authored with Sarah Jensen; a friend of his for the past 30 years. I was in attendance for the first of two promotional readings at Thalia Hall. The night started off with being handed a copy of the book and a Puscifer CD as upon entrance into the music hall. The greatest hits of KISS songs were being played throughout the venue as people were taking their seats for this intimate presentation. The houselights dimmed and the music switched to Led Zeppelin’s hit “Kashmir”. When the song ended, Amanda Danielson, our moderator for the evening, took to the podium and greeted the crowd. Amanda, while being a Master Sommelier, is the owner of Trattoria Stella and The Franklin, two restaurants in Traverse City, Michigan. She first met MJK when she reviewed his wines with her unequivocal acumen. She gave a little background on their relationship and introduced the man of the hour. As MJK walked onto the stage, sharply dressed in a 3-piece suit, the crowd rose to their feet giving him a standing ovation included with yells of excitement and applause.

The night was broken up into four readings that Amanda pulled from the book and MJK elaborated about into further detail at the podium while an audio/visual was presented on the screen next to him. In between the readings Amanda and MJK sat at a table and dived a little deeper into the book as we looked on. One of the things that was striking to me was when Amanda pointed out that MJK has trusted the path he’s followed his whole life relying on three things: his head, his heart and his gut. We all go through the “tough times” in life, but if we believe in what we are doing is going in a positive direction we should not waver from it. After the readings concluded it was time for the question and answer portion of the night. The audience submitted their questions online and if the question was selected that audience member got to ask it at the show. At the end of the night, MJK and Amanda thanked the sold out crowd for coming and we were delighted with a video for the song “Galileo” from the Money Shot album.

This was truly an insightful and inspirational night. I liked learning more about MJK and the many facets of his life. I know the book is going to hold up and be just as great as the night turned out to be. If you have the chance to catch one of the remaining readings, do so it was well worth it.

For more on Maynard James Keenon, including other dates on this tour, click here