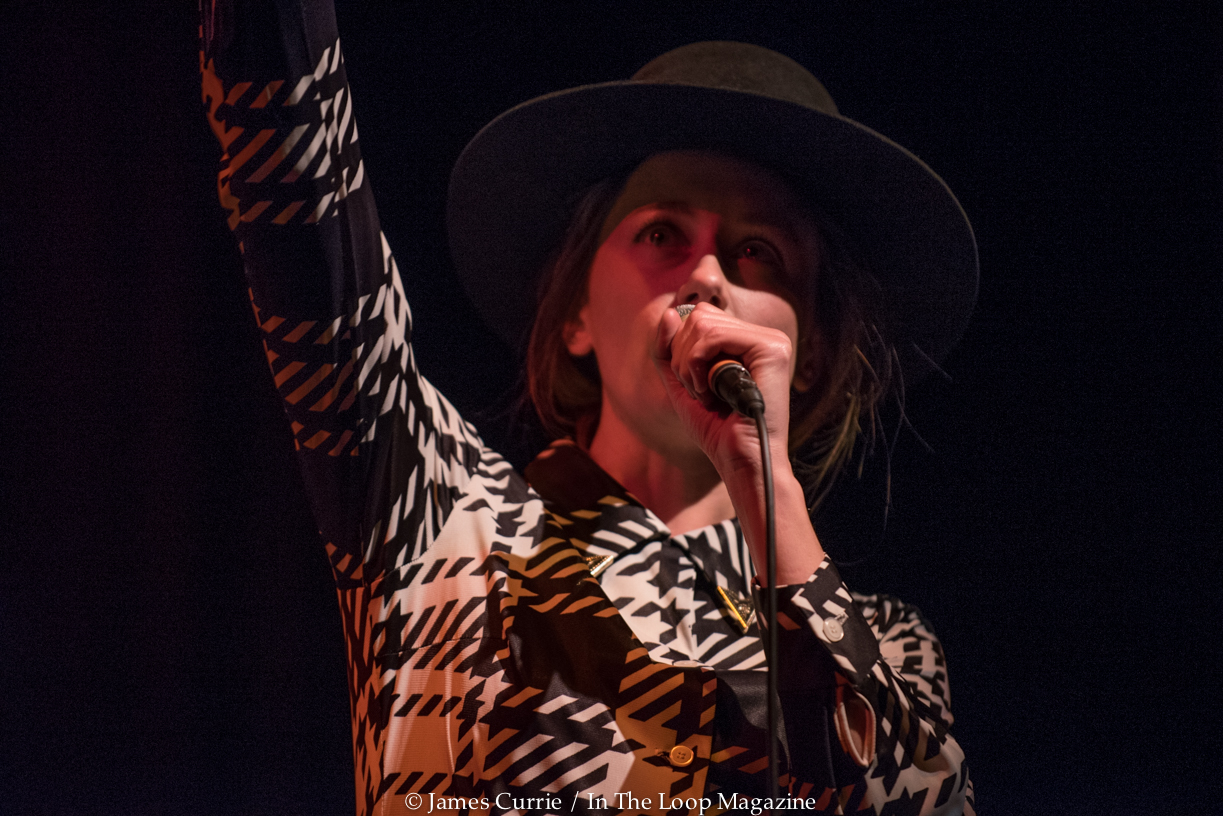 Houston born, Georgia raised, Nashville based, American musician Lera Lynn comes back to Chicago to play The Old Town School of Folk Music. If you don’t know about “Old Town”, it’s a small, intimate setting to see a performing artists. The venue only hold about 400 people and there’s not a bad seat in the house. The True Detective star easily filled auditorium of admiring fans without qualm. This was the last stop on her 2016 Resistor Tour.

Opening the night was the Atlanta based signer/songwriter Anthony Aparo whose sound and style reminded me of Swedish folk artist, José Gabriel González. Aparo’s solo performance of acoustic songs set the tone for the room that night. He strummed his 6-string taped up guitar while wearing a sleeveless jean jacket with a Maytag patch on the front (This made an impression on me as I lived in a town that Maytag was once their main job source before being moved to Mexico and thousands of people lost their jobs but that’s another story). Aparo sang his passionate moving songs and talked to the growing audience throughout his 30 minute spotlight. He even played a new one that he said he was nervous to play but wanted to share called, “It’s OK” and it was better than OK. After his performance he made mention that he had his music was for sale in the lobby and invited the crowd to “feel free to help him sell out as he didn’t want to take anything home”. His tunes were for sale on USB memory sticks and cassette tapes complete with a Sony Walkman with headphones available to listen to before hand.

When it came time for the main act Lera Lynn to come out, the audience had swelled in size now filling the house by more than double. She and her band which now consists of Joshua Grange on Lead Guitar, Robby Handley on Bass and Tommy Perkinson on Drums entered stage left, grabbed their gear and greeted the fans. She said she was a little nervous about playing the hall (since it was a school of music), saying, “I was hoping you guys wouldn’t say, she’s terrible” but soon fell at ease as the audience welcomed her with open arms and ears.

She kicked off her set with “A Church In Ruins” – from True Detective Soundtrack and “Lying In The Sun” – a track off her 2014 EP of the same name. After each song it became clear to Ms Lynn that this was a special venue and audience. There was an almost deafening silence between songs. You could literally hear a pin drop. She helped break the tension with funny stories, political comments, pop culture references and song descriptions among other things at one point saying, “It’s been a while since we’ve played for an audience this rude.” the audience chuckled and one member responded back with, “At least we took down the chicken wire!”. The banter was on and continued in good spirits throughout the night.

The show continued with tracks from her first album, EP’s and new releases. One song not even out yet. During another break in the set, Lynn breathed a sigh of relief into another awkward pause with a humorous tale of how she met her now longtime collaborator, Joshua. She said, “I met Josh at about four years ago opening for KD Lang.” then pause for tuning… before coming back and saying, “Oh sorry, Josh was in her band, I didn’t make that part very clear did I.” Josh then spoke up and said, “We met at the concession stand.” and Lynn came back with, “He buttered my popcorn.” before smiling from ear to ear and blushing and saying, “I’m sorry, I caught that right as it was coming out and it was too late to turn back.” This made for an extra special treat for the fans. We didn’t know we were in for a comedy routine as well.

Another taste of her humor came when she thanked Anthony Aparo for opening for her and talked about his music for sale. “He has USB sticks of his music for sale and cassette tapes”. The audience laughs. “When are they gonna start putting music on 8-tracks again. I remember those things… (murmurs under voice) That’s not true. I’m not that old.”

The stage itself for this performance was as sparse as the venue raucous. No back drop. No signage. No special lighting (besides the occasional fades). The only identifier on stage besides Lera and her band, was a backlit kick drum with her name on it. And don’t get me wrong, there was no place for anything else at this show. Everything worked very well together as played out, just not what you normally see and experience at a concert especially today when everything is sponsored by some mega corp or entity. It was a refreshing change.

During the middle of the show, Lynn did bring things down for a moment and made a heartfelt, moving tribute and dedication. Lynn said, “I think we’re all pretty devastated by (pause)…” While she was saying this, at least one fan though she was going to say something else funny like at other points during the show and let out a laugh and clap as if anticipating a Trump jab, but as we soon learn, she was giving a serious message about the recent passing of a great legend. Lynn continues with, “…The passing of Leonard Cohen… so in his honor…” She then sang an emotionally charged version of “Hallelujah” that seemed to catch the fans off guard. By the end of the performance, there wasn’t a dry eye in the house. This appears to be the only time Lera Lynn has done this live for an audience. We got yet another treat.

To catch that moving moment, click here to see the video.

Since this was the Resistor tour, we got to hear many cuts from the album live. This album is another step in Lynn’s evolution as an artist. You not only hear it in the recordings, but see it on stage. She’s developing into something very special. Resistor has brought out more levels Lera Lynn. We get her trademark dark folky-blues side, but much more. This record touches on rock n roll (Shape Shifter), indie (Ruby) and dare I say, pop (Drive)? This time we got full on rockin’ guitar solos and harmonizing jams. Lynn even pointed it out saying, “OK, who’s ready to rock now?!” as they tore into “Shape Shifter” and Drive” that mounted into a full on rock show.

Stand out songs live included Shape Shifter, Ruby and Drive for sure. These tracks are great on the record, but live brings out the real power and feel these songs were driven by. The mix of her sultry croon and dapper swoons with the power and charge of rock n roll made this a very entertaining live experience. It was a wild ride that left the house very satisfied.

At the end of the night, the band laid down their instruments and meet up front of the stage. Lynn gathered them together and thanked them for being on tour and playing with her. This was the final night and final performance for the Resister tour and they ended it with an a cappella tribute to Skeeter Davis called, “End of the World”. It was a final performance by all four members with the last words being, goodbye.

Lera Lynn is an artist that is going to be around for a long time. Its a shame this was the last of this tour. If you missed it, sorry, you missed a great one. It will be a real pleasure hearing and seeing her next venture. While we said goodbye to Lera Lynn this year, let’s hope 2017 brings her back on the road with even more incredible music and that incredible sense of humor.

For photos from the performance at The Old Town School of Folk Music, click here