Bringing Their Sonic Psychedelia To Chicago, My Bloody Valentine Throw Riviera Fans Into A Swirl Of Emotions 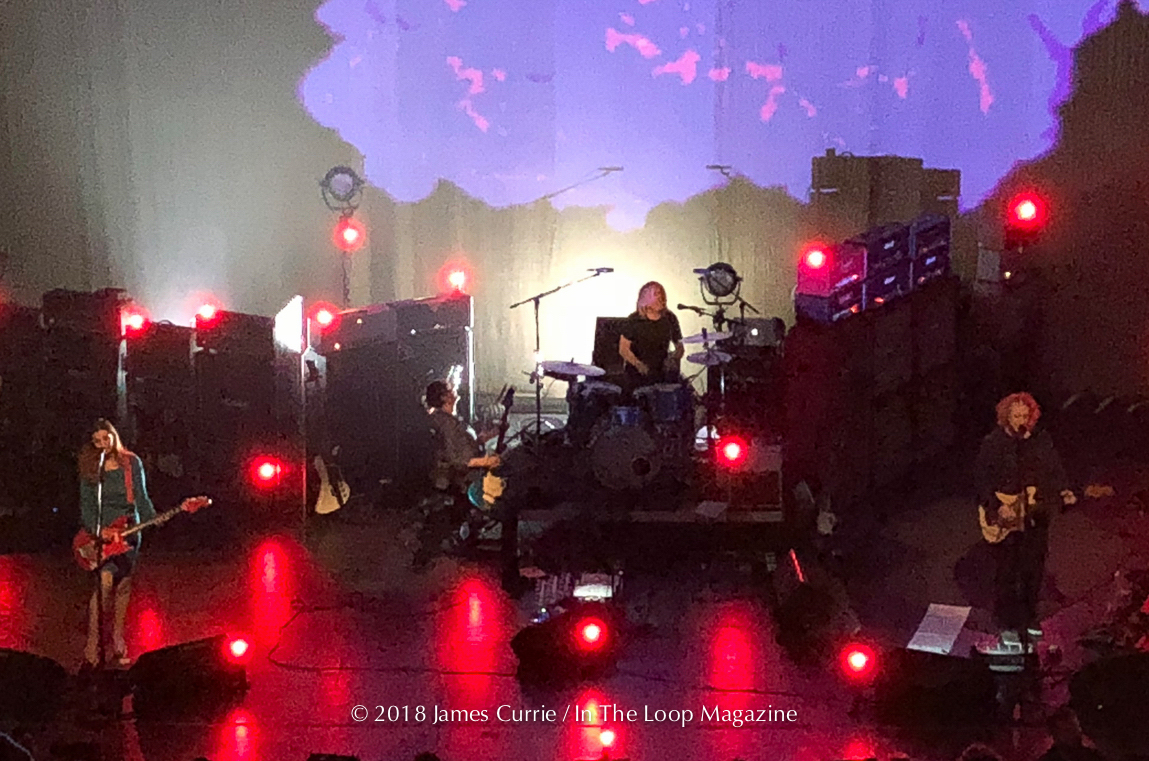 If you listened close enough, you might have heard the sound of 2,500 wishlists being checked off on Saturday at the Riviera Theater as shoegaze gods My Bloody Valentine brought their sonic psychedelia to Chicago, one of only a few stops on their North American tour.

Actually, scratch that. You wouldn’t have been able to hear anything outside of the wall of swirling, spacey sound created by Kevin Shields (guitar, vocals), Belinda Butcher (guitar, vocals), Debbie Googe (bass), Colm O Ciosoig (drums) and Jen Macro (keys). It was a sound unlike any other, breathlessly rendered pop songs from another dimension.

By this point, MBV’s sound is known even to many who might not know anything about the band. Having been cited as an influence on everyone from Nine Inch Nails to U2 and a guiding spirit in the alternative rock boom of the 1990s, Shields and company have refused to play by conventional rules, and while it’s cost them some mainstream attention, they’ve proven time and again that they don’t need it – they’re one of a very few bands who gets to do exactly what it wants to do, and damn anyone who doesn’t like it: their fans aren’t going anywhere.

Indeed, there’s no way that ‘disappointment’ could have been on anyone’s lips after Saturday’s show. Treating the audience to the bulk of Loveless (MBV’s ground-breaking 1991 album noted by many music publications, journalists, and fans as one of the greatest albums of all time), a smattering of older cuts (“Feed Me With Your Kiss,” “Nothing Much to Lose”), choice selections from their 2013 album mbv and even a couple of new songs, My Bloody Valentine left no stone unturned.

Much has been made of the legendary volume – a borderline dangerous mix of distortion and layering that you can just about feel in your chest – and the rumors, on that front, are true: from the second they hit the stage to “I Only Said” and transitioned seamlessly into “When You Sleep” (a chart-topper in some other parallel universe, if there’s any justice), it was clear that this was no mere band, this was an experience. A swirling panorama of colors and kaleidoscopic images spilled from the screens behind the stage and across the performers, giving everything an eerie, otherworldly quality, particularly on the hypnotic, mid-tempo drone of “Only Tomorrow” and “Come in Alone,” and by the time the band reached the end of the set, long-time followers knew what was coming. “You Made Me Realize,” the storied finish to MBV’s set as a general rule, has been known to hit lengths of nearly thirty minutes, with a middle break that can only be described as earth-shattering; while it only clocked at about nine minutes on this particular evening, the band reached a white-noise zenith of guitar effects and thrumming percussion that sustained for longer than one could stand it without ear plugs before dropping back into song suddenly; the musical equivalent of a cresting roller coaster. (Anyone not wearing ear plugs probably still has ringing, as we speak.)

A man of few words, Shields merely said hello at the start and thanked the crowd for coming at the end. The massive bank of effects pedals surrounding him did most of the talking, and that was fine – My Bloody Valentine feel less like a band than the human manifestation of synesthesia, and Saturday’s show was the stuff of blissed-out dreams for fans who had waited upward of twenty-five years for the chance.