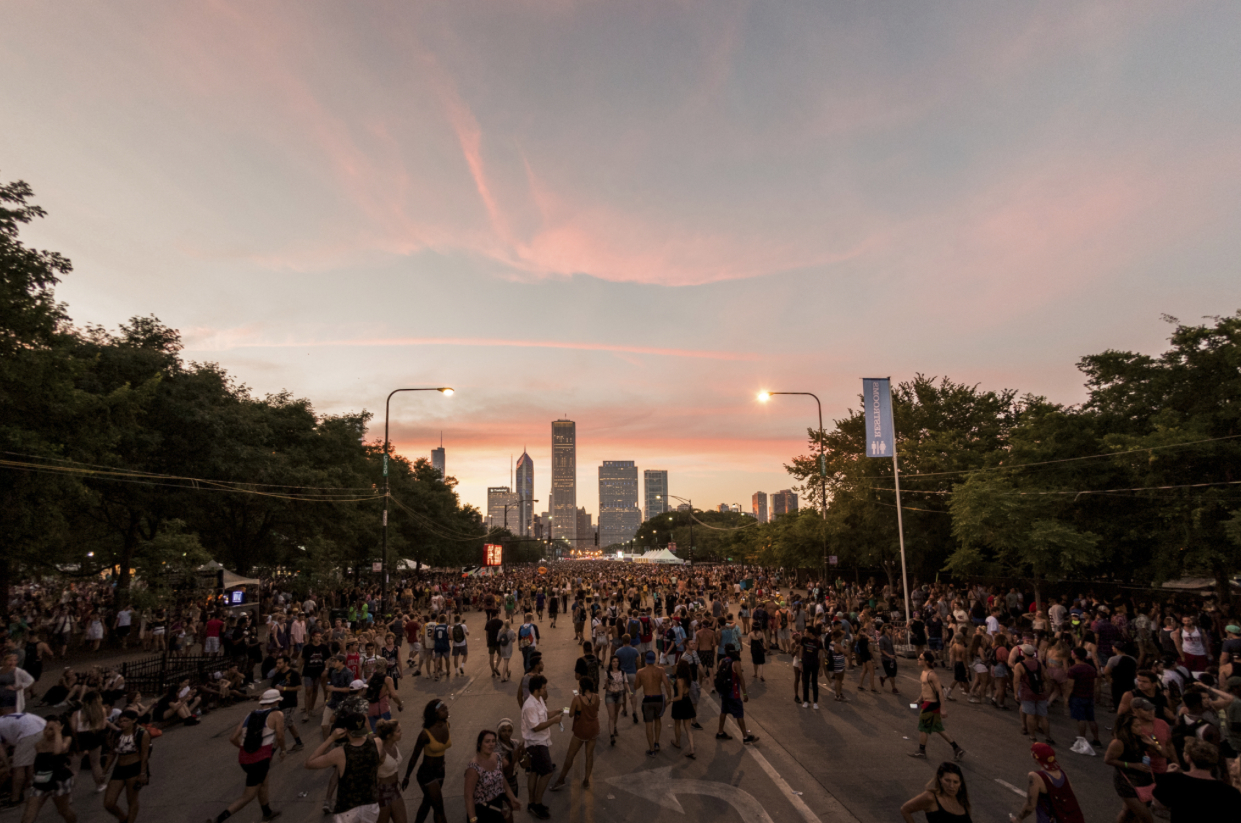 FIDLAR– After making it through three days of Lollapalooza, most attendees’ bodies are brittle and exhausted for day four. I felt the same way when I woke up on Sunday, especially after rocking out at the LCD Soundsystem after show at Metro the previous evening (read more about this in the LCD Soundsystem writeup below). FIDLAR made those weak, tired excuses sound rubbish when they annihilated their main stage performance on Sunday afternoon. The band’s aggressive punk energy revitalized my senses as soon as I arrived, especially since the Bud Light stage’s speakers were screamingly loud. The volume wake-up call was needed though— there was a point where the band played a slow interlude during “Stoked and Broke”, and I felt my body begin to fold in on itself. Luckily, they brought their relentless energy and ran with it throughout their entire set, assisting Lollapalooza attendees to stay on their feet.

The mix of songs from both of their records, FIDLAR and Too, reinforced the mantra behind the band’s name, “Fuck It Dog, Life’s a Risk” and was very appropriate for the party atmosphere that reins through Grant Park during Lollapalooza weekend. Frontman Zac Carper screamed as he celebrated drinking cheap beer, getting high on a cocktail of drugs, and lamenting of life’s hardships, making it hard to believe his throat isn’t covered in blisters. These songs served as a point for celebration for everyone in attendance, whether they were just looking to party or reconsider their current life struggles.

Third Eye Blind– Third Eye Blind had quite the showing before they walked onto the Lake Shore stage, most likely from the nostalgia stimulated by their fantastic debut album. The diversity found in the crowd was both a good and bad thing and gave this writer one of the most eye-opening moments of what Lollapalooza has become today. I heard a multiple people say “I hate to say it, but yesterday feels like a blur” after spending much time at Perry’s stage. A girl walking out of the crowd felt compelled to tell me something and looked me straight in the eye, but she only pronounced nonsense— I tried my best to understand whatever she tried to say but to no avail. Lastly, the crowd was stacked with “bros” knocking into people, yelling about nothing into their neighbor’s ears, and barely watching the show. I really have no distaste for any of these people, but they negatively impacted many attendees’ experience at the show, which is disheartening. Many people who attend Lollapalooza can attest to experiencing some type of aggravation stimulated by this group of party-hards, and it stinks to realize its apart of the whole Lollapalooza package now.

Is this Lollapalooza’s true face, though? Third Eye Blind’s frontman Stephan Jenkins commanded the audience to do so during an extended jam of their hit single “Never Let You Go”, so maybe that just encouraged these interesting humans to come out of their shell even more. The band’s set was cursed with low volume and sound issues, unfortunately, but they still gave their audience something to smile about. Jenkins described the experience of attending a Third Eye Blind show as “blowing like a sunflower” and something that’s defined by “fuck yeah”, instead of beer, division, and hatred. Jenkins recited that mantra many times during more-or-less 10-minute performance of “Never Let You Go”, making them seem a little out of place but not too much. These over-extended jams were also donated to “Semi-Charmed Girl” and “Jumper”, making their hits assume more than half of their set time. Regardless, “Graduate” sounded solid all around, even the high-register needed for Jenkins to match its original recording.

Local Natives– Local Natives have achieved much success with their Lollapalooza performances, their first in 2011 and most recent in 2013. This time around, they graced the north side main stage and convinced even more fans to jump on the Local Natives bandwagon. Every song they played from their first two albums, Gorilla Manor and Hummingbird, were incredibly explosive and energetic, proving the band has never lost the energy the festival loves.

The band’s new material, which will surface on their new album in September, shows home much electronic music has conquered the face of music today. The first track they debuted, “Villainy”, felt like their spin on Father John Misty’s folk-gone-techno experiment “True Affection”. The second, “Fountain of Youth” cried like a call-to-arms anthem for younger generations to combat the sudden tragedies happening today, also supported by “Make America Afraid Again” stamped on Taylor Rice’s yellow Jazzmaster guitar. While it was cool to hear how the band has advanced from the folk roots established on Gorilla Manor, it will be interesting to hear how this computerized influence will effect the impact behind their music.

AURORA– The overwhelmingly positive response delivered by the crowd at AURORA’s performance blew the Norwegian singer off her feet. The 20-year old pop sensation, who just put out her debut album All My Demons Greeting Me As a Friend this year, made her first Chicago performance at the Pepsi stage on Sunday, and everyone in attendance couldn’t have been more impressed. She flaunted celtic-vocal range immensely, hitting highs and lows that continuously created an element of surprise. Many of the beats from Demons are EDM-heavy and immensely powerful, but her abilities towered over them and succeeded in being the most appealing element of the performance.

AURORA was great oddity on this year’s Lollapalooza lineup, but she succeeded in scooping up dozens of new fans on Sunday. Be sure to keep an eye out for when she returns to Chicago.

HAIM– The Haim sisters have been touring their debut album Days Are Gone for a few years now, and, as a result, it seems the band has perfected their craft. All three Haim sisters owned the Bud Light state in their own way as they cruised through their nonsensically-catchy setlist. Este was the sexiest element— she moved sensually as she jammed on her guitar, drum, and keyboards, attempting the lure the audience closer to her with seductive come-hither hand moments and making direct eye contact with many enthusiastic audience members. Este was the perfect hype woman for the group, who gave the audience plenty of laughs and gave an impressive vocal performance on the band’s cover of Prince’s “I Would Die 4 You”. Danielle, the band leader, gave a seamless performance on guitar and vocals and injected some juicy guitar solos into a few of the song’s outros. She jammed harder at the band’s Bonnaroo performance, leaving me hanging for more of her amazing guitar abilities.

The band also debuted two new tracks, “Give Me Just a Little of Your Love” and “Nothing’s Wrong”, both of which add more exciting energy to their growing catalog. “Nothing’s Wrong” was by far my favorite, especially when it changed shape in the middle of the track for its exciting conclusion.

LCD Soundsystem– Rumors of poor audience turnouts for LCD Soundsystem’s reunion appearances can be officially dispelled after the band’s impressive turnout and performance to close out the festival. During the band’s Saturday aftershow at Metro, band leader  James Murphy said “we brought a lot of shit”, and every piece of the band’s setup, including six other band members around him, on the Samsung stage brought their songs to life louder and better than ever before.

The Metro performance showed off the instrumental power behind the band’s lineup best. The house’s sound system was booming (thankfully, I was wearing ear plugs), allowing the dozens of different sounds incorporated into each song to shine through. The bands guitars and drums drilled their punk rock energy further into the audience’s ears, making the zany “Movement” and the outros to “You Wanted a Hit”, “Yeah”, and “Tribulations” feel crazier than ever before.

James Murphy matched this energy well at the Metro, but it was nothing like his performance at Lollapalooza. When the band began their set with “Us v. Them” and “Daft Punk Is Playing at My House”, he was pumped up, unleashing passionate screams and lengthy whole notes to lead the band’s energy and quickly win the audience over. His vigor refused to die throughout their continuous 100-minute set— the band fit in as much material as possible before they were kicked off stage, swapping out a fake encore for a conclusion worthy of Lollapalooza history.

My friends believe LCD Soundsystem even outplayed Radiohead on Friday, but I’m not sure if I can agree to that one. If you attended both Friday and Sunday of Lollapalooza this year, I leave that thought up to your own interpretation.

Photo Gallery : José González @ Jay Pritzker Pavilion Kidzapalooza! Where The Little Ones Gather To Rock Out At Lollapalooza