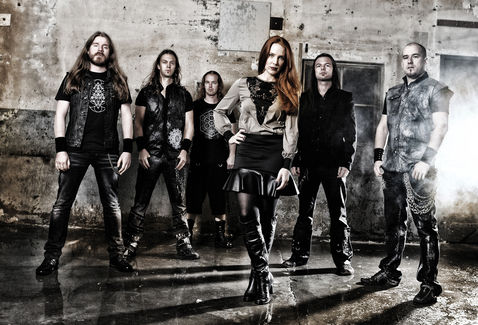 Dutch Symphonic metallers, Epica, recently dropped off their current North American tour alongside labelmates and Swiss Folk Metallers, Eluveitie as well as Canada’s own, The Agonist. The tour kicked off September 8th in Baltimore, Maryland and unfortunately Epica had to drop out of the tour after their show on the 12th in Quebec City. Lead singer from Epica, Simone Simons, had to rush and fly back home to The Netherlands to attend to a close family emergency. Originally the group cancelled the next four dates which included Chicago, but due to the circumstances not improving back home, the group was forced to cancel their appearance all-together. A message from management was sent to their ticketholders:

It is with heavy hearts that we have to announce the cancellation of all remaining shows of our North American tour.

A couple of days ago, Simone had to fly back to the Netherlands to be with her family due to an emergency. Sadly, there has been no major improvement in that situation so it is impossible for Simone to return to the tour at this moment. Therefore, we have no other option than to cancel the remaining dates.

However, the Revolver tour will carry on as scheduled with Eluveitie, The Agonist and Martina Edoff.

We will again be rescheduling the North American tour in support of The Quantum Enigma for the beginning of next year.

If you wish to refund your tickets you can do this through the venue. VIP tickets purchased through Sound Rink will be refunded automatically. Tickets for this tour will not be valid for the rescheduled dates.

We want to thank all our fans and partners for their understanding and support in this difficult situation.

Simons’ father was “fighting for his life” at the time and now he is “slowly recovering” according to Simons. The group can’t seem to catch a break as this was their second tour scheduled to trek through the states they had to cancel. Epica also were set to tour throughout the states about a year ago alongside Machine Head, Children of Bodom and Battlecross but Machine Head cancelled the tour to focus on their album rather than touring. Not only did Simone receive bad news but keyboardist, Coen Janssen also was forced to sit out of this tour to attend to his wife who recently was diagnosed with cancer. So this has been a two for two bad luck string for the symphonic sextet.

For those not familiar with the group, they were originally formed in 2002 after founding member, Mark Jansen left his former progressive metal group, After Forever. Epica is known for their heavy use of symphonic elements, orchestral pieces and classical sounds in addition to female vocals and male growls. Respectively, each group inputs their own instrumental parts while the lyrics are written Simone and Mark. Lyrical content mostly revolves around science, religion, world events and other controversial topics. Many of their albums have gone top ten overseas in Europe, meanwhile the genre is slowly growing here in the states. Their latest album, The Quantum Enigma, is their best album to date debuting at #110 in the US Billboard Charts and #4 in their native Netherlands.

Although the group experienced a short-lived rocky journey while on the tour, the group has confirmed that they have 25 new songs for a follow up to their 2014 album. Mark Jansen had to say this In regards to putting together the album:

“It will be a hard decision, because we have 25 killer tracks. And we recently came together as a band and sat down and listened to all the tracks we wrote. And, yeah, it’s gonna be a very hard decision, because the quality is really high. Sometimes you are happy when you can fill an album with killer tracks, but now we have the luxurious position we are in that we have at least that many great tracks, so we have to drop tracks that normally would have been for sure on an album… We have to decide what to do with [the extra tracks], because there are many options. I would like to use them right away. It feels shit to wait three more years for a song that’s already great to get released. So let’s see. But everything is a possibility.”

As the saying goes, “The third time’s the charm” thus Epica has confirmed that they will be rescheduling their missed North American dates for an early 2016 tour throughout the states once again. As these last two tours were supposed to be their triumphant return to North America in support of their 2014 release, I believe there’s reasons things happen and I know Epica will be stronger than ever when they hit US shores next year.