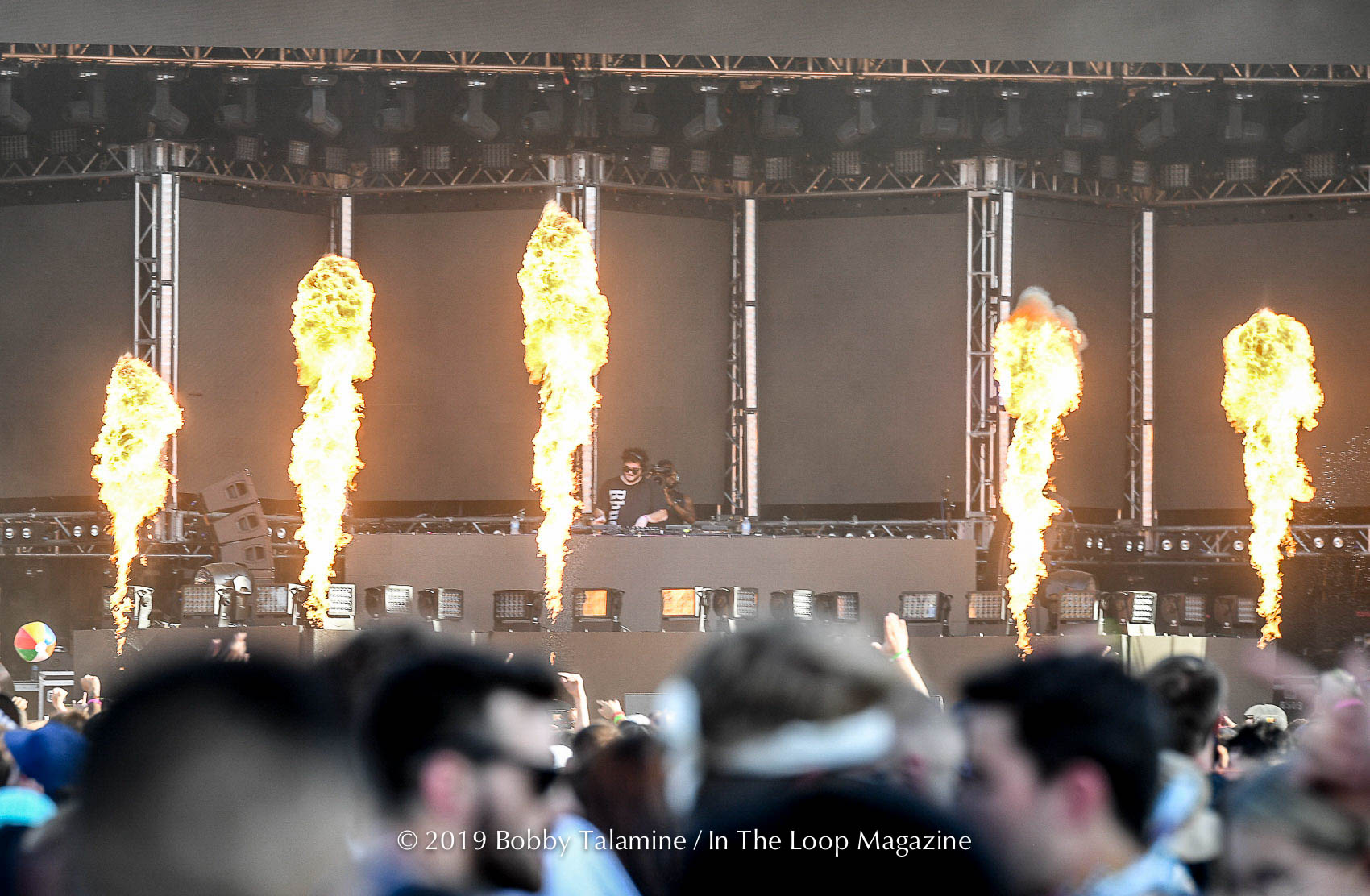 It’s day three here at Lollapalooza, which means the quaint, moderately busy times of Thursday are now a distant memory, and the festival is now operating at full capacity – and when walking to the T-Mobile stage for tonight’s performance by headliner Twenty One Pilots, I saw firsthand what that full capacity looks like.

The experience of walking down Columbus Drive at peak Lolla is akin to wading through a raging current of water filled with hungry, psychotic fish. Bodies move in ever which direction, snippets of music from various stages wash over the pavement, and an unbearable energy – a force field – threatens to consume you if you do not keep moving. Amidst all that chaos, here are some of the sights that stood out to me:

But before that experience at the end of the day, there was plenty of brilliant music to hear.

Fantastic Negrito – the awesome performing name for Xavier Amin Dphrepaulezz – is part preacher, part bluesman. On the musical side of things, Negrito’s sound is dynamite. Winner of numerous accolades, including two Grammys and NPR’s 2015 Tiny Desk Contest, Negrito and his band play a thriving, urgent blues that is equal parts roots music, psychedelia, and social commentary; indeed, hearing Negrito wail about working class life, patriarchy, or government propaganda, one hears the missing link bridging blues music’s triumphant past with the present – that rather than live in the past, when blues was the sound of recently emancipated slaves and their direct descendants, musicians can instead use blues music to interpret the chaotic present. And on the preaching side of things, Negrito’s spoken-word interludes between songs were nearly as entertaining as his guitar playing, during which he informed the audience that “The greatest commodity of all time is fear,” and that “Artists: If you aren’t getting hate mail, you ain’t doing your job.” Wild, energetic, and urgent, Fantastic Negrito makes blues relevant to a 21st century audience, and as someone who credits Muddy Waters, Howlin’ Wolf, and other Chicago bluesmen as formative mentors in my artistic development, I applaud Negrito’s accomplishments.

Fantastic Negrito, though, is not the only roots rocker on a Lollapalooza stage. On day two, I had the privilege of watching The Nude Party, the hilariously named North Carolina rock band that is part psychedelia, part surf rock, part folk, but all rock ’n roll. With a three-guitar lineup – seriously, how often does one see that, nowadays!? – The Nude Party steamrolled through a collection of original songs, bringing a grooving, raw energy that is entirely absent from the polished sets of groups like The Strokes. The essence of rock can be heard in groups like The Nude Party (and in Chicago locals Twin Peaks, which Nude Party gave a shoutout to), and as one of the many groups I had never heard of before attending Lollapalooza, I walked away thankful for having learned of their sound.

When most folks think back to Smino’s outstanding Lollapalooza set, much attention will be paid to the surprise appearance by Chance the Rapper, who appeared from backstage and lent his unique rhyming capabilities to a duet with the St. Louis rapper. And while it was an excellent moment – the kind unique to music festivals – I want to instead focus on Smino’s live sound, and the pronounced way it differed from Tierra Whack’s performance on Lollapalooza’s second day.

Befitting a hip hop show, Smino’s set featured plenty of rapping, all of which he performed with remarkable clarity and precision. What it also featured, though, was a full band in addition to a DJ. So while a DJ was there to provide certain samples and backing tracks, Smino also had a backup singer, a percussionist, a keyboardist, and a bassist to further flesh out his sound. It all created a hip hop soundscape that was far richer and more nuanced than most rap shows, which regrettably included Whack’s Friday set.

Whack is, without a doubt, one of hip hop’s most exciting talents, and her 2018 release, “Whack World,” is a modern classic. And perhaps it is the stature of that debut album that made her conventional set so underwhelming. Performing in a typical DJ/rapper setup, Whack rapped over pre-recorded backing tracks of her material, and for songs not dependent on rapping – say, “F*ck Off” or “Pretty Ugly,” two of the strongest tracks off “Whack World” – she opted to sing over the recordings of her own singing. I should be clear that I was in the minority – the American Eagle stage was packed with Whack’s fans, all of whom were eating up her charismatic stage presence and gleefully singing along with her material. Yet, from my vantage point, an album as weird, unconventional, and hauntingly beautiful as “Whack World” demands a more nuanced live treatment, and I hope Whack strongly considers touring with a full band to further flesh out her material.

Virtuosity is a rare thing, in today’s blues climate – which is not to say that talented players are nonexistent; rather, my point is that blues music today does not operate on virtuosity like it did in past eras, when guitar players like Michael Bloomfield, Eddie Hazel, and Peter Green were household names. Thank the heavens, then, that we have Gary Clark, Jr., the Austin-based guitarist whose incendiary fretwork and soaring tenor had the Lollapalooza crowd in a tizzy. Backed by a superb band of rhythm guitar, bass, drums, and keys, Clark tore through a series of blues originals with an energy and precision that brought me back to my high school years, when I would listen to Bloomfield and the like with an open-mouthed, stupidly grinning sense of awe. The cleanliness of his lines, the sharpness of his tone, the ability to both bend the strings for emotional resonance and explode with rapid-fire arpeggios – it’s a unique pleasure, watching such virtuosity, and I was overjoyed to see such a large crowd taking in similar pleasures.

I entered Tenacious D’s 7 p.m. concert with a strange anticipation, solely because I am so familiar with the exploits of the band’s lead singer and guitarist, actor Jack Black. And while Tenacious D does put on the exact kind of show one would expect from a band featuring Jack Black – he and his sidekick, Kyle Gass, engaged in various skits and gags throughout the concert – what is notably is just how good of a band they are. Even though they are a comedy band (and a pretty funny one, at that), the music does not suffer because of the comedy (a la the Flo and Eddie years for Frank Zappa).

Things began in a suitably exaggerated fashion when the group took the stage – Black, boasting a burly beard and long hair, held a large white orb in his hand, about which he delivered a deadly serious monologue to the audience; two heavy metal songs commenced from the band’s latest album, a rock opera tiled “Post Apocalypto.” And such was the vibe of the concert: whether Black and Gass acted out a skit about how their guitarist was possessed, or faked an argument where Gass “quit” the band and stormed off stage, the vibe was both fun and musically serious, which in my mind separated it from all the other musical parodies out there. It’s easy to look at Tenacious D and think they are a 21st century Spinal Tap, but as their set neared its conclusion with another dead-on, acoustic-driven metal piece, I realized the key difference – Black and Gass have far too much respect for metal to merely mock it; rather, they revel in its absurdities and excesses, which allows them to produce such a fun, musically engaging concert.

Befitting a band that took its name from an Arthur Miller play (the masterpiece “All My Sons,” for those of you who are curious), Twenty One Pilots put on a masterful show to close out the third day of Lollapalooza, one with a uniquely strong showing of theatricality and showmanship.

Those strengths were immediately apparent from the set’s opening moments, when vocalist/multi-instrumentalist Tyler Joseph took the stage with a molotov cocktail and “lit” a stage-bound car on fire (obviously, the car was rigged to start on fire in strategic places, but it was a cool effect, nonetheless). From there, the band launched into an aggressive rendering of “Jumpsuit,” and every track from that point featured a creative element of staging, from crafty manipulations of the stage cameras to various costume changes for Joseph and Josh Dun, his musical partner (and a phenomenal drummer). I have seen such usage of video and costume before – St. Vincent did it brilliantly in her most recent tour – but I appreciated the sheer inventiveness of Twenty One Pilots’ approach, and how the different approaches complemented the themes and moods of their songs.