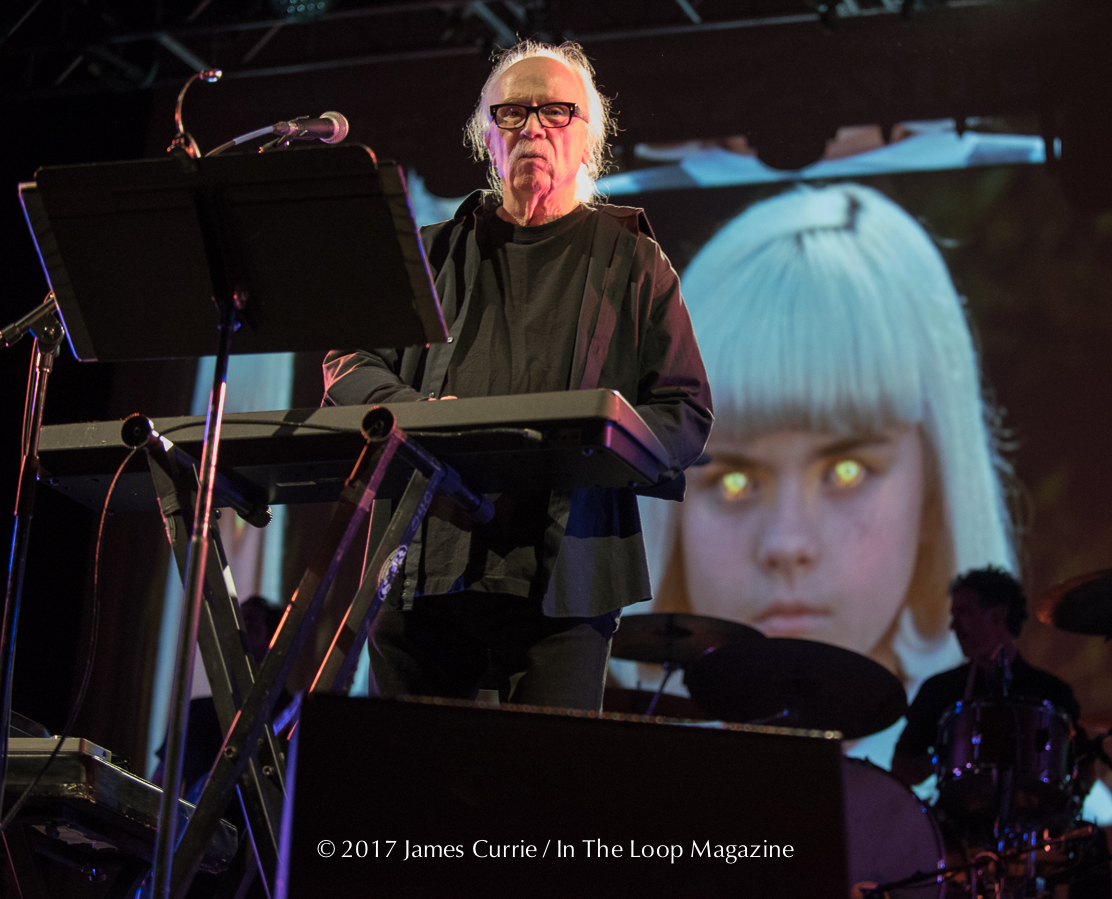 You can’t mention the name, John Carpenter without conjuring up images that bring chills to the night. That name is synonymous with all things spooky for the last 40 years on the big screen from classics like “Halloween”, “The Village of the Damned” and “Prince of Darkness”, but as of late, he’s taking on a new thriller. This one is performing live music. Carpenter has put together a band and at least for a month, is taking those nightmarish hits to the road on a tour dubbed, “Halloween with John Carpenter Live: Anthology Tour” AKA John Carpenter Live: 2017 North American Tour.

Tonight, John Carpenter brought his band to Chicago and played in a venue fitting of his haunting melodies. The place was the Aragon Ballroom. Uptowns crown jewel of vintage concert venues. The spooky structure was a perfect match for his tumultuous tunes. Hearing the “Halloween” theme in a room with glowing night sky and center court neighborhood views worked. Though the venue wasn’t as full as I’d like to have seen, it was still a solid turnout.

The night opened with a DJ set from Bric a Brac. He spun darkwave tracks to help set the mood. His DJ table rig adorn with Halloween mask lit from the inside and flanked with monster banners on either side created an even more creepy vibe.

After the DJ set was done, the lights went dark, the stagehands carried off his gear and things started to take “shape” for the main event.

A little after 9PM, John Carpenter and his band (which consists of his son Cody Carpenter and the backing band for Tenacious D) walk out and assume the positions. JC takes center stage behind a rig of keyboards, laptops and other various electronics. His son Cody, takes stage right and readies himself into another electronic hive. Behind him, John Konesky on rhythm guitar, Scott Seiver on drums, John Spiker on Bass and Daniel Davies on lead guitar. They open with the “Escape From New York” theme complete with 1980’s digital tech visuals behind them.

The show is paired perfectly with visuals from the iconic movies. They are basically, trailers of the movie clips broken down to fit into the few minute songs. The stage is set dark and creepy. An occasional puff of smoke from a fog machine and dark colors like blues and red make up the majority of the scene.

Carpenter kept the speaking to a minimal. From time to time would introduce a song, tell about who helped make it or when he intro the band members, beyond that, we was playing his latest role as a front man to a rock band. He pointed at fans in the crowd, boogied with his fists clutched and hips gyrating in a mild shimmy and pounding out the keys that made his films classics that resonate in our heads.

It was odd at times with trying to get into one or two songs though as there really isn’t much to many of them. Musically anyway. Take for example the “Halloween” theme. It’s like three notes, repeated for 3 minutes. While JC lays down the main fill, his son keys those familiar trills that make it so recognizable but the rest of the band don’t really have much to do. Yet it doesn’t matter. This is one of the most cheered for songs in the night. EVERYONE there LOVES Halloween. It didn’t need to be big or gradiouse. Those few repetitive notes combined with Michael Myers in the background made just about everyone’s night. If it were any other band, or group doing this, it just wouldn’t have work.

Throughout the night, we get reminded of his masterpieces. The songs we remember and the visuals to match. We see and hear from not only the “Halloween” movie, but cult classics like, “They Live” (where the audience sees Rowdy Roddy Piper and cheers!), “Vampires”, “The Thing” and my personal favorite, “Escape From New York”. The defining film that broke Kurt Russell from a Disney darling, to a cult classic hero.

You could tell this is something John Carpenter loves doing. He wants to be there, front and center, playing these songs to adoring fans. In an earlier interview on the Mancow radio show, Carpenter said that this is where he wants to be right now. Mancow asked him about making movies and would he be involved in the newest Halloween film with Jamie Lee Curtis and he said yes that he was going to be an Executive Producer and they are working things out, but right now, making music is more fun than movies. Horror music is alive! Mancow also asked if any of Trent Reznor’s Halloween song (a reworking of the classic track) would make it into the new film. He said he didn’t know, they weren’t that far into it yet.

Seeing John Carpenter like this live is an experience like no other. When has any other director/producer fronted a live rock band playing his own masterworks? You get the full encompassing John Carpenter experience with this tour. There is a reason he truly is the master of horror. This just solidifies it even more.

For more on John Carpenter and his current tour, click here

Setlist for John Carpenter live in Chicago at the Aragon Ballroom November 9, 2017: