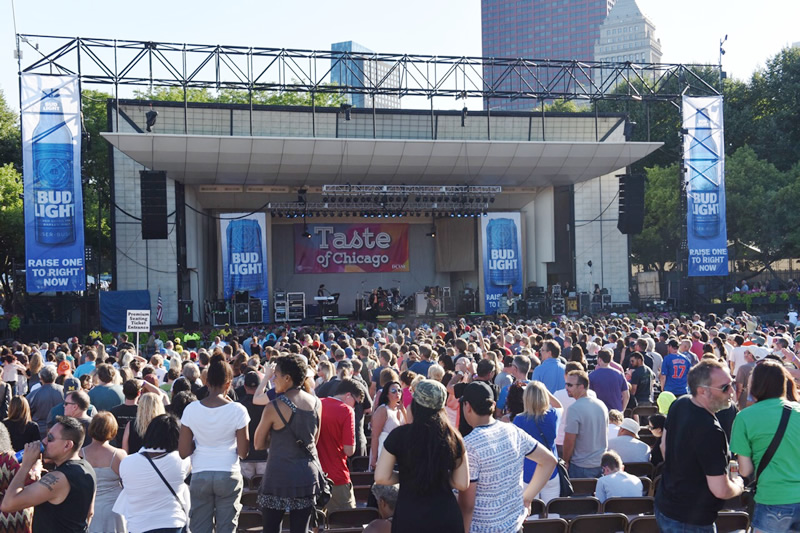 The City of Chicago’s Department of Cultural Affairs and Special Events (DCASE) is pleased to announce the full music lineup for the 37th Annual Taste of Chicago, July 5–9, in Grant Park. The festival will present a diverse mix of chart-topping, crowd-pleasing acts at the Petrillo Music Shell that includes Alessia Cara, Café Tacvba, Ben Harper & The Innocent Criminals, Passion Pit and The O’Jays—plus the best of Chicago’s local music scene on the Bud Light Stage. Tickets for the seating area at the Petrillo Music Shell will go on sale Friday, May 5, at 10 a.m. at the Taste website, tasteofchicago.us. Admission to Taste of Chicago is free.

“This year’s Taste of Chicago is a cultural event for all of your senses with uniquely-Chicago food and beverage experiences, street art, dancing and a phenomenal music lineup,” said Mark Kelly, Commissioner of the Department of Cultural Affairs and Special Events. “We are especially excited to feature high caliber national artists along with top local musicians—as openers at the Petrillo Music Shell and throughout the day on the Bud Light Stage.”

New for 2017, on Thursday, July 6, Sabor de Chicago will celebrate the culture of Chicago’s Latino community throughout the day with dining, dancing, special performances at the Petrillo Music Shell and the Bud Light Stage and more. Café Tacvba will headline the Petrillo Music Shell with ¡Esso! Afrojam Funkbeat with Los Vicios de Papá opening, and throughout the day, the Bud Light Stage will present local Latin artists. More details will be announced soon.

Multi-platinum singer-songwriter Alessia Cara has been topping charts and swaying hearts since her 2015 hit single “Here” debuted to critical acclaim, showcasing her song-writing skills as well as her larger than life voice. In 2016, “Scars to Your Beautiful” reached the top ten on the Billboard Hot 100 and hit #1 on the US pop radio charts. Cara’s single “How Far I’ll Go”, written by

Lin-Manuel Miranda for the Disney film Moana, has been a runaway hit since its release. Her latest single “Stay” featuring a collaboration with producer and DJ, Zedd, is the summer jam of 2017.

Chicago-based songstress Eryn Allen Kane will open the evening with an electrifying performance. In November 2015, the budding superstar released her solo debut Aviary: Act I. The stunning 4-track effort featured both of Eryn’s breakout singles “Have Mercy” and “Slipping,” as well as new fan favorite “Piano Song” (featured on BET’s Being Mary Jane) which catapulted to #5 on Spotify’s “Global Top 50 Charts.” “How Many Times,” the hit single from her 2016 Aviary: Act II EP is a testament of her momentum as a star on the rise.

Café Tacvba, is widely recognized as Mexico’s leading alternative rock band and one of the most influential alternative groups to come out of Latin America. With a blend of rock, indigenous folk, electronic and punk music, their album Re was named the “Number One Latin Rock Album of All Time” in 2013 by Rolling Stone. Even after 25 years of music together, the multiple GRAMMY® Award-winning group continues to expand its already massive audience of devoted fans throughout the Americas, Europe and beyond.

Ben Harper & The Innocent Criminals came together in 1999 to record the album Born to Shine which showcased Harper’s rock side, and he turns to the group whenever he wants to underscore his funky, fuzz-guitar talents. They have played together off and on over the years and in 2016 they collaborated once again on Call It What It Is. Ben Harper is a three-time GRAMMY® Award winner and is known for his skills on the guitar, along with vocals and live performances and his eclectic mix of blues, folk, soul, reggae and rock.

Passion Pit is an American indie electronica band from Cambridge, Massachusetts, formed in 2007. The band consists solely of Michael Angelakoson on lead vocals and keyboards, joined live by Chris Hartz on drums, Aaron Harrison Folb on bass and synthesizers, Giuliano Pizzulo on guitar and synthesizers and Ray Suen on guitar and synthesizers. Recent releases include Kindred with the hit single “Lifted Up (1985)” and a 2016 Christmas Album featuring the single “Stained Glass Windows” from Merry Christmas, Mr. Fields.

The Kickback immediately enters the front ranks of contemporary rock-n-roll with the 2017 release of Weddings & Funerals from Jullian Records. The album is a furious, exhilarating and deeply emotional collection from the Chicago based band with lead singer Billy Yost, guitarist Jonny Ifergan, and bassist Daniel Leu. In 2016, the band performed at Taste of Chicago on the Bud Light Stage.

With chart topping hits including “Love Train,” “Used To Be My Girl,”  “Brandy” and  “For The Love of Money,” The O’Jays connect with an era and a sound that provided the soundtrack for generations of R&B and soul fans. Inducted into the Rock & Roll Hall of Fame in 2005, The O’Jays are still hitting the road with the same electrifying energy they’ve had for more than 50 years.

Maurice Jackson’s Independents will tap into the singer-songwriter’s career of recorded music as both a solo artist and as a member of the groups The Independents and Silk during the 70s and early 80s. The Independents, formed in the early 70s, released 8 singles, each of which rose on the billboard R&B charts. Their record “Leaving me” was a number one R&B hit.

The popular Bud Light Stage at the Taste of Chicago will offer five days of performances by Chicago’s best up-and-coming and more established artists, July 5–9 in Grant Park. The entertainment stage, located at the south end of Taste of Chicago at Columbus and Balbo Streets, is open from noon to 8 p.m. on Wednesday through Friday and 11 a.m. to 8 p.m. on Saturday and Sunday. The full schedule can be found at tasteofchicago.us. All Bud Light Stage performances are free.

2017 will offer an eclectic mix of genres and Chicago artists on the rise. Highlights include three ChicagoMade A&R Audition winners that were selected by a panel of music executives on October 22, 2016, including: rap artist The Boy Illinois and R&B artist Justin Ruff on July 5, folk duo Clique James on July 7 and pop/R&B artist Shuba on July 9. Other highlights include hip hop and underground rap artist ShowYouSuck on July 5, known for his collaborations with artists from other genres like punk and rock. On July 7, Jonas Friddle & The Majority led by Friddle’s banjo will perform for folk and country fans. On July 8, Split Single, a rock band led by singer-songwriter Jason Narducy, wrap up a full day of rock-n-roll. On July 9, Taste goers won’t want to miss the popular alternative country band The Waco Brothers featuring Jon Langford.

Friday, and 10 a.m.–9 p.m., Saturday and Sunday. For more information on the FREE admission festival, call 312.744.3316 or visit tasteofchicago.us. To plan your trip to Chicago, visit choosechicago.com. Join the conversation on Facebook at Taste of Chicago and follow us on Twitter, @TasteofChi (#TasteofChicago) and Instagram, @ChicagoDCASE (#TasteofChicago).