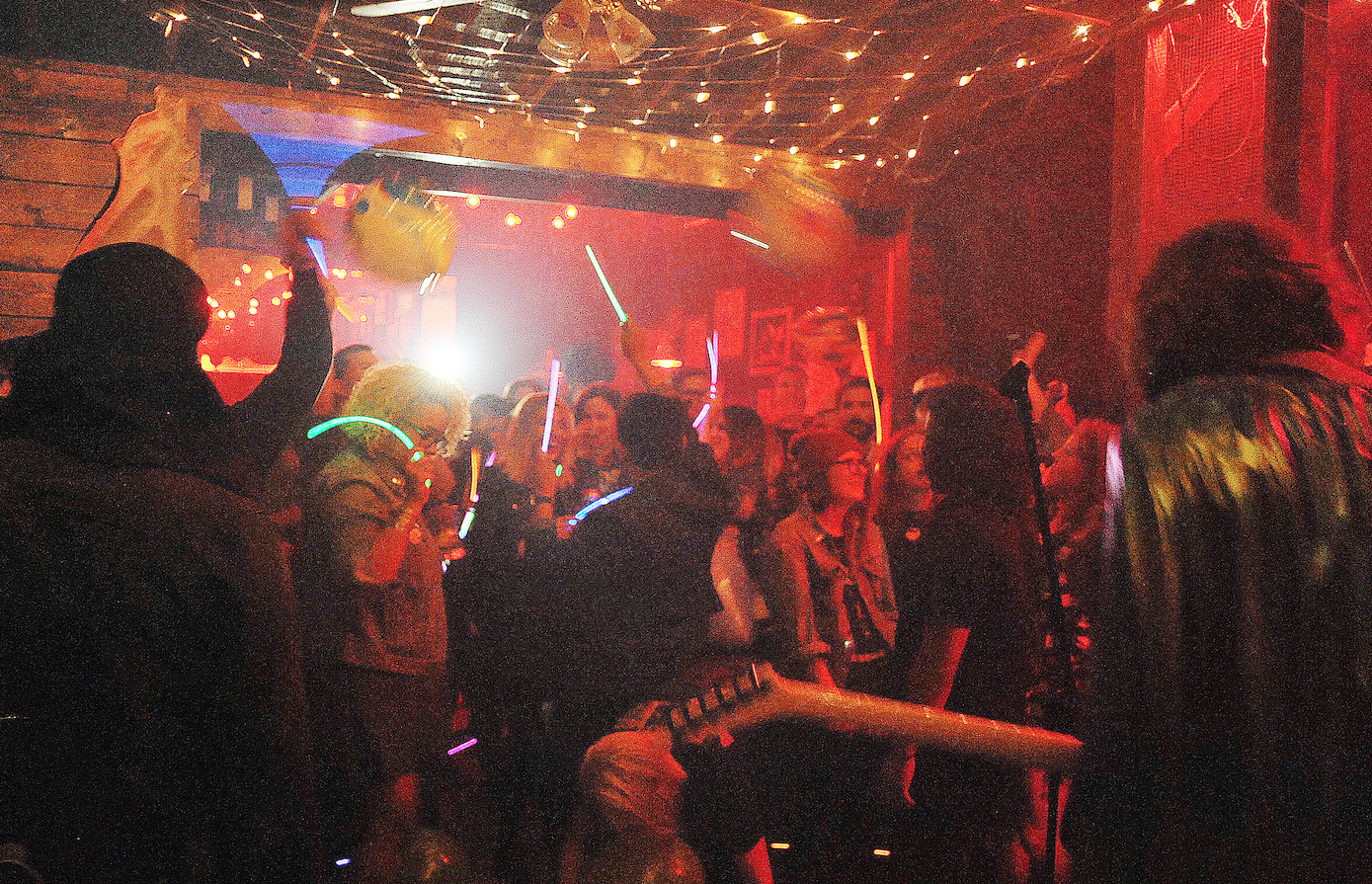 A lot of the fun in watching local glam-disco rockers The Gold Web, is how they re-energize antiquated rock tropes and slyly turn them into something  new. Not only have they built a reputation for redressing disco, glam rock, oddball (but well designed and executed) costumes, and low budget theatrics but also for serving the whole shiny mess up with an intensity akin to The Rapture. It’s only fitting that they’ve evolved into something else, and none of it expected. With a new full length (Natural Born Mystic, Dream Come True Records), a new musical approach (the new songs lean toward pop rather than Euro-disco), and new costumes (bye bye birdman…) the band makes it clear that their motto is, “All the way is far enough…” The recent show that I caught at the Slippery Slope wasn’t merely a gig but a nuclear freak-out crossed with an old school happening. It was to say the least, definitely NOT what was expected when one walked though the door.

To be sure, Natural Born Mystic contains some of the most satisfying music that The Gold Web has ever produced with musical concepts fully realized and developed. The mid-CD track “Moonlight” sounds like their signature with a swooping bullet proof bass chord, a crunchy hook that boom-a-rangs sharply, and vocalist/guitarist Max Perenchio’s way of slyly twisting and stretching the lyrics like taffy, the song is one big, sexy, summery addiction. Where The Gold Web’s previous outing, Freaks (Dream Come True Records) had an old school disco EDM charge (think of Sylvester and Passion Pit as conjoined twins) Natural Born Mystic relies on pop hooks, solid writing, and upfront vocals. The goofy WHOOOOOSHES, beeps, and sound effects still pop up but they seem less like gimmicks and the music is just as danceable as before.

The most conservative name on the Slippery Slope bill was the new super group The Muvves with members from Vamos (Andy Ryan, Jawsua Drumms), The Gold Web (Rich Lomdardo) and the late Rabble Rabble (Ralph Darski). With working class original rockers like “Insomnia,” “Jealous Boy,” and “This Could be the Night,” the band displayed passion and a ready made cohesion that gave the songs a blistering impact. The Muuves got a kinetic reaction from the Humbuldt Parkers and Logan Square hipsters, and you couldn’t deny that hearing a hot band, playing great meaty songs, in front of a bonkers crowd doing ‘The Jerk’ and ‘The Mashed Potato’ is indeed a beautiful thing.

The close of The Muuves’ strong set signaled the start of the show going completely off the rails in an unexpected way: members of The Strange Doll Haus grabbed the stage and upped the energy (and curiosity) of The Slippery Slope. The Gold Web and The Strange Doll Haus have entered into a partnership that seems absurd (drag queens running amok in hetero-yuppie land?) but it actually makes a lot of sense when you consider that both use theatrics, wit, and originality in the pursuit of good saucy fun (if you want ‘good clean fun’ go to Disneyland). The mash up of uber-queer drag and frat boy-glam rock  upped the night into a raging free for all. Doll Haus members Lexi Pro, Fox E. Kim, and Electra Cute ripped though their songs with athletic aggression which was both fun, scary and hilarious.

Then came the main attraction with confetti showers, glo-sticks, fog, and a massively loud but ingenious mix of psychedelic funk and rock heralding the arrival of the headliners. Starting the set with a woozy,  beefed up take on “Natural Born Mystic” Perenchio  sauntered through a set loaded with 60s era psychedelic funk laden with jolly goofiness (it really is hard to take him seriously with glitter caked on his face). With percussionist Brian Edward Selke throwing a non-stop tantrum (his outfit made him look like a chrome Brillo pad from another planet), Lombardo ferociously pounding his tom-toms (un-characteristically muscular for psychedelic rock) and Jake Serek on bass gliding through it all with a benign deadpan expression on his face, The Gold Web resembled a three ring circus gone berserk.  It hardly mattered what the band played (well, big chunks of Natural Born Mystic with a dollop of Freaks) since the show  was clearly more about the vibe (freaky), visuals (well, freaky), and party (wild). For a finish the band reached Nirvana with a slamming rip through the Hendrix chestnut “Purple Haze” and the effect could only be described as explosive. The late Phillip Wynn of The Spinners once proclaimed on a Funkadelic song “Not Just Knee Deep,” “Can this be me, in funk so deep?” Perenchio and his merry band should have warned him.