Mac Sabbath Live At The House of Blue Cheese: Send In The Clowns 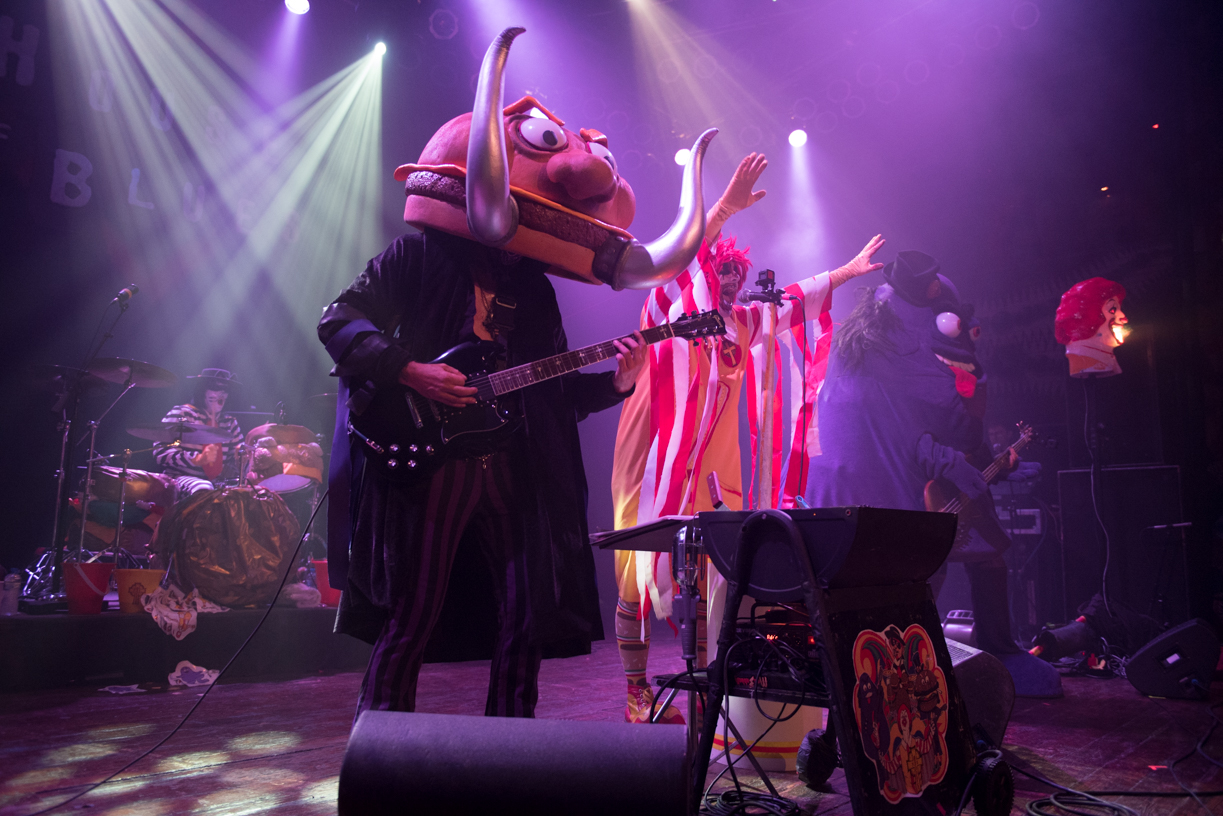 Monday, September 12th, 2016 the House of Blues Chicago was taken over in the tastiest fashion possible. Mac Sabbath headlined the show joined by Clownvis Presley and The Hamburglars, dubbed “The Clown Power Tour”. This show was beyond fun. Some might even say it was downright delicious.

The show opened up with a set from Clownvis Presley. Yes, a clown based Elvis tribute. The crowd seemed to really dig what he was doing. His outfit was headtotoe details. A giant pompadour, purple jumpsuit with sparkles, a big red clown nose, and the voice of Elvis. Very entertaining.

The second band to perform were the Hamburglars. All band members dressed as the famous cartoon character known for his thieving hamburger ways. They were a high energy band, perfect to play right before Mac Sabbath. They performed a variety of covers including ‘Dirty Deeds Done Dirt Cheap’ by AC/DC (hilariously dubbed “Burger, please. Done with cheese”) and ‘Rebel Rebel’ by David Bowie, with the lyrics changed to “Robble Robble”, which seemed to be the most popular line for their lead hamburglar to sing throughout the whole show. In fact, he would sing that almost exclusively rather than the actual lyrics to the songs they were playing. And it still kicked ass. I specifically remember their drummer looking a lot like Adam Sandler back behind the kit in the popular movie Airheads. And at times the band sounded like famous Washington D.C. punk rockers Bad Brains. They got the crowd all riled up for Mac Sabbath. A very cool opening band indeed.

Then came time for the headliner. Mac Sabbath. I went into this show with low expectations and very little knowledge of what I might see. I’m a longtime Black Sabbath fan and appreciate humor in music so I knew I’d see something fun. But I didn’t want to do too much research before hand. I wanted to be surprised. And I was. Mac Sabbath hit the stage donning their expertly tailored costumes which looked like fast food meets Gwar. They came out swinging, opening with “War Pigs” AKA “More Ribs”. All of the lyrics to every song were changed to fit their act. Their drummer, named The Catburglar (he wore face paint that resembled Peter Criss of KISS – Peter Crispy) was extremely tight and powerful.

I think my favorite aspect of their show was how spot on they were with the integrity of the actual songs. They made sure to keep the original sound, style, and song form in tact. Their drummer and 8′ tall purple crazed bass player, Grimalice, were unbelievably tight. Super skilled and very proper. Song tempos and dynamics were nearly perfect. Ronald Osbourne, their fast food clown front man even spoke with a British accent and utilized the same mannerisms as the Prince of Darkness himself, hunched over, walking back and forth across the stage, doing the frog jump, clapping and interacting with the crowd. Lead guitarist, Slayer MacCheeze stool stoic with purple striped pants, flowing cape shirt and 3 foot hamburger head with googly eyes and giant horns. They did their homework. And probably ate some burgers and fries while doing it.

Throughout the night Ronald Osbourne would engage with the crowd in between songs. He continued to mention other fictional “Drivethru Metal” acts that could potentially share the stage with them on tour. Some of them were so funny that they could be comedy gold. As golden as the arches themselves. Some of my favorites were Cinnabon Jovi, Gwarby’s, Great Whitecastle, Burger King Diamond, Twisted Sizzler, Dairy Queensryche and Chicago’s famous Blue Cheese Brothers. My absolute favorite theoretical food band mentioned in the show has to be Spinal Tapplebees. Please, someone, start all of these bands.

As the evening progressed the crowd became more and more invested in the show. There were a few hardcore Sabbath fans watching the show that clearly didn’t know what they were going to see, and were too hardcore to appreciate it (which was hilarious to me). But there were also tons of Sabbath fans there that absolutely loved the concept and stage show. Plus hearing these songs in a live setting, performed very, very well is always a treat. This show was true fun.

The audience was treated to a hilarious concept. One which I hope catches on. I’d go see them again and again. I recommend taking your friends to see these guys anytime they come to town. You too can participate in the “Organic Funeral”.

For more on Mac Sabbath including the current tour, click here

For photos from the shoe at House of Blues Chicago, click here