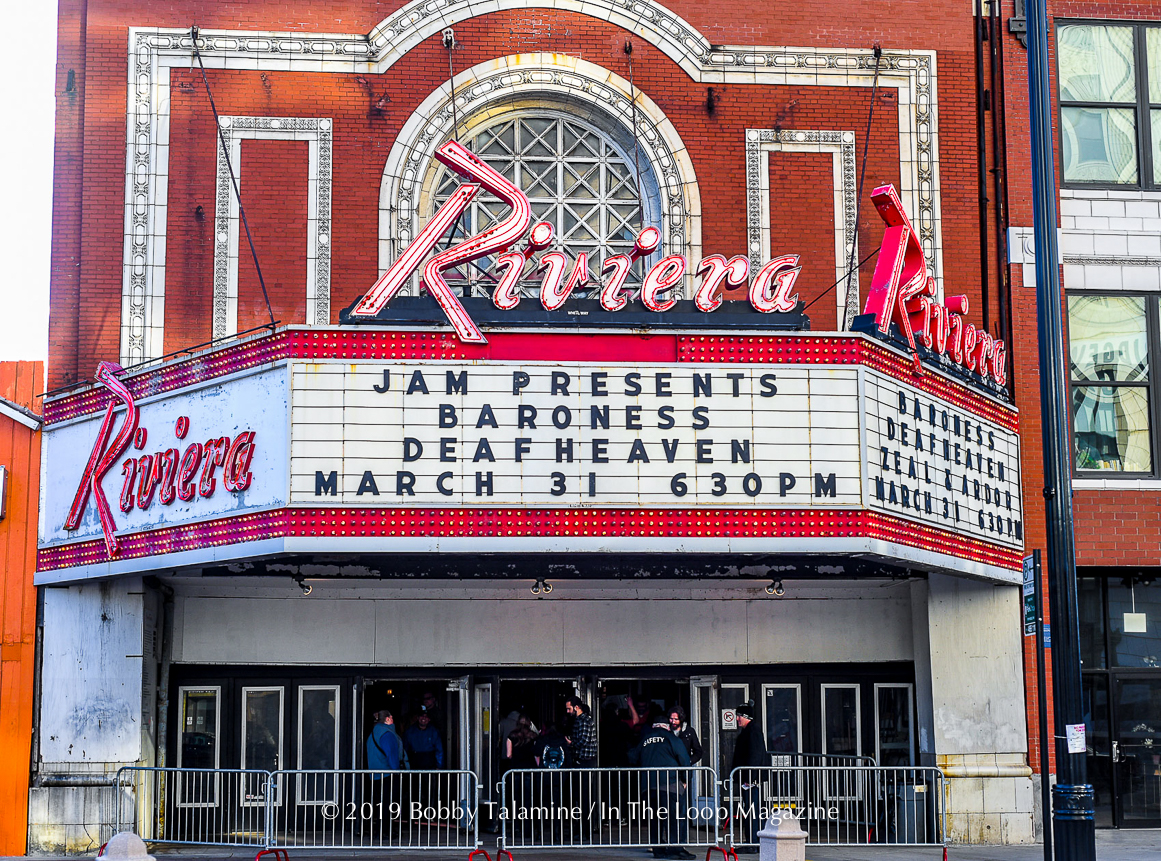 So refreshing to see the mighty Baroness perform live, with singer / guitarist John Baizley front and center, and relishing playing live and onstage surrounded by musicians who truly all give a damn.

This band is having fun, with wicked smiles from everyone throughout, relishing in survival, and living in the moment.

Maybe it does take a tragedy of sorts to come full circle on the beauty of life and living, as so happened with these guys on that dreadful day back in 2012, when their tour bus crashed off a viaduct, leaving them with some severe injuries.

John Baizley is such a fearless dude- uncompromising, honest to a fault, a true fighter of will and might.

That arm injury he suffered from the nasty accident, with a stapled up arm, and photos to prove just how terrible that accident was.

To come out the other end, he was quoted as saying “Baroness doesn’t stop because we got hurt on our way to work”.

So you think we’ve got problems?

Those smiles and gratitude all around, they mean something.

With minimal staging, outside of their trademark backdrop, doesn’t really matter at all..

This band is all about the music, and digging deep into the grooves.

Touring on the strength of their latest release- “Gold & Grey” with Baizley also making an announcement that this would be their last record involving the words of colors, which will be released in June of 2019, the new release will feature their new guitarist Gina Gleason, who’s also touring with Baroness as a full on band member, and she’s up to the task of handling heavy guitar duties with a wicked flair of passion and finesse.

Along with drummer Sebastian Thomson, and bassist Nick Jost, this four piece holds a special place in the hearts of many, with a catalog of songs that are uncompromising and battle tested, and a history that keeps reinventing itself like none other.

And on a Sunday night in Chicago, the fans showed up, truly giving the band a hearty welcome throughout the show, making it known that their brand of metal is most welcome, anytime, anywhere.

For photos of Baroness live in Chicago at The Riviera Theatre, click here

Seen these guys play multiple times now over the years, and their punishing and still so brilliant embrace of beautiful melody are ever apparent and intact, tighter than ever.

In all intent and purposes, the principle players in Deafheaven- Singer George Clarke and Guitarist Kerry McCoy are still creating an array of blisteringly beautiful metal, comprising elements of shoegaze and black metal which truly makes them unclassifiable.

It’s breathtaking to witness them live, hearing their heavenly melodies throughout the onslaught of heavy and nasty guitar, bass and drums.

You have Kerry McCoy stage left /audience right, looking like he came from an all night study of a major term paper, but playing lead guitar and firing off riff after heavy riff, and also George Clarke, clearly soaked from head to toe two songs in, flailing away feverishly all over the stage, yelling / screaming such banshee wails as if he’ll need a throat transplant at the end of their set.

And it’s unrelenting till the end, with George heading into the crowd for some serious bodysurfing, mixing it up with the audience as best as possible, before bounding his way back to the stage to wave a final goodbye with his bandmates.

Have to say I’m exhausted witnessing them firsthand, and I’m not even playing an instrument.

Widely and critically acclaimed, these dudes of Deafheaven, and rightly so, performances intact, gorgeous music intact as well.

For photos of Deafheaven live in Chicago at The Riviera Theatre, click here

Honestly, opening for the mighty Baroness, arriving early to the show- I didn’t know what to make of these guys.

Zeal & Ardor are classified in Wikipedia as a “Swiss avant- garde metal band”.

That doesn’t truly tell the whole story, and truth be told, “avant- garde” ain’t totally it.

Upon witnessing these guys firsthand, I think a better term would be “Gospel Metal”, or something thereof.

You swear you’re hearing gospel and downtrodden blues from a church, then suddenly you’re lurched into a blazing array of fierce metal to backup the forlorning, with fire and brimstone testimony from their Lead Vocalist / Guitarist Manuel Gagneux.

Every song had the same punishing and uncompromising M.O.

Backing Vocalists Denis Wagner and Marc Obrist, are front and center, flanking Manuel center stage right and left, not buried in the back of the stage, or next to a drum kit, which adds to the choral gospel and spirituals and makes things all the more convincing in their performance.

Definitely tonight’s crowd at the Riviera Theatre ate it up, with lighting burning and blazing red, and black metal acting as a catharsis to the proceedings.

Guitarist Tiziano Volante, Bassist Mia Rafaela and Drummer Marco von Allmen all added the extra punch to the music as well, feeding the frenzy with which Manuel creates his longing for righteousness and redemption in soul, through the likes of some heavy blast beats of all things metal.

All n’ all, a convincing and memorable opening act for this triple bill tonight.

For photos of Zeal & Ardor live in Chicago at The Riviera Theatre, click here