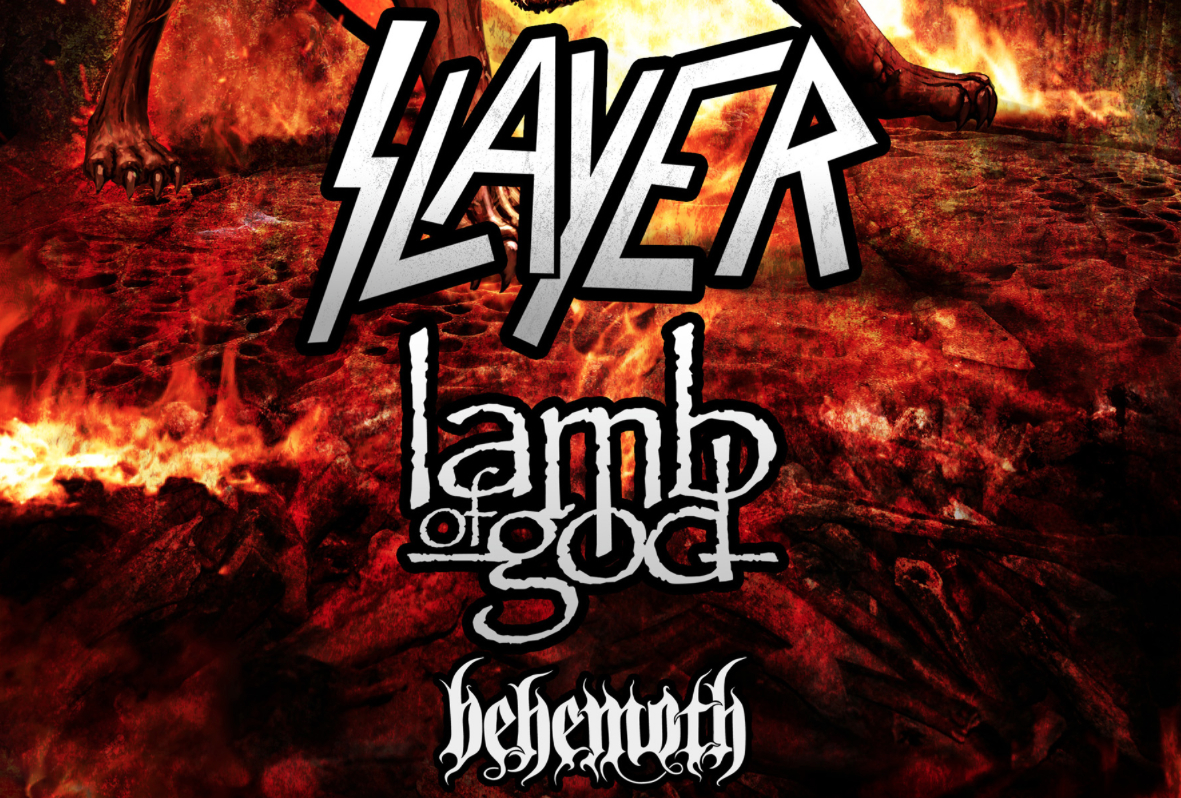 LOS ANGELES, CA – Tuesday, February 28, 2017 — There are many perilous ways one can spend time off – Volcano-boarding down Cerro Negro, Nicaragua’s active volcano, or maybe bungee jumping from a helicopter over the bubbling crater of Chile’s Villarrica.  How about a visit to Sao Paulo’s Snake Island, home of some 4000 golden lancehead vipers whose venom can melt human flesh, or shark diving without a cage in South Africa.  But nothing is quite as hazardous or risky as a night in the pit at a Slayer concert.  Add to that the ferociousness of Lamb of God and Behemoth, and you’ve got a Satan-approved triple bill of Biblical proportions.

The six-week expedition will rage across North America beginning July 12 in Bemidji, MN, winding up in Phoenix, AZ on August 20.  Slayer and Lamb of God will also play Wisconsin’s Rock Fest 2017 (7/13) and Rock USA 2017 (7/15), and then meet up with Behemoth at the Chicago Open Air Festival on July 16.  Tickets go on sale this Friday, March 3; log on to www.slayer.net/tour for all purchasing details.
Kerry King/Slayer Quote:
“As metal tours go, this is the one that your fellow metal heads will be bragging about if you miss it! Not very often I get to go on tour where we are all friends to start. That being said, the potential for greatness at these events is mind blowing. I look forward to being a part of it, and hanging with old friends- bands as well as fanatical fans! Let the festivities begin!!”
Randy Blythe, Lamb of God Quote:
“It’s been a while since we’ve toured with the almighty Slayer, & even longer since we’ve hit the road with our friends in Behemoth- I can’t wait! This tour is gonna be the feel-good event of the summer- the gigs are gonna be like the Haight-Ashbury during the Summer of Love in ’67! Ok, so that’s complete bullshit, it’s gonna be absolutely nothing like that, so don’t show up with flowers in your hair looking for free hugs or anything stupid like that. It will definitely be a good fucking time though (as long as your definition of a good time means brutal, caustic, and hideously loud music)- see ya there!”
Adam “Nergal” Darski’ Behemoth quote:
“It is with the utmost pride we are announcing the Slayer, Lamb Of God and Behemoth Summer tour! We are beyond excited to be joining this bill with these living legends and… our friends one more time! We are also stoked about coming back to North American shores for the last time before kicking off the next album cycle. Come and join this EXTREME metal feast with us!”
Confirmed dates are as follows.
JULY
12   Sanford Center, Bemidji, MN
13   Rock Fest 2017, Cadott, WI (Slayer and Lamb of God on this bill)
15   Rock USA 2017, Ford Festival Park, Oshkosh, WI (Slayer and Lamb of God on this bll)
16   Chicago Open Air Festival, Toyota Park, Chicago, IL (Slayer, Lamb of God and Behemoth on this bill)
18   Express Live!, Columbus, OH
20   Red Hat Amphitheater, Raleigh, NC
21   St. Augustine Amphitheater, St. Augustine, FL
23   Electric Factory Outdoors, Philadelphia, PA
25   Blue Hills Bank Pavilion, Boston, MA
27   Theater at Madison Square Garden, New York, NY
28   Pier Six Pavilion, Baltimore, MD
30   Municipal Auditorium, Nashville, TN
AUGUST
1   Providence Medical Center Amphitheater, Bonner Springs, KS
2   1stBank Center, Denver, CO
4   The Joint, Las Vegas, NV
5   The Forum, Los Angeles, CA
9   Bill Graham Civic Auditorium, San Francisco, CA
11   The Cuthbert Amphitheater, Eugene, OR
12   WaMu Theatre, Seattle, WA
14   Encana Events Center, Dawson Creek, BC  CANADA
15   SMS Equipment Stadium, Fort McMurray, AB  CANADA
17   KettleHouse Amphitheater, Missoula, MT
19   Isleta Amphitheater Albuquerque, NM
20   Comerica Theater, Phoenix, AZ