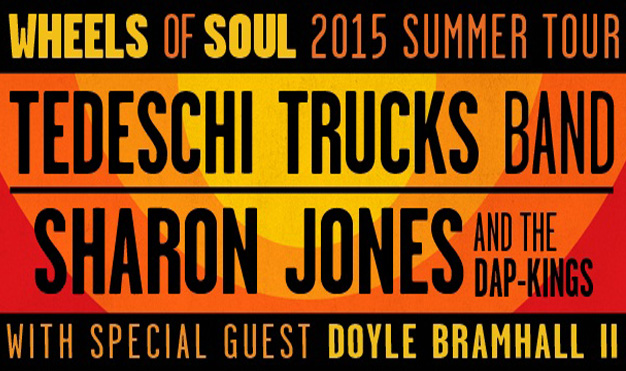 This is definitely the Rock ‘n’ Soul tour of this summer! The Tedeschi Trucks Band and Sharon Jones & the Dap-Kings started this summer tour on June 5 in Paso Robles, CA and rolled into Ravinia Festival this past Sunday. Doyle Bramhall II will be the opening act on most dates of this 20 date tour and appeared at this stop on the tour. The show ended with all bands (over twenty musicians on stage) playing a couple jamming encores.

Doyle Bramhall II is the son of Doyle Bramhall I, who was the drummer for the blues legend Lightning Hopkins. Doyle Senior was also a regular collaborator with Stevie Ray and Jimmie Vaughan. Doyle II toured with Jimmy Vaughan’s band, The Fabulous Thunderbirds as the band’s second guitarist when he was eighteen. He co-founded the rock band Arc Angels with Charlie Sexton using Double Trouble (Stevie Ray Vaughan’s band) as the rhythm section. Eric Clapton has stated that Doyle is one of the most gifted players that he has encountered.

Doyle started his show at 6:28 and played for about a half hour. I wish that he was given more time for his set as I wanted to hear more from this gifted guitarist. The highlights of his show were “So You Want It to Rain” and a Muddy Waters cover “She’s All Right”. I am definitely going to see him again when he comes to town.

This was the first time that I saw Sharon and the Dap-Kings and I was amazed. I was blown away by Sharon’s soulful energetic performance even before learning that she was a cancer survivor. Her career came to a complete halt in 2013 when she learned that she had pancreatic cancer, which often has a poor prognosis. Sharon underwent surgery and chemotherapy and is now cancer free and in good health.

The Dap-Kings started their set with an instrumental song and were introduced by the guitarist, Binky Griptite. After that, the backup singers (The Dapettes) Saun and Starr sang two song from their new album, Look Closer. Then Sharon came out and started her set with “If You Call”. Each song got better as she gave it her all for each song she sang. Sharon gave powerful renditions of “Heard It Through the Grapevine” (Marvin Gaye) and “In Every Beat of My Heart” (Gladys Knight). Sharon got the crowd dancing with her 60s dance song medley. She even invited a fan up on the stage to dance with her on the song “He Said I Can”. Sharon ended her set with ” Get Up and Get Out” performing the song like Tina Turner. It was a great ending for her set.

Blues Grammy Award winning band, Tedeschi Trucks Band (TTB) took the stage at 9 pm at Ravinia for a set of rock, blues and soul songs. The crowd really started getting into show with their Beatles cover of “I’ve Got a Feeling”. Kofi Burbridge shined on the flute for “Idle Wind” jamming with Derek on the guitar. The crowd started dancing to ‘Keep on Growing” a cover of a Derek and the Dominos tune. Mike Mattison took the vocal leads on “Get What You Deserve”. Susan was jamming like many of the blues legends that she has previously shared the stage on the Bobby Blue Bland cover “I Pity the Fool”. Derek and Susan tore it up on the guitar for the final song in the TTB set “Bound for Glory”.

The encores were a great ending to a great day of music at Ravinia. All of the bands shared the stage and played “Tell Mama” and “Sing a Simple Song / I Want to Take You Higher”.