Van Halen Fans Danced the Night Away in Tinley Park 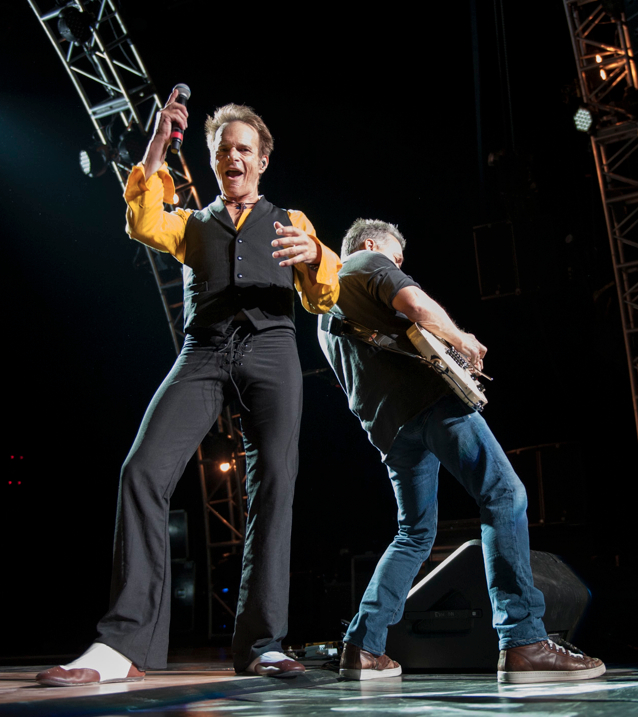 Van Halen’s fans had a lot of treats Friday night at the Hollywood Casino Amphitheatre in Tinley Park. Their set list included a lot of rarities and songs that have not been played in over thirty years. They opened the show with “Light Up the Sky” from the second album, a song that has not been played live in over 35 years. They then went into a string of their popular songs like, “Runnin’ With the Devil”, “Romeo Delight” and “Everybody Wants Some!!” They then played a few rare songs which included, “Drop Dead Legs” and a live debut song, “Feel Your Love Tonight” which was last played live in 1998. Those were followed by “Somebody Get Me a Doctor”, another song that has not been played much.  Other classic Van Halen songs from the first Roth era were rolled out including a “In a Simple Rhyme” which was last played live in 1978 and “Dirty Movies” was another live debut song.

Roth and the Van Halen boys also played some newer material, “She’s the Woman” and “China Town” from A Different Kind of Truth but soon returned the classics like, “I’ll Wait” from the 1984 album. Eddie’s son Wolfgang held down the bottom end throughout the classics and proved he’s a true musician on the new tracks.

Alex Van Halen still doesn’t miss a beat as he went into his drum solo which had a latin electronic-techno kind of rhythm. Although I miss the days of his spinning drum cage solos, it was still very impressive and lasted about 3 minutes. (check out the video of this)

Even though Roth, a little “wiser” than his 80’s heyday self, may not be able to hit the notes like he used to, he still proves to be the great showman. He broke out his trademark rock star poses, ran all over the place, engaged in audience banter and mugged for the cameras.  His version of “Ice Cream Man” was very different than I have seen before. He had a more bluesy intro with harmonica and told a story about the most expensive food he ever ate – a $60,000 chili dog. Apparently on the 1984 tour, he had a craving for a hot dog from this landmark place called “Pink’s” in Hollywood.  He told the driver to stop off there before going to the airport because he had a craving.  He also explained this was during his “I was like a guy who won the rock n roll lotto days” and didn’t have a care in the world, especially for being very responsible or on time for things.  So, when he finally did arrive at the airport, he missed his flight which was supposed to be taking him to the next stop on the tour. He had to charter a private jet to get there on time and when he got the bill it was for $60,000. Roth said, “ I don’t even know what the $60,000 hot tasted like, cause I just wolfed the fucker down”!

Van Halen continued with the classics like, “Unchained” and “Ain’t Talkin’ ’Bout Love” before Eddie got the center stage spotlight for his guitar solo. Eddie can still shread on his solo which contained “Eruption” and “Cathedral”. His solo’s are still a highlight of the show.  The crowd went crazy as he teased notes back and forth.

Wrapping down the night was their cover of The Kink’s “You Really Got Me”.  This seemed to be the end.  I guessing due to time constraints, they did not do a proper encore and just continued the set by ending the show with Roth asking the audience, “Do you want an encore?!”  the crowd erupted back and they continued with “Panama” and “Jump”.

Overall, it was a great show to hear a lot of rare songs from the early catalogue as well as some songs that have never played played live before.