Two of Chicago’s Finest Light Up Stage in ‘Midsummer’ 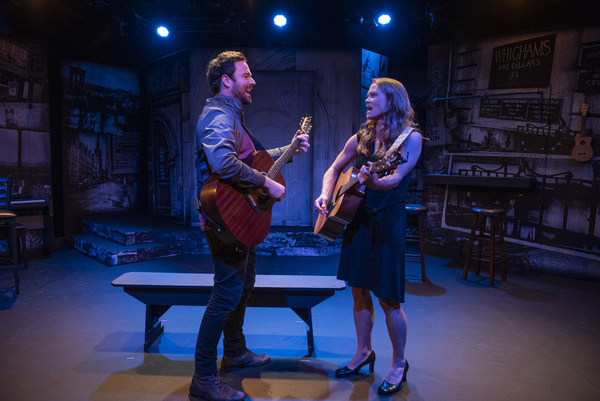 Of all the things I love about Chicago’s theater scene, there is perhaps none that I adore more than this: that I am just as likely to see talented actors on a small, modest neighborhood stage as I am on a grand stage downtown – that this is an artistic community where actors feel inspired to experiment and push their craft in more intimate spaces.

Such is the experience of “Midsummer (A Play with Songs),” which features the talents of Patrick Mulvey and Chaon Cross, two noted Chicago actors who regularly grace the stages of The Goodman, Court Theatre, and Chicago Shakespeare. Yet here they are, on the quaint stage of Greenhouse Theater Center, performing a delightfully Scottish, wholly unique production that is equal parts folkie musical and tender romance.

Set in Edinburgh, the story is a simple one – high-powered attorney Helena (Cross) hooks up with petty thief Bob (Mulvey) for a one night stand, but their unique pasts and present aspirations make for a series of adventures over the rainy midsummer weekend; amidst all that activity, Cross and Mulvey perform numerous folk songs with five musical instruments, tackle 16 unique parts, and do so with spot-on Scottish dialects. It’s all a very impressive undertaking, and then there is this remarkable fact on top of everything else: as William Spatz (Greenhouse’s president) noted in the program, “Midsummer’s” playwright, David Greig, does not stipulate which actors speak which parts, and furthermore, does not offer any stage direction.

Yet, under the direction of Randy White and the musical direction of Jeremy Gentry, Cross and Mulvey positively glow in this setting, with their remarkable charm and comedic timing carrying the audience through the show’s 95 minutes. Rather than a disorganized, floating show, Greig’s open structure instead provides a fertile ground for the talents of Cross and Mulvey, and they perform the material with precision and engagement.

So as the summer season wanes and we embrace autumn, I can think of no better way to send the season off than with “Midsummer.”

Tickets are available at greenhousetheater.org, or by calling 773-404-7336