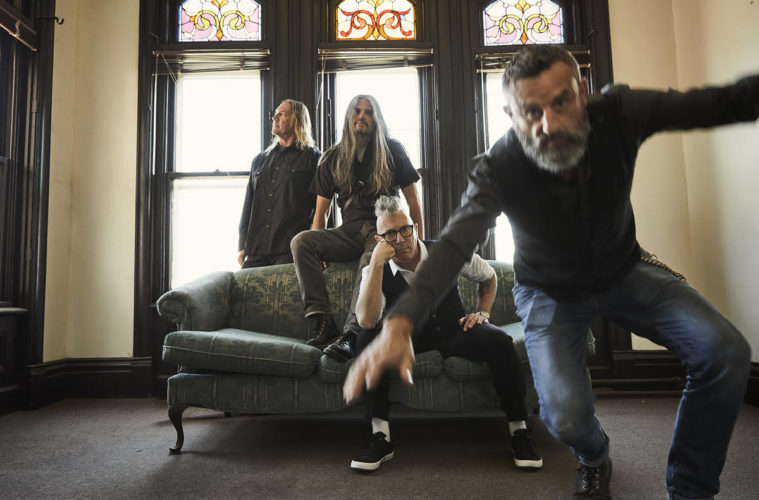 Most bands form, record, and disband in the length of time that has separated Tool’s two most recent albums – 2006’s “10,000 Days” and this year’s “Fear Inoculum” – and watching their incendiary two-hour set Sunday at the United Center, my astonishment was twofold: one, that myself and thousands of other fans were actually experiencing new Tool music in a live setting; and two, that if anything, Tool has only gotten better in the ensuing decade-plus, and remain one of the most vital, challenging bands in the present rock landscape.

Alternating between new and classic material, the principle trio of Adam Jones (guitar), Justin Chancellor (bass), and Danny Carey (guitar) remains unbelievably precise, if not peerless. Indeed, it was downright thrilling watching the group tear through the extended instrumental passages of such tracks as “Pneuma,” “Schism,” and “Intolerance,” and to feel the group’s complex rhythms and burning intensity ripping through the space; how the United Center’s infrastructure survived this show, I’ve no idea. Coupled with the band’s trademark visuals – claymation/3-D graphics projected across an immense screen in the background – it all made for an event of sometimes exhilarating, sometimes exhausting, sometimes terrifying soundscapes.

It is worthwhile to pause for a moment and dwell on the overwhelming virtuosity of Carey. Now 58 years old, the drumming god – who, aptly, was dressed in a Michael Jordan jersey and shorts – was a percussion dynamo at every stage of the concert, pummeling his drum set and keeping perfect pace with Tool’s odd time signatures. The arguable highlight of the concert, in fact, came in “Chocolate Chip Trip,” an instrumental track from “Fear Inoculum” that was transformed into a heart-stopping showcase for Carey involving multiple percussion instruments; even a gong, incredibly, played a mind-blowing role in the performance.

And then there is the enigma of Maynard James Keenan. The vocalist and frontman for the band, Keenan’s oddball charisma was on full display. Clad in one of his more low-key outfits – leather jacket, mohawk wig, and yellow checkered pants – Kennan alternated between two elevated stages behind the band, and in addition to his vocals (which remain clear and powerful), he engaged in various oddball antics; for instance, during “Schism,” Keenan picked up an amplifier and, obscuring his body behind it, walked across the stage in a cartoonish manner.

Yet, there was also that obligatory Maynard moment – the point in the concert where he addressed the audience with an utterly head scratching, unnecessary remark. For the United Center concert, it arrived early: following the band’s opening performance of “Fear Inoculum,” Keenan switched stages and greeted the audience, stating “Chicago – come for the food, stay because you got murdered.” The remark elicited confused reactions from the overwhelmingly white audience, and after recovering slightly and saying “But the food…it really is great!” Keenan shut up, and the band tore through a sterling rendition of “The Pot.”

While Kennan’s remark constituted a few seconds of the two-hour show, it is worthwhile to cite some statistics to unpack just how ill advised it was: thus far in 2019, there have been 443 murders in Chicago; of that gobsmacking number, 287 of the victims were black, while only 37 were white; the life expectancy in Chicago’s all-black Englewood community is 60, while in wealthy, majority white Streeterville, it is 90; and among young black men in Chicago, an incredible 45 percent are either unemployed or out of school. Of course, these horrifying facts are the end result of a century of segregationist public policy, which has made Chicago among the U.S.’ most segregated areas. As the scholar Keeanga-Yamahtta Taylor put it, “[Segregation] has cut Black people off from the best jobs. It has strangled public schools, public hospitals, libraries, parks and clinics of desperately needed resources. It has isolated and demoralized young and old.”

Which brings us back to Keenan’s remark: “Chicago – come for the food, stay because you got murdered.” Where would Keenan have heard such a phrase? Well, it’s something that white suburbanites routinely use to chide the city for its violence. Memes abound across the Internet. Websites sell t-shirts bearing the phrase. And it all is, of course, wholly ignorant of the inequality and despair actually driving Chicago’s murders (which, it should be pointed out, never touch tourists visiting Chicago for the food).

Why do I spend so much time on this? Frankly, because I expect better of Kennan and Tool. Frequently praised as the American Radiohead, Tool has carved out a niche as a uniquely thoughtful, philosophical band, and on such tracks as “Parabola,” “Disposition,” and “Reflection,” they are all that and more. So then why, if you’re Kennan, do you make such a remark? It’s a mystery, and thankfully, it was not enough to obscure what was an otherwise masterful, virtuosic concert.