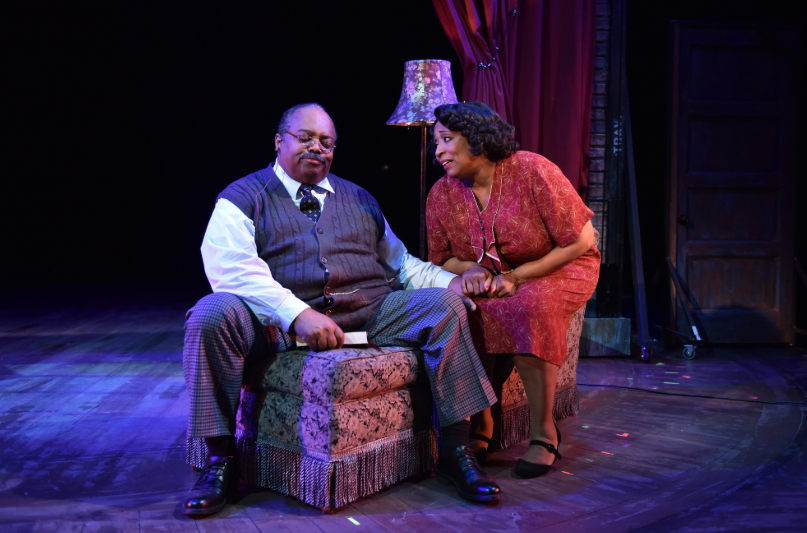 “Gypsy,” the classic 1959 musical from Arthur Laurents (book), Jule Styne (music), and Stephen Sondheim (lyrics), is that most interesting of artworks – an exceedingly popular work that is frequently misinterpreted and misunderstood. Perhaps it is the wide range of songs that have been elevated to the zeitgeist, chief among them “Small World” and “Everything’s Coming Up Roses”; perhaps it is the musical’s legendary overture, which spotlights Styne’s melodies to a marvelous degree; or perhaps it is the fact that the musical’s lead character, Rose, was originally portrayed by Ethel Merman, a singer whose bold, expansive vibrato has provided parody material for decades. Whatever the reason, it is remarkable that the central conflict of “Gypsy” – that Rose is a deeply delusional, disturbed individual whose neuroses are both unsettling and dangerous – somehow gets left out, and it is an enormous credit to Porchlight Theatre and director Michael Weber that their production presents Rose’s instabilities front and center.

Based on the memoirs of real-life burlesque dancer Gypsy Rose Lee, “Gypsy” tells the story of Rose, the domineering mother of sisters June and Louise. Bitter over never having become a star herself (and bearing the considerable scars of three failed marriages), Rose convinces herself that June will be a great vaudeville star, despite two very inconvenient facts: first, that vaudeville is an art form of waning cultural significance; and second, that Rose is a uniquely awful director with no artistic vision, and saddles her daughters with performing material that would be laughable were Rose’s convictions not so disturbing. After driving away June and a very patient fiancé, Rose finally sees success, albeit not in the way she expected – Louis, the one daughter she never considered for stardom, thrives as a burlesque dancer, an art form that Rose disdains.

Through it all are some of Broadway’s most treasured numbers, although as previously mentioned, when viewed in their proper context, these are hardly the fun show tunes of charity balls and public television budget drives. “Everything’s Coming Up Roses” is a perfect example. Arguably the finest musical moment in the show, the number closes out the first act, and it represents Rose at her most unhinged: June, the daughter she had groomed since birth for vaudeville stardom, has eloped with a fellow performer to start her own act, and is long at last beyond the clutches of her domineering, psychotic mother. Does Rose respond with any self reflection, any mea culpas? Oh no, not Rose. Instead, she defiantly announces that Louise will now be the star of the show, and that they will, at long last, be the success she has always dreamed about; hence, everything is coming up roses, but only in Rose’s deeply warped perceptions of reality.

And performing this remarkable material is a remarkable cast. As Rose, E. Faye Butler presents a character that in no way harkens back to Ethel Merman, Patti Lupone, or any of the Broadway legends who have taken on the role. No, Butler’s Rose is a wholly unique creation, one who is particularly unhinged and delusional. With a marvelously strong voice and enough stage presence for three actors, Butler is mesmerizing, and is reason alone to see the show. I cannot ignore the considerable talents of the remaining cast members, however, particularly Daryn Witney Harrell as Louise and Aalon Smith as June. Like all musicals, “Gypsy” is one that is highly flexible to a director’s vision, and I appreciated the tenderness in which Weber directs Harrell and Smith – these are sisters who lean on each other for support to withstand their mercurial mother, and the duet they share (the gorgeous “If Momma was Married”) is a show highlight.

If there is any note to conclude on, it’s this: “Gypsy” is an undeniable high point in American musical theater, and Porchlight is one of Chicago’s finest theatre companies; thus, it should surprise no one that this production of “Gypsy” is a must-see, and that it will delight and challenge any fan of the theater.