The Worlds Most Dangerous Kult Takes Over Chicago Suburb. How My Life With The Thrill Kill Kult Took On A Weekend Of Fresh Souls At Wire. 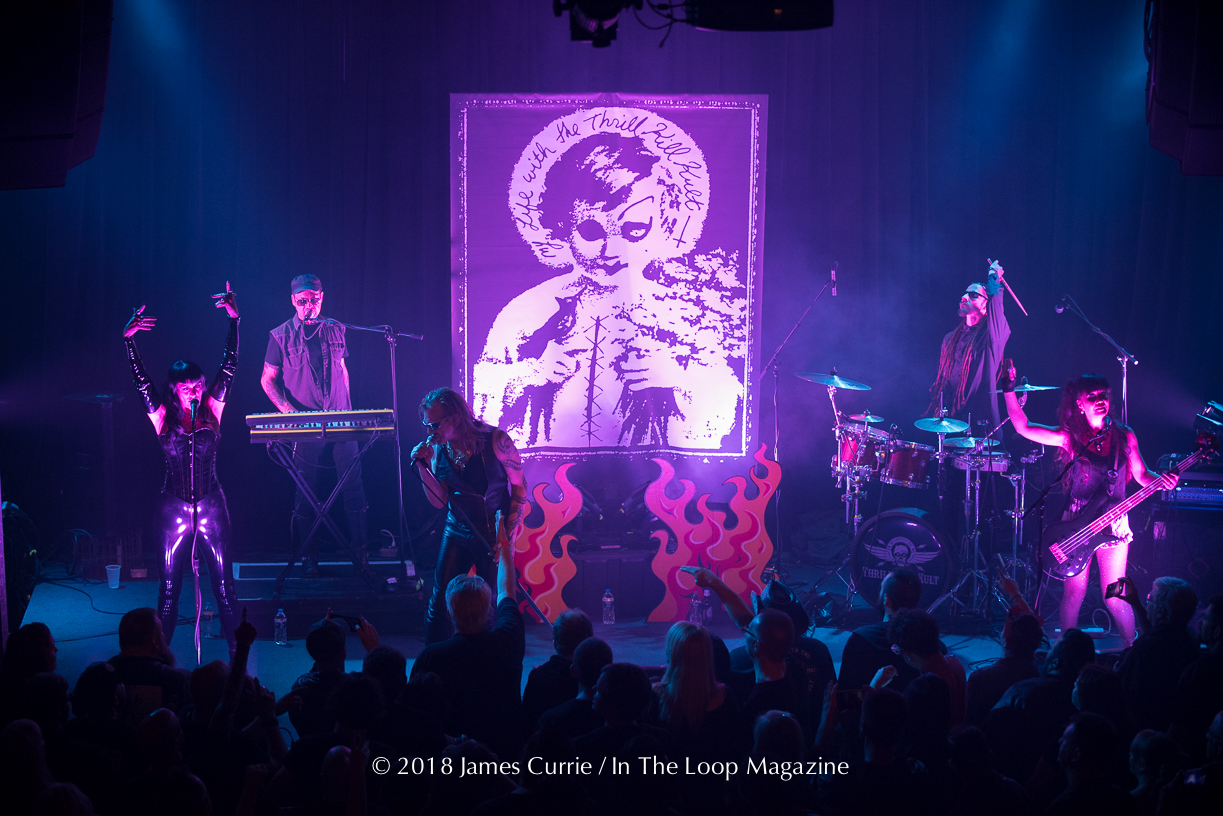 My Life With The Thrill Kill Kult may have started as a goof art school film project but after thirty years has proven to be anything but a novelty. Groovie Mann and Buzz McCoy have been making tongue in cheek evil dance music together since 1987 and this tour marks a major milestone in their career as one of Chicago’s most recognizable industrial dance acts. This weekend proves their staying power as they sold out the western suburb club Wire in no time. So fast and so much demand was made for it, a second show was added by promoter Paul Panicali of MUSH MUSIC to appease their congregation saying, “This show was our largest surprise by far.”

For this first of their two night residency, we find TKK at one of Chicagoland’s newer live music venues Wire. It’s not a place you’d normally expect to find a band of this caliber, but it worked and in more ways than one proving, if you build it, they will come. Located on the border of North Berwyn and South Oak Park, right on Roosevelt road near Oak Park Ave, the club holds about 400 people. It has a large main floor and an intimate upstairs VIP lounge lined with vinyl on the walls and decked out in vintage music related gear. The venue itself is fairly well equipped for live sound and modern enough to keep fans coming back. It’s easy access from the city and surrounding burbs. There’s free parking and some pretty good food choices lining the street.

The night started with a couple opening acts. The first was Biocarbon13. A three piece industrialesque band fronted by what appeared to be a seasoned vocalist and two younger players. They were a solid industrial band whose singer wasn’t confined to just the stage as he made random visits to the pit and beyond. The second was Conformco whose mantra was “We’re old skool Chicago Industrial”. This apparently is a supergroup of sorts. A mix of local Chicago musicians like Sean Payne of Cyanotic, Chris Harris of Project .44 and other guy that we couldn’t make out, but balanced out the team nice. They played a pretty solid set that included a pretty decent cover of Revolting Cocks, “Attack Ships On Fire”. They got my feet tapping and I ultimately enjoyed them. Maybe next time we see them they will have it together a little more as it seems one player couldn’t make it. The drummer was MIA (in the hospital?), but at least they had all his beats on backing tracks. The show must go on!

Time for the main event. Thrill Kill Kult came out around 10:45PM, fairly late for a headliner, but it soon proved worth the wait. On this tour, they are playing their first couple Wax Trax! Records albums, “I See Good Spirits And I See Bad Spirits” and Confessions Of A Knife” in their entirety. What a treat this was. I mean, we know and love the hits like, “A Daisy Chain For Satan” and “Kooler Than Jesus”, but how often do you get to hear deep cuts like, “Universal Blackness”, “First Cut” and “Heresy”?

This was something special for all true fans. The whole notion of bands playing albums in their entirety was kind of a novelty when the rage first started, but has now grown into a must for all bands. This is something that tells fans, this is for you. A thank you for helping make us what we are. It’s all immersive. Takes you back to that time when you first heard those albums. Not like today where everyone wants a single or cycling through a streaming service that plays only the hits. In doing that, you miss what the artist was trying to fully convey. You miss the true writing process that artist go through in making a record. This is something to experience and getting it live and in person is the ultimate way to get it. You just can’t replicate the live experience. The sounds. The interactions. The fan comradery. The lights, fog and smells around you (I smell good pits and I smell bad pits) make it all real and personable.

Before the end of the night, we got a special guest appearance by a former TKK band member and former Bomb Gang Girl, Kitty Killdare (AKA Laura Gomel), who joined the band in a rendition of “Devil Bunnies”.

So what have we learned from 30 years of TKK? We’ll, that they are much more than just an art school project. They’re Kooler than us by far. They helped define a genre that is just as popular today as ever and have a legion of hardcore fans that have supported them since the beginning. Also, they make great music for film scores, to grove on the dance floor to and to some, to fuck by. Sure the band has had many incarnations, but the spirit is still there. The message is still there. The tongue and cheek fun is still there. Groove and McCoy will always be My Life With The Thrill Kill Kult, but they know how to bring in and keep the talent fresh. This line up is working really well together. Mimi Star has been holding down the low end for some time, but newcomer Justin Thyme seems to blend in like an original. They’re also joined by Arena Rock who backs some high notes from time to time and dawns a slick black pleather jumpsuit that looks like it was painted on and still wet. You go girl! I’d say in the 15-20 years I’ve been following them, this is one of the strongest I’ve seen in at least the last decade. And that’s saying a lot since this is the end of the tour and most bands are pretty spent, home town show or not.

Somehow, Groovie and the gang still make this fun. The sheer audience numbers prove it. This is a show you will dance to. A show you can chant to and the audience did just that. During “A Daisy Chain For Satan”, the audience howled along louder than Groovie! Hell, if you’re really ambitious, get laid to. No one around you would mind. Especially not the band.

Sadly, this tour is over. There is the one extra late added night tomorrow night here in the same place. A bonus to that is that, old friend and fellow industrial musician, Chris Connelly (Ministry, RevCo) has been added to the bill doing a solo set at some point during the night. If you can’t make that, you’re out of luck. At least for this tour. But hang tight member of the congregation, it’s about time for a new record from the band. Be on the look out for a fresh and new tour in the coming year. You won’t regret it.

For photos from the sold out show on April 28th, click here