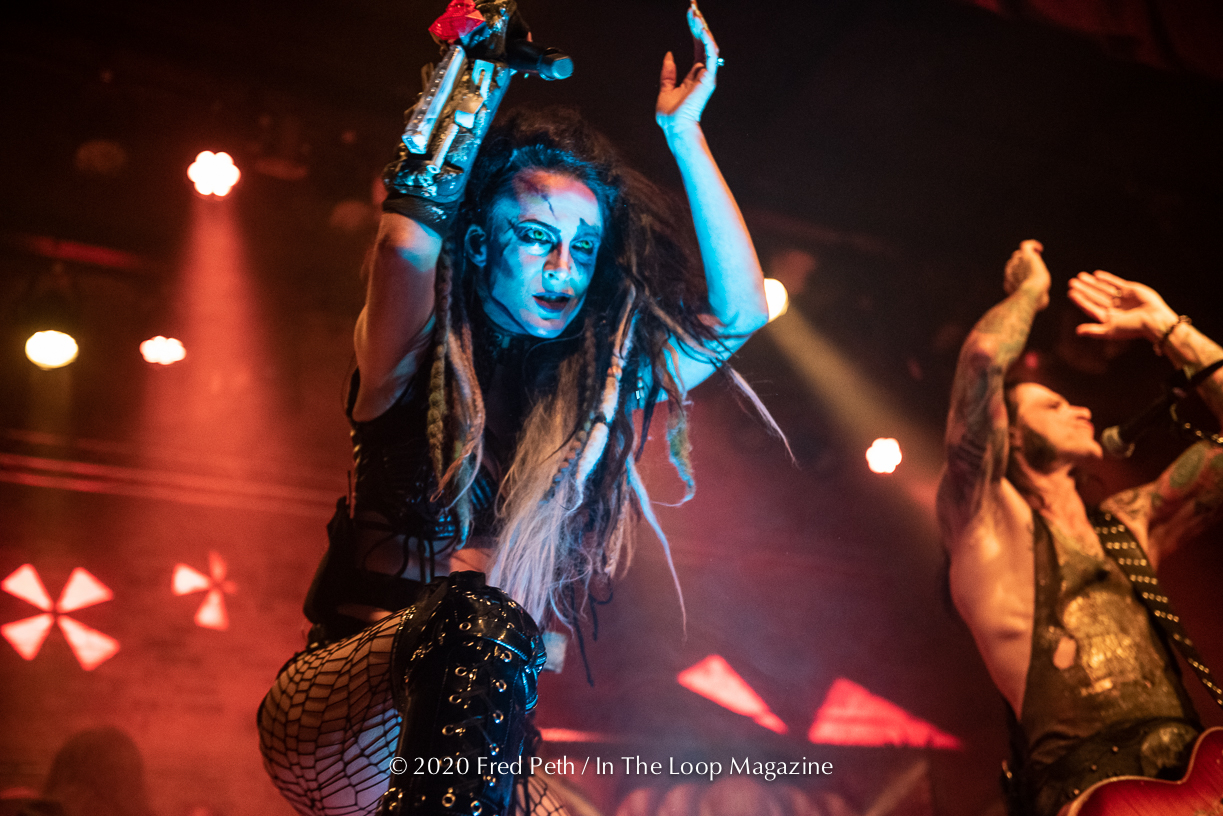 Beastö Blancö started back in 2012 by Chuck Garric (lead vocals and guitar) and Chris “Brother” Latham (guitar) who together had a bunch of song ideas they wanted to bring them to life. What better way to do that, than with a new band. Throw in Calico Cooper (vocals) (yes, that Cooper) with her striking stage persona and diamond edge vocals, and they had the start of solid new band. Rounding out the band is (normally) Jan LeGrow (bass) (this night a substitute as the COVID-19 US travel ban prohibited his presence) and Sean Sellers (drums). The name Beastö Blancö derived itself as a character that Chuck came up with reflecting on what their music sounds like. Being influenced by bands like Motörhead, Rob Zombie and Aerosmith, Beastö Blancö did not want to simply be a copy of these band’s sounds, but come up with something to stand out with on their own. They decided to stick with the grittiness and blue collar feel to their music and look. Their live concerts definitely show this through their insane talents, stage presence and ability to feed off of one another.

With the venue’s lights low, the band took to the stage and opened up their set with their high-energy song “Freak” from their 2013 release Live Fast Die Loud to a cheering crowd. Sean started the pace of the song with his timely drum beats as Garric and Latham strummed in with the axe sounds. Machine Girl, Cooper, came out in a black two-piece rocker outfit accompanied with black spider web leggings and sky-high black leather boots. In true theatric metal style with face paint and wildly colored dreads in her hair.

The crowd quickly got further amped into the show as the band moved back and forth on the stage like a machine in motion. Pushing the song to another level and getting the crowd to participate, Garric flipped his guitar over his head and had the crowd singing their “Hell Yeah” part of the chorus.

Cooper got her time to shine during “Machine Girl”. It’s good to see her not only use her creepy moves to project the song, but also her amazing voice. She has a demonic part during the song, where she thrashes around and even the band doesn’t know where she’ll end up. The rhythm section took to the front of the stage to give the audience a punishing mix of heavy riffs.

If there is one song that defines Beastö Blancö sound, it’s “Grind”. The song hits on all cylinders. It’s truly an in your face, dingy track. A track for the people who know what it is to work hard for what they want and know it’s a dirty, bumpy road to get there.

They did an excellent job of making “Feed My Frankenstein” their own. A lot of bands just do covers of a song to fill their stage time, but not Beastö Blancö. They took the song and recreated it into their own. Garric and Cooper trading lead vocals back-and-forth. This is one song that Alice Cooper himself is extremely proud of as his bassist and daughter take it into a new direction.

Beastö Blancö has the raw power and writing ability to be around for decades.  Catch them in a city near you on their current 2020 tour. Also pick up their latest album We Are that came out in 2019 or their other two albums Beastö Blancö and Live Fast Die Loud. You’ll not be disappointed in the energy and power they bring to the live stage.

For photos from the show at RocHaus, click here

6. Perception Of Me (from We Are album)

11. Solitary Rave (from We Are album)