Squirrel Nut Zippers Return To The Chicagoland Area For One Night At Club Arcada in St. Charles 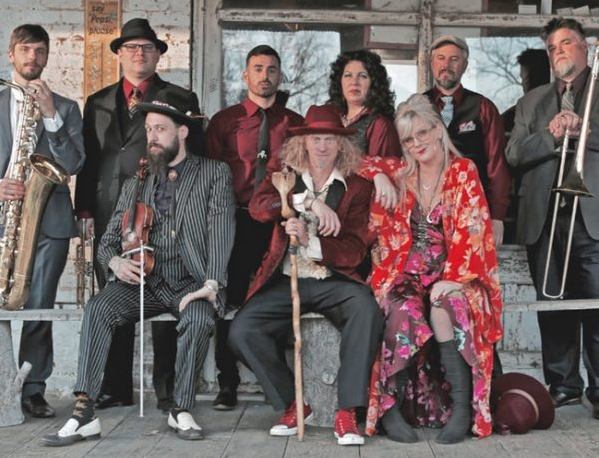 Platinum-Selling Jazz Rockers Squirrel Nut Zippers & The Dirty Dozen Brass Band Team Up For Midwest Tour The Two Bands With New Orleans-Inspired Rhythms Will Perform A Quirky Mix of Jazz, Folk, Punk Rock And A “Musical Gumbo” Of Bebop Jazz, Funk And R&B Platinum-Selling Jazz Rockers Squirrel Nut Zippers (SNZ) have announced that they will be, once again, joining forces with The Dirty Dozen Brass Band for a special series of Midwest shows.

Kicking off January 25 in Green Bay, WI, the tour will hit such cities as Chicago, Peoria and Omaha before culminating in Kansas City, MO February 1. These select dates will precede the SNZ’s highly-anticipated “Inevitable 25th Anniversary Tour,” which commences March 5. Visit www.snzippers.com for the most up to date ticketing information.

SNZ, whose most recent studio album titled Beasts Of Burgundy debuted at #4 on the Billboard Jazz Albums Chart, have released eight studio records throughout their career including their pivotal album Hot (1996). Lauded for taking their signature style of anti-establishment sound to commercial radio, Hot was the band’s sophomore album and was certified Platinum in 1997.

“The Zippers have always been full of outlandish characters which provides great self-referential material for songs,” said co-founder Jimbo Mathus, whose motto to “let the music lead” still rings true. The Dirty Dozen Brass Band, who toured with SNZ frequently in the 90s, is celebrating more than 40 years of their unique “musical gumbo” sound – a blend of funk, R&B and bebop jazz.

Performing in more than 30 countries across five continents and releasing 12 studio albums, the group’s nontraditional sound has led them to collaborate with many artists, including Modest Mouse and Norah Jones.

The official dates for the Squirrel Nut Zippers and The Dirty Dozen Brass Band are as follows: