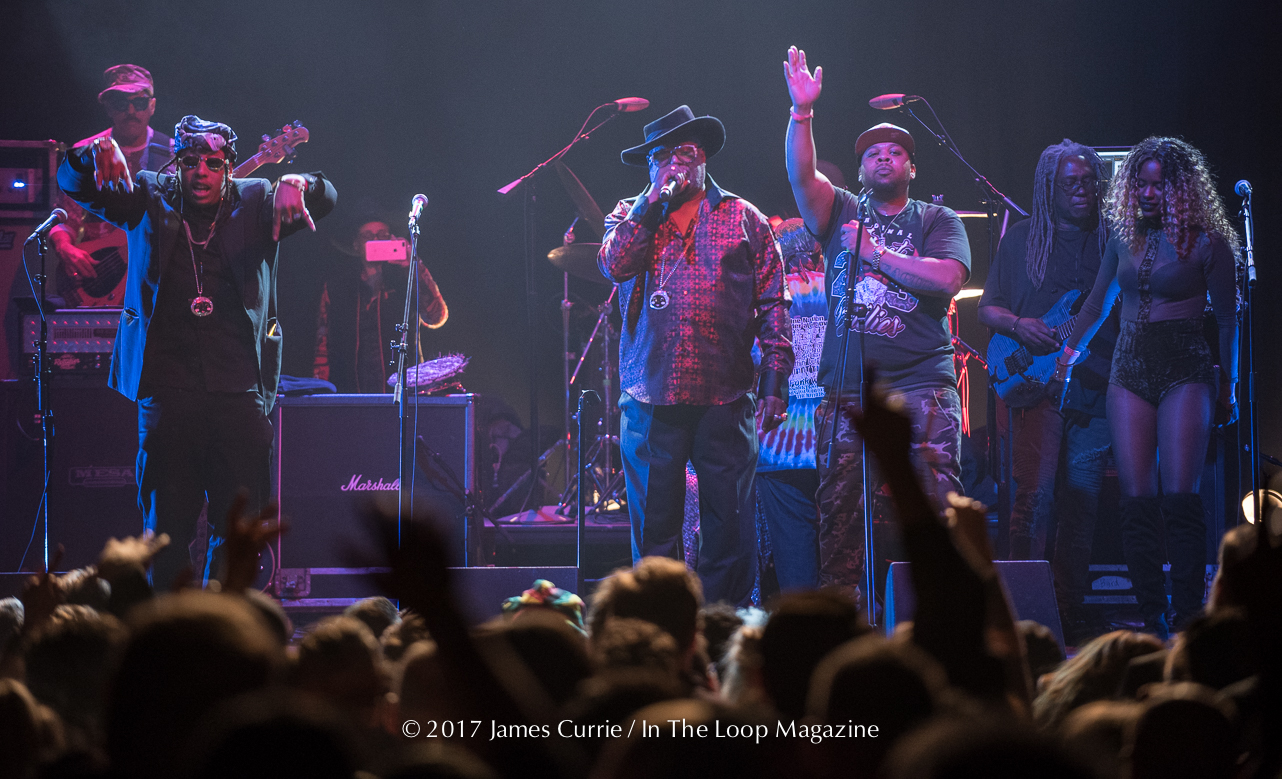 George Clinton (75) came back through Chicago this past weekend proving without a doubt, age is but a number. His Parliament-Funkadelic group of more than 45 years strong is not only still touring, but still selling out venues across the US. The Pilsen performance at Thalia Hall on Sunday night dubbed, “Mardi Gras Madness Tour”, proved “The Atomic Dog” is still the funkiest mutha in the land as he and his band of extraterritorial brothers and sisters (over sold) the house of more than 1300 fans. It was standing room only leaving but one thing for fans to do, “Free Your Mind and Your Ass Will Follow”.

I’ve seen George Clinton play live for over 20 years. This was the best show I’ve seen and here’s why:

Talent and Band: P-Funk has seen many line up changes throughout its illustrious career, that’s just how things are in live music. Clinton has held the core down while bringing in some of the industries most talented individuals to the like Bootsy Collins, Bernie Worrell and Roger Troutman (Zapp & Roger) to name just a miniscule sample. The full list of the “Funk Mob” would take up several pages and is a story on its own. George knows talent and always brings it in.

This round of 2017 players is incredible. They are tight, play off each other extremely well and just gel. There was soloing, duets, change overs and group participations that only Clinton can command.

Time and Stamina: This show at Thalia Hall was by far the longest performance I’ve ever seen them do. It was three hours long! Seriously, this was not only a commitment, but they gave the fans their monies worth and then some. They played through all the hits with Funkadelic and the mighty classic of Parliament and yes, “Flash Light” was included.

George Clinton himself: Not to harp on the age thing and this is by no means an insult, rather major compliment, but I know my grandpa could not do what Clinton does almost every night of every year. He still tours constantly. He’s still making records today. Uncle Jam was on stage and performed right along side his band the entire show. He did take a seat from time to time, but you could see he didn’t want to. Even when he did, he was still fully amerced and active. Flailing his arms, enticing the crowd to chant or clap along, pointing out his band-mates achievements and more. There is a reason he is called, the grandfather of Funk and this show, along with numerous of his piers prove why.

The Rock n Roll Hall of Famer sounded and looked completely with it. He was sharp. He was on time. He was accurate. He sings along with the songs while highlighting his parts like it was forty some years ago. He engages the audience not in a “schticky” way, but honest. He loves his fans. He appreciates their time and what they’ve invested in him. There was a couple in the upper stage left balcony that really seemed to have caught his attention. The man looked like a clone of Dr. Funkenstein from the mid 70’s. A slender, bearded man in makeup dawning a large onyx necklace and period ensemble (minus a shirt), the girl with classic oversized afro wig and glammed out to the max. Both dancing like no ones looking, but George was. Once they caught Clinton eye, he seemed to be in awe, smiling, giving his approval, pointing and throwing the horns up.

He’s reinvented himself. Clinton is still the same madcap man (minus the rainbow wig and platform boots) that once flew on the Mothership, but now with style, sophistication and grace. The Grammy Award owner has proved what he wanted, but still manages to make something old, new again. The songs are slightly reworked for today’s audience, but not enough to take away from what made them legendary. He’s changed enough with the times to stay relevant and not a parody.

Near the end of the night, Clinton made comment on stage to the fans, “We are all, all of us, ONE NATION!” Making it clear that we were all one. All mattered. All there for the funk and love of one another.

I spent a few moments with Clinton after the show. We talked briefly about things. I asked how this tour was going. Clinton responded, “Good, good, you know, just taking it as it comes.” He was pretty exhausted as you can imagine and was short on time and answers. He promised more at a later date but still gave me a couple teases. I asked how he can still do what he just did up there (on stage) for three hours. Clinton chuckles, smiles, leans back and said, “I’m not sure most times, it just happens.” “I love it man, just love it.” Seeing that my time with him was fading quickly, I simply asked a non rock star question, “How you’re fishing doing this year?” “Ha, never get enough time for that”, Clinton replied, “But love it when I can.”

As we wrapped up our conversation, a band mate came up to him and said, “Hey George, take a look here, someone wants to say hey.” As he brought up a laptop and Facetimed with a friend who was in Paris France. They conversed like it was nothing. Clinton’s still a tech junky. After all these years he still on top of his tech. He controls his iPad’s, computers and studios like it’s the back of his hand. Again, something my grandparents aren’t doing. He’s even still an Apple fanboy, maybe the original?

George Clinton and the P-Funk All Stars tour 2017 is one not to be missed. This is the mini tour dubbed “Mardi Gras Madness Tour” It’s only a few dates, but there are more coming this year. If you’ve never seen him/them before, now is the time. They are on top of their game. Parliament Funkadelic are icons in the funk rock industry. This tour pairs together a supergroup of players that are still making funking history. 2017 marks George Clinton’s 50th year as a hit maker and shows no signs of stopping anytime soon. Clinton and Co. are proving they are still the most important force in funk. If they come to a town near you, go. I guarantee they’ll Give Up The Funk and Tear The Rood Off The Sucker.

For more info on George Clinton, Parliament, Funkadelic and P-Funk, including the Mardi Gras Madness and rest of 2017 tour, click here

For photos from this performance at Thalia Hall, click here

For a video sample from this performance, click here

Setlist for George Clinton and Parliament Funkadelic live in Chicago at Thalia Hall, 02-19-17