Slowdive Build Upon Their Shoegaze Legacy At The Vic 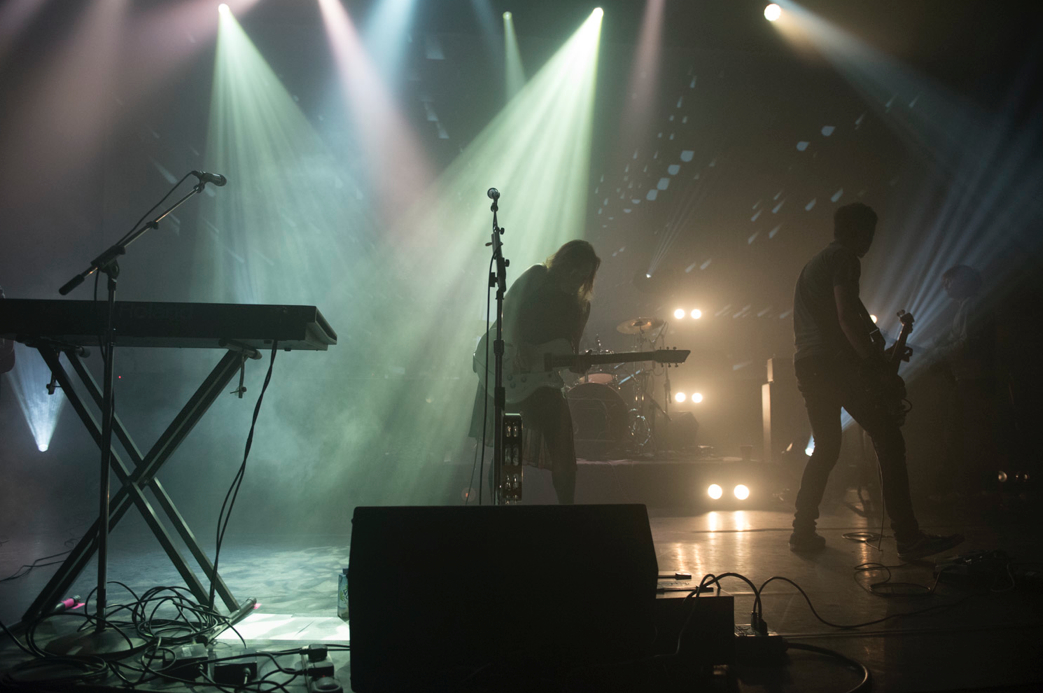 Yesterday, the Vic Theater hosted the legendary shoegaze band Slowdive in a sold-out show, drawing all manner of fans, young and old, familiar and new. The band touched on their old material along with songs from their new album Slowdive, released this year to great acclaim. Widely known for being one of the last true examples of the “shoegaze” genre, Slowdive brought a refined and elegant sound to what was otherwise a fringe genre of music characterized by effects-laden guitar riffs and ethereal vocals. Although critically lauded for their first two albums, Just for a Day (1991) and Souvlaki (1993), Slowdive fell victim to a harsh critical and commercial backlash that resulted in the release of Pygmalion (1994), their last album, and their breakup shortly afterwards. Twenty-two years later, the musical landscape changed considerably and favorably to the genre as seen in the return of several other shoegaze bands such as the Jesus and Mary Chain, Lush, and Ride. With such bands returning to venues all over, the re-emergence of Slowdive after such a long period was a major sign of the tremendous popularity shoegaze currently enjoys, making yesterday’s performance at the Vic especially memorable.

Before Slowdive, the indie-rock band Japanese Breakfast opened the show. A solo project led by Michelle Zauner, the former member of the band Little Big League, Japanese Breakfast proved to be an exceptional opener for Slowdive. Playing music from their album Psychopomp (2016) along with some new material, the band combined dark, solemn lyrics with a lean funk sound. In addition to their music, Zauner’s charismatic presence drew much of the audience’s interest as she switched effortlessly between guitar and singing duties. In between songs, she joked with the audience and managed to excite everybody for Slowdive’s eventual turn. The best song from their set, “Machinist”, a tale of human-robot love, showed Zauner’s commanding presence at its best as she let the music carry her from one end of the stage to the other with the rest of the band keeping in step with her energy. Altogether, Japanese Breakfast was, in my opinion, a brilliant opener and in fact, a band that came dangerously close to upstaging the headliners.

Once Slowdive walked onstage, bathed in dark purple light, I could not believe that I first heard about Slowdive only a few months ago at a record store near my place of work. The owner pulled out their album Pygmalion after a brief chat about shoegaze music. Slowdive, he insisted, was a diamond in the rough and a band that demanded a listen from everyone who was interested in the genre. Balking at the album’s exorbitant price ($40!), I bought another album instead and went home to listen to Pygmalion on Youtube for the cheap price of free. Upon hearing the first stretch of “Rutti”, I could not believe what I was hearing. Expecting to hear hypnotically wistful vocals and a wash of guitar riffs, I instead heard an ambient, experimental sound composed of unintelligible vocals and dull arrangements. In fact, the record resembled Talk Talk’s Laughing Stock instead of the hard-hitting shoegaze masterpiece Loveless. After repeated listens, I still could not form a favorable opinion of the album and then moved to their previous release, Souvlaki. Slowdive’s Souvlaki proved to be the catalyst for my interest in their music. Listening to songs such as “Alison” with Neil Halstead’s melancholic vocals to “Machine Gun” with its volcanic melody acquainted me with the band’s near-legendary reputation. If anything, I felt sheepish to have begun my foray into Slowdive’s music with Pygmalion. Moving forward to yesterday’s performance, I did not know what to expect, except that I would be seeing one of the greatest shoegaze bands of all time.

I was right from the minute the drums began to thunder, the bass began to tremble, and Rachel Goswell’s haunting voice began to sing. After two decades, the band still sounded amazing. Beginning with the song “Slomo”, Slowdive covered material spanning their entire discography, ranging from Just for a Day to new material off their latest album. The experimental sound of Pygmalion that I found utterly strange and alienating took on new life as Slowdive injected the songs from that album such as “Crazy for You” with gravity and pathos. The lumbering, volcanic and hypnotic sound, entranced everyone, and lulled them into a state of euphoria. In between songs, Goswell joked with the audience and did a fantastic job of keeping the audience engaged. In addition to the quality of their sound, their set reached a number of high points. The new song “Star Roving”, proved to be one highlight of the set, with its thunderous melody, buoyed by Goswell and Halstead’s enchanting vocals. However, Slowdive were often at their best during their soft and leisurely moments. One such moment came when they began playing “Alison. Listening to Neil Halstead’s melancholy voice, the expansive sound and the lush instrumentation on a grand stage such as the Vic was perhaps, the best moment of their entire set.

While Slowdive was indeed flawless, I found their show to be a rather tame affair. There were no moments during the set when the band truly rocked the stage. In fact, those expecting a show filled with energy and excitement will be sorely disappointed to discover that much of the band’s greatness lies in their quiet, expansive, and contemplative sound. I will say though, that such a quality is essential to the essence of a great shoegaze band, for the power of shoegaze lies in its appeal to reach the individual as opposed to an entire audience. Bearing all of this in mind, for those interested in listening to Slowdive, do not expect to be floored by their music. Instead, savor the sound like a fine whiskey, and cherish the fact that you are listening to Slowdive, the stewards of shoegaze and a band in firm possession of their sound, their mettle, and their legacy.

For photos from the Slowdive show at The Vic, click here