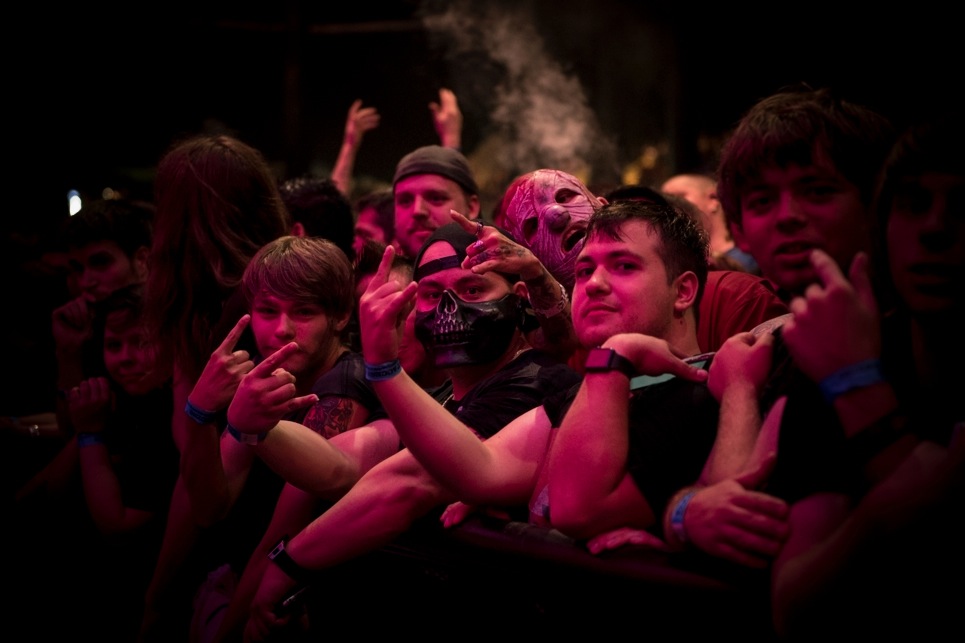 “This is the biggest crowd we’ve played to on this entire tour,” Slipknot vocalist Corey Taylor remarked halfway through the band’s Chicago stop on the “Summer’s Last Stand” tour Saturday night. “And I am so proud that it’s here in the Midwest.” Bands give shootouts to cities all the time from the stage; it’s a time-honored tradition of making the place you’re playing that night feel special. In Slipknot’s case, though, the members of the 20,000+ crowd could be sure that Taylor meant what he said. Iowa’s most successful rock band, signed in Chicago? The midwest is where Slipknot’s dark, nine chambered heart beats, so it was pretty much a guarantee that “The Nine” would level the place. Which they did.

Whether or not Slipknot would even continue to be a functioning entity was a question just a few short years ago. Side projects and the unexpected death of bassist Paul Gray left the band’s future uncertain, and only when they emerged in 2014 with their much anticipated fifth album, .5: The GrayChapter, did the metal world breathe a collective sigh of relief. Combining all of the best elements of what Slipknot do best anthemic, melodic choruses stuffed into a Sherman tank of percussion and guitars layered so thick they nearly do physical damage to the listener the album’s best material fit beautifully into the band’s canon, reaffirming their position as unlikely titans of the rock world.

But of course, like all great bands, Slipknot lives onstage, and the Prepare For Hell tour is a flashy, underworld circus of light and mayhem, which is nearly unavoidable when you have nine people on the stage. Ram’s heads adorn rotating platforms where percussionists Shawn Crahan, aka “Clown” (#6) and Chris Fehn (#3) bang on kettle drums and metal kegs with baseball bats and sticks. A giant demongoat head grinned with evil affectation at the crowd from over the elevated walkways; there was enough fire blasting from the floor to make KISS jealous as guitarists Jim Root (#4) and Mick Thomson (#7) annihilated their way through classics like “Wait and Bleed,” “Vermilion,” “Before I Forget,” and “Disasterpiece.” The setlist offered satisfaction for fans of every Slipknot record, a near perfect balance of new and old, brooding and ferocious, and Gray Chapter tracks like “Killpop,” “AOV,” and opener “Sarcastrophe” sound as though they’ve been road tested for much longer than the year that the band has actually been playing them. Crahan has often remarked that Slipknot shows are a living embodiment of chaos, and seeing the members of the band thrash about the stage, sometimes crashing into each other, jumping and hanging from the risers, only confirmed that viewpoint. Clearly buoyed by a crowd that could only be described as frenzied, the 123 encore punch of “(sic),” “People = Shit,” and “Surfacing” took the last bit of energy from just about everyone in the house, though there was a sense that the crowd would have stayed for as long as the band was willing to play. “How many of you have seen Slipknot before?” Taylor asked at the end of the set, to a joyful roar, followed by a second question.

“How many of you are seeing us for the first time?” The roar this time was bigger, and you could almost sense the smile beneath Taylor’s latex mask. “Look around you. This is your heavy metal family. People want to say rock is dead? I say fuck you.” And the heavy metal family agreed as the band tore into “Spit it Out” from their 1999 debut album. Slipknot’s heart and home will always be in the midwest, and when they next return which, hopefully, will be sooner than later you can bet that the family will be there.

For more on the band, the tour et. al. click here.