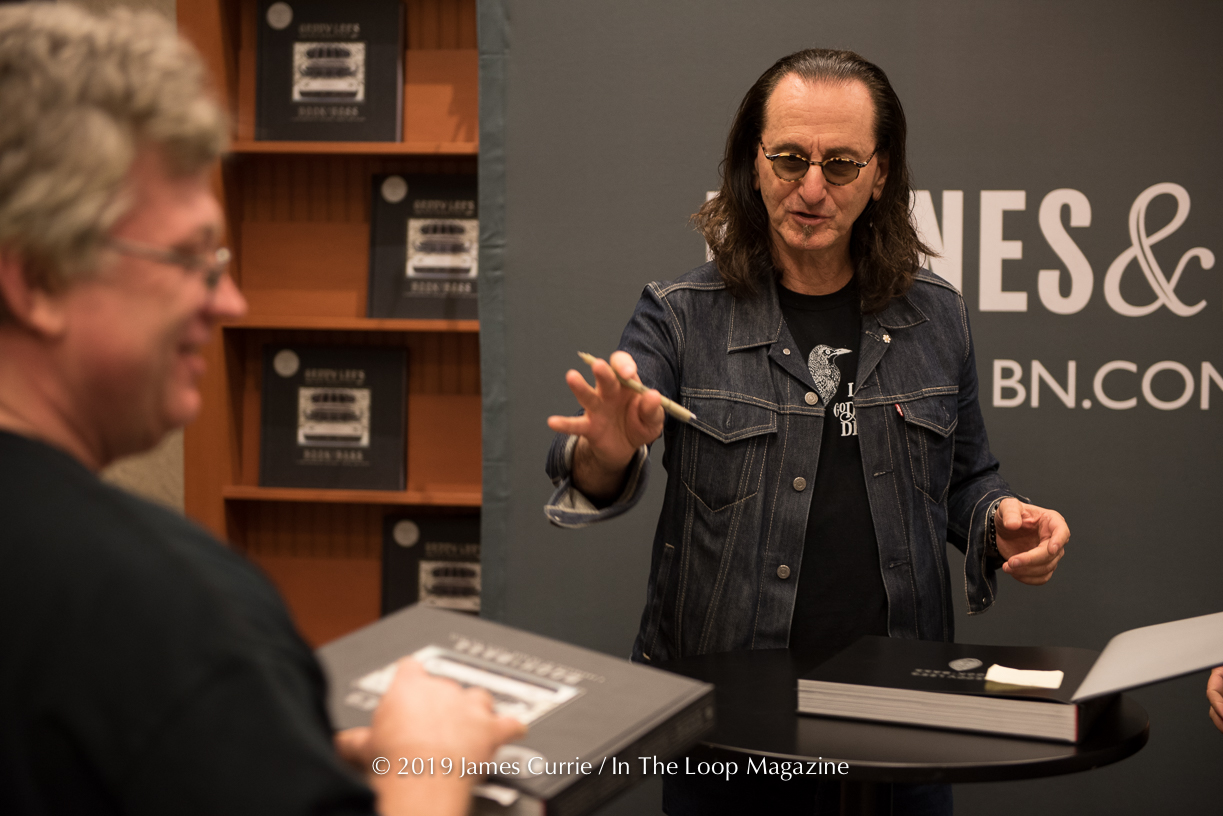 Rock icon Geddy Lee hits the road again only this time, not with his legendary band Rush, but for his literary book, Big Beautiful Book of Bass. This provided a rare treat for fans who stood in line for hours to get their copies signed in person. Today’s stop, at Barnes & Noble in Chicago was one of only seven dates on his U.S. Book Tour. He’ll visit seven cities of gold starting in Nashville and ending in Atlanta.

This massive, 400+ page, 8-pound book (don’t tell the trees), co-authored by Daniel Richler & John “Skully” McIntosh, is a collection of images and detailed knowledge of the bass guitar and his personal collection as well as stories from his fellow bassmates in the industry.

The book begins with a dive into this rabbit hole of a venture, deep in his archives. He shares images and stories from when he first started his rock n roll journey growing up in Canada in the late 1960’s, through his rise to international superstardom with Rush and where he’s at today. As soon as you open the hard cover, presto!, renown photographer, Richard Sibbald captures the visuals that make this archival collection pop. They’re bright, crisp and incredibly lifelike. Each photo alone tells a story.

This was a passion project as Geddy Lee was a man on a mission spending serious amounts of time and money to collect hundreds of vintage bass guitars to get this epic story told.  Spanning nearly seven years to complete, he built this collection while traveling around the world through various tours and progressive hunts. These stories, images and tales resonate from his love of the instrument that propelled him into the limelight.

The book, Lee’s first and only so far, is a shared love affair that includes a few of his friends in the industry like Led Zeppelin’s John Paul Jones, U2’s Adam Clayton, Bill Wyman from the Rolling Stones and the mad man himself Les Claypool of Primus. All of which contribute to the story so far on how the bass guitar influenced them all to become the leaders of their proud profession.

Lee goes into details into how this love affair even happened. He talks about why these instruments are much more than just interesting to look at. He digs deep into the logic, science and literal fibers that all together make up the beloved bottom end instrument. This is done craftfully with his signature twinges of humor interlaced throughout like the wound strings that give thunderous life to his obsession. Fender seemingly his bass of choice, but he explains the reasoning behind what makes that perfect sound.

Move forward a few months and we’re smack dab in the middle of his U.S. book signing. Today, we’re at his Chicago stop of the tour at Barnes & Noble on Webster in Lincoln Park.

People started lining up when the store opened and continued to build well into the evening as 650 lucky fans gained entrance to what will surely be a night to remember. And not one person complained about the cost of admission as this seemingly big money event was baulked at online through various social media forums as being too much. But when you break the $100 cost down, you’re getting the book right from the man who wrote it AND he’s meeting with you AND personally signing it over to you. Remember, the MSRP on the book alone is $100 USD.

The fans were comprised of people of all ages. And yes, there were girls there (referring to classic no woman at Rush concerts jokes). We saw kids as young as 8 years old in line on their own freewill curious to see their rock star hero. Rush shirts peppered the line of would-be autograph seekers wearing shirts that ranged from the last concert ever played to vintage shirts from the 70’s making their rare appearance like some of the Rickenbacker’s in the pages of Lee’s book. It made for great conversations in line as everyone has a Rush origins story.

First in line was an unapologetic superfan Lou Weisbach. He lined up in the early AM before the store opened to make sure and get first position to see the living legend. Weisbach said, “Being here is just something I had to do. I mean, I’m a huge Rush fan and Geddy is the man. I brought some memories with me as well to show like this photo from a few years back” Others in line brought more than just the book to get signed, like bass guitars, albums and photographs, but this tour was about the big black book. Nothing else was permitted.

Lee strolled in right about 6:30 and the crowd went nuts. The decibel piercing cheers and jeers made you feel like a concert was about to start. He posed for some press shots with his book, then the gates opened and the masses began single filling in.

Superfan Weisbach did indeed get in first and was all smiles. Ear to ear. He greeted Lee with the excitement of winning the lottery. Lee smiled and entertained his admiration briefly, as several hundred others were waiting for the same experience. For hours, Lee greeted each and every fan who had a ticket. I can only imagine how exhausted his arms and wrists must have felt lifting those weighty books, signing each one, sealing a dream for the many souls who waited it out. And all this on one of the hottest days of the summer -until the rains came.

Geddy Lee’s Big Beautiful Book of Bass is available nationwide. No need to take off to the great white north as he’ll be finding his way on his book tour for the next week. Always a working man whose time doesn’t stand still for this new world man. You can get a copy at most major bookstores as well as many places online. No, you won’t get it personally handed to you, signed by the author himself, but you will get the most interesting and detailed musical instrument adventure ever documented about the world of bass guitar.

For more on Geddy Lee and his current book tour, click here